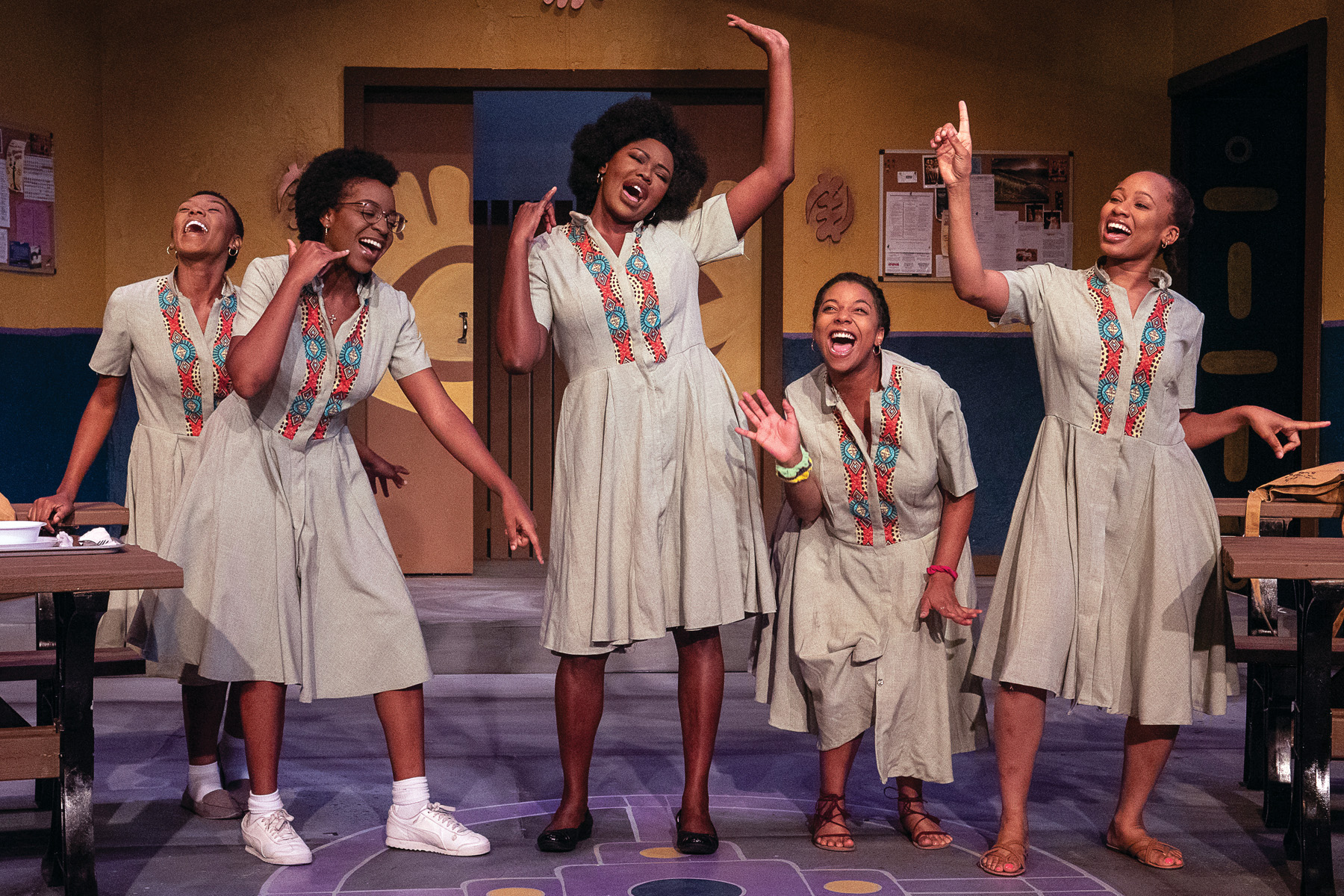 Pictured is the cast of “School Girls or the African Mean Girls Play” singing the Bobby Brown song, “Mr. Telephone Man.” Houston’s Ensemble Theatre, led by Artistic Director Eileen J. Morris, a Catholic, was founded in 1976 to tell stories about the Black experience in America and give opportunities to Black artists. Today, it is one of the most renowned African-American theaters in the country. (Photos courtesy of the Ensemble Theater)

HOUSTON — She wanted to be a nun.

Eileen J. Morris, artistic director for Houston’s Ensemble Theatre, harbored that fantasy, fed by movies such as “The Sound of Music” and “The Trouble With Angels.”
“I loved being around people, I loved the diversity of people,” she said. “I thought that, by being a nun, I could help them.”

God, it would seem, had other plans.

Morris grew up outside of Chicago on a rambling 10-acre farm. Her parents moved north from Houston, looking to shed some of the racism they encountered in the South. They settled in Chicago in the 1950s and then decamped to the country, raising Morris and her three siblings in Pembroke, Illinois. 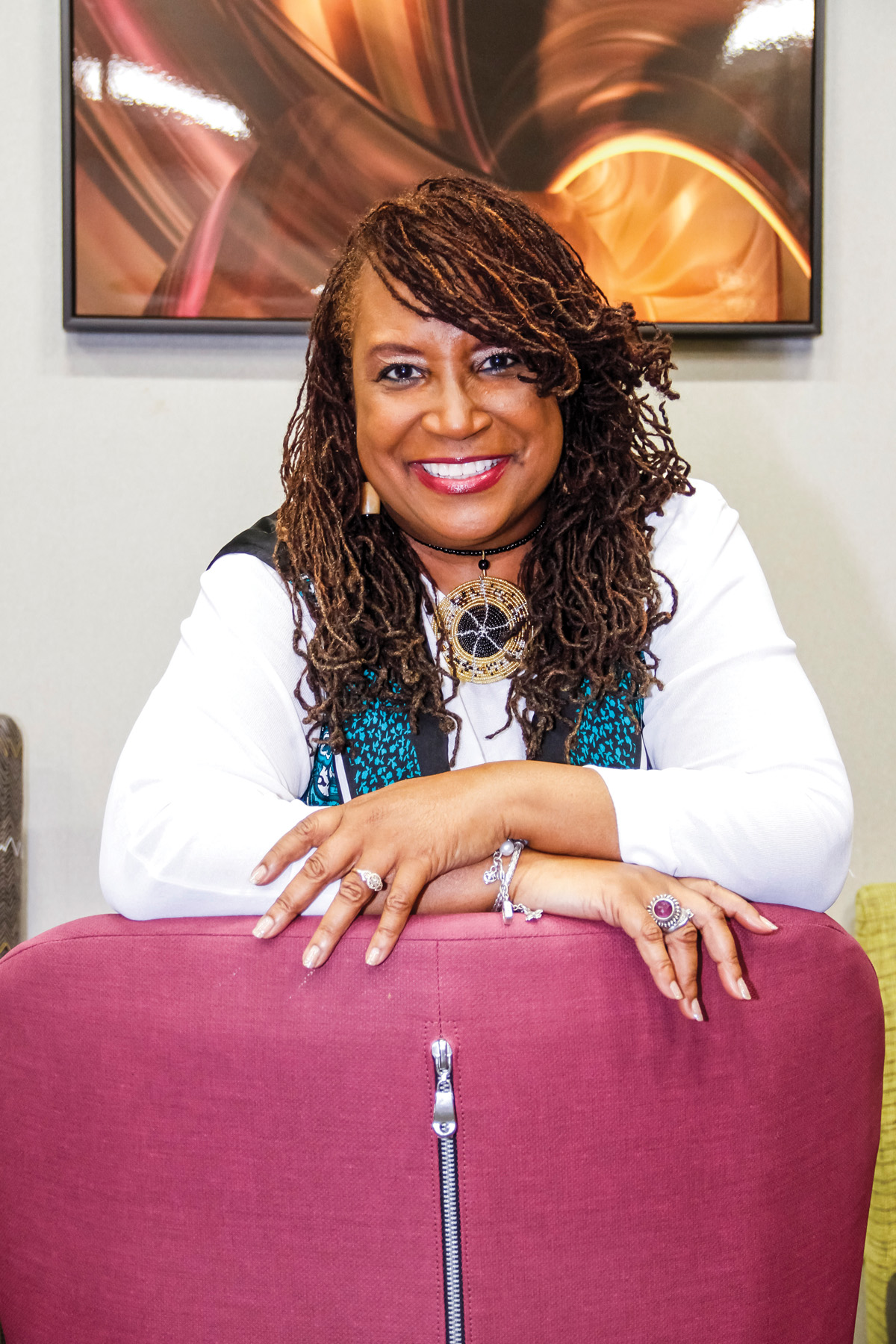 Morris’ father was Baptist, but her mother was Catholic, and her parents made certain the children were raised in the Catholic faith and educated in Catholic schools. Morris and her siblings attended Catholic school for a decade.

“I think about what a sacrifice that was for my parents, to have four kids in Catholic school, the kind of commitment to make that happen,” she said. She and her family helped clean the church to offset the cost of tuition.

Morris said that the rhythms of Catholic school life in the 1960s and 1970s, daily Mass, women religious in the classroom, how the faith underscored everything, gave her insights into the woman she would grow up to be.

She found theater in grade school, and it would be a lifelong love of hers. But, as an African-American child, she wasn’t cast as Cinderella or Snow White.

“Those parts weren’t open to a little chocolate girl who lived in a Black community,” she recalled. “So, I was always looking for ways to express myself.”

At Bishop McNamara High School in Kankakee, Illinois, she was a co-founder of the school’s first Afro-American Club, which sought to provide a space for the school’s Black students to embrace their heritage, and also share that culture with the whole student body.

“It was a chance for us to have our voices heard,” she said. “And Sam Hall, our biology teacher, was our club sponsor. He was also African-American, so it was great to have him as a role model.”

She’d find another in George Hawkins, founder of the Ensemble Theatre, whom she met after graduating college and coming to Houston. Hawkins wanted a way to tell stories about the Black experience in America and give opportunities to Black artists and founded the Ensemble Theatre in 1976.

In the early days of the theater, he’d pack sets and costumes into the trunk of his car and take them to wherever a performance was to be. Today, the theater is one of the most renowned African-American theaters in the country.

For Morris, who started working at the Ensemble in 1982, Hawkins was a kindred spirit. In meeting him, she knew she had at last found the ministry she was supposed to embrace.

“I feel called to entertain, to educate, to show how art can enrich people’s lives,” she said. “It’s important that we, as people, tell each other stories and learn from them.”

When Morris recalls her Catholic upbringing — she and her mother now reside in Acres Homes and Morris still attends Mass — she’s struck by the way the rituals of the liturgical year and the Order of the Mass stand out. Today, she finds that those rituals offer a foundation for her to approach the plays she selects for her theater company to produce.

“We all have rituals in life. Look at August Wilson’s ‘Two Trains Running.’ It’s set in a diner, and there is a ritual to the rhythm of the day there. Who comes in and orders the same meal or takes his coffee the same way; how the waiters know their regulars. There’s a connection in those rituals. It’s the same thing when I think of the Mass and how it connects those who celebrate it.”

Morris isn’t shy about sharing that her art is her ministry, and she wants audiences to be changed by it. She said she often heard from non-Black audiences some form of “Oh, that was so good!” when they see one of the company’s plays.

“Why wouldn’t it be?” she said, laughing. “But still, part of my heart sings when I hear things like that because I know we are telling stories that are universal. They come from the prism of African-American life, but they are universal. They are about family, about love, about traditions.”

The pandemic forced the Ensemble to seek out new traditions, and Morris’ company was one of the first in the city to embrace online programming, hosting virtual sessions of staged readings and discussions.

The Ensemble’s BOLD Online Series will continue the programming until the company can host its regular esason again. In October, they are hosting master classes hosted by Jasmine Guy, famous for her role as Whitley Gilbert-Wayne on the NBC late 1980s show “A Different World.” Other offerings are also available at www.ensemblehouston.com
Online or in-person, nothing is going to keep Morris from sharing art.

“We are all called in different ways,” she explained. “But at the heart of it all, it’s about how do you include others, and how do I share the gifts I have? My art is my ministry. And it is so important that we share these stories about being human together.”