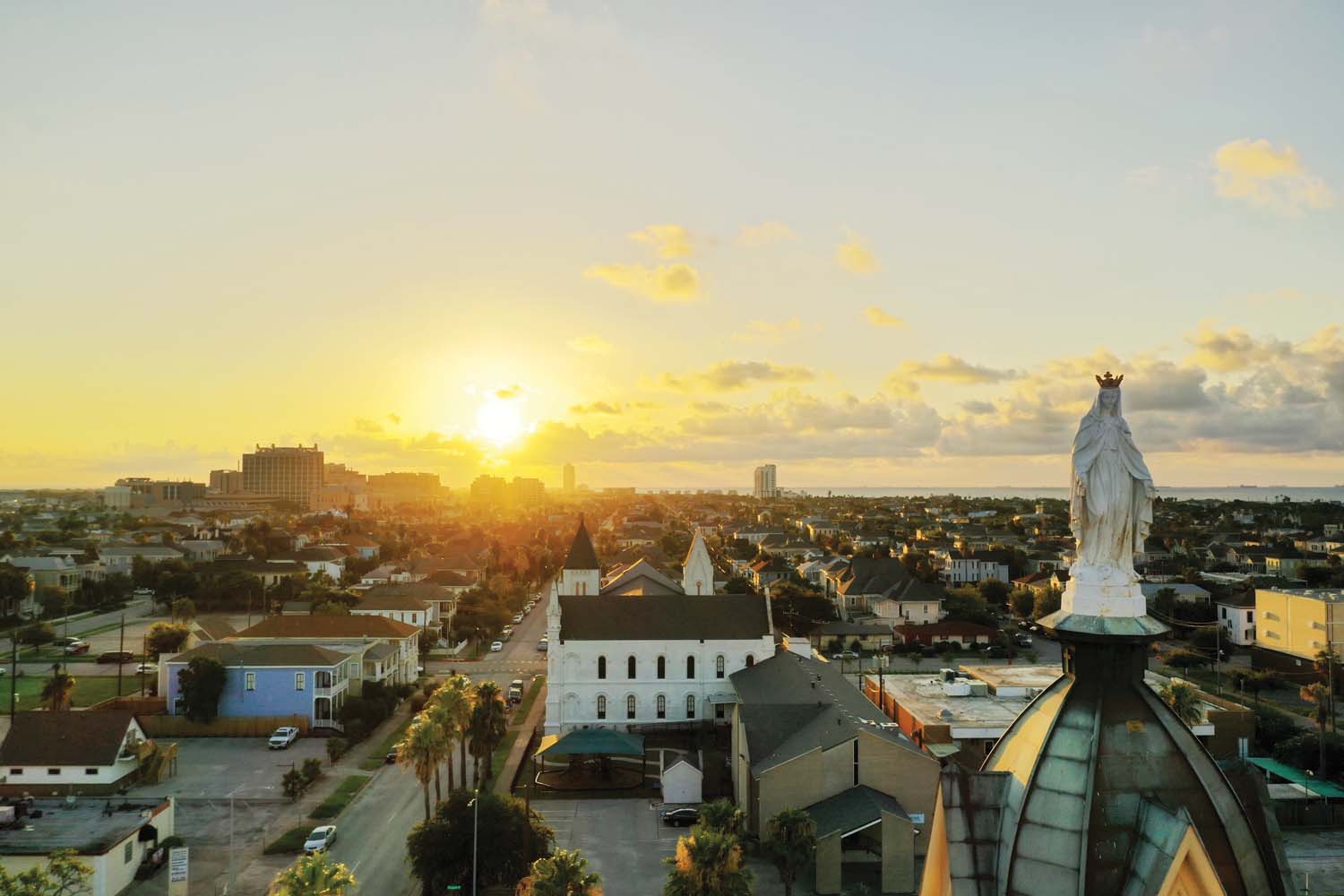 The St. Mary, Star of the Sea statue was installed atop St. Mary’s Cathedral Basilica in 1878. At left below, the mural by Conrad Schmitt Studios is seen behind the marble altar. The mural was a result of the Cathedral Basilica’s renovation effort after Hurricane Ike. (Photos by Zero/Six consulting and James Ramos/Herald)

GALVESTON - The Blessed Virgin Mary might have the best views of all Galveston Island, sunrise or sunset. But for now, the statue of St. Mary, Star of the Sea, has been temporarily removed from atop the historic St. Mary Cathedral Basilica as both the statue and church receive facelifts.

When workers carefully lowered the 11-foot, 3,000-pound cast-iron St. Mary statue to the ground Sept. 24, the rust spots and corrosion were visibly noticeable. The overall Basilica roof, including the place where the statue sits, will undergo repairs at this time.

“There will also be waterproofing on part of the church building, repairing the two spires from regular wear-and-tear and even doing some stained-glass restoration,” said Steve Faught, the Archdiocese’s construction and preventive maintenance director.

The restoration process at 2011 Church St. in Galveston for both the statue and roof may take up to two months for completion. But the entire project will continue through April. The statue will be kept in a ground-level enclosure on the property during the entirety of the restoration.

The Archdiocese is collaborating with Coltzer Company and Zero/Six Consulting on the current restoration project consisting of structural and building exterior repairs.

Bill Coltzer, project contractor, said this $1.5-million repair project is focusing on the longevity of St. Mary’s Basilica. The Cathedral Basilica has endured many storms since it was built in 1847, including being one of the few Galveston landmarks to survive the 1900 Great Storm. The Cathedral Basilica was designed by architect Theodore E. Giraud, with later work by Nicholas Clayton.

“Star of the Sea,” translated from the Latin “Stella Maris,” is a title for the Virgin Mary, and the statue was added to the Basilica in 1878.

Father Jude Ezuma, pastor, said, “We feel blessed to have this jewel as part of Holy Family Parish. The ongoing restoration work has caused great excitement in the parish and the local community.”

He added, “We are very grateful to the Archdiocese for help in providing funds to undertake this massive project. With this restoration work, the Basilica will continue to remain a beacon of hope for all who come here to pray and a true testament of the endurance of the Catholic faith and presence on the island.”

In 1979, in recognition of the cathedral’s importance to the community as well as the historical impact it had on Catholicism in the state of Texas, then-pope St. John Paul II elevated the St. Mary Cathedral to the status of a minor basilica.

In 2008, the cathedral was damaged significantly during Hurricane Ike with the storm surge pushing eight feet of water into the sanctuary. The interior of the historic church building was completely renovated and returned to full service in April 2014.

To donate to the St. Mary Cathedral Basilica restoration fund, visit www.archgh.org/restorestmary. Information about donating to the restoration project will also be available at the Basilica campus.

For any additional donation questions call Michael Schillaci, director of development, at 713-652-4418 or mschillaci@archgh.org. †

While St. Mary Cathedral Basilica, built in 1847, may not be the oldest church in Texas, it is the first cathedral in Texas and one of two cathedrals of the Archdiocese of Galveston-Houston. The following is a brief look at the lengthy 172-year history of the Mother Church of Texas.

1847 — Pope Pius IX establishes the Catholic Diocese of Galveston on May 4. The diocese comprises the entire state of Texas.
1848 — Original structure of the cathedral is dedicated.
1876 — Galveston architect Nicholas Clayton adds transept tower to roof of the sanctuary.
1878 — A new bell and cast-iron ”Mary, Star of the Sea” statue is added to the bell tower.
1884 — Two front towers are heightened to bring them into proper proportion with the central tower.
1900 — The Great Storm ravages the Galveston coast.
1907 — Marking the 60th anniversary of Galveston Diocese and Cathedral, improvements are made. The sanctuary floor is refinished in mosaic tile. A new main altar of marble is erected. Stained glass windows installed. Cathedral exterior and the rectory are refinished in stucco.
1918 — Bishop Nicholas Gallagher‘s body is interred in the Cathedral floor by Marian altar.
1921 — Marble altar railing and steps installed, two marble side altars erected and interior is redecorated. Choir loft
organ equipped with 3,000 pipes fitted wall to wall.
1968 — St. Mary Cathedral is named a state historical landmark.
1973 — St. Mary Cathedral is named to the National Register of Historic Places.
1979 — St. John Paul II elevates the Cathedral to a “Minor Basilica,” an honor bestowed on select churches because of their antiquity or historical importance.
2008 — Hurricane Ike devastates Galveston-Houston in September, catastrophically damaging St. Mary with 8.5 feet of water.
2009 — Father Joseph Limanni tapped to oversee restoration effort.
2010 — Pews are rebuilt and refinished. Asbestos is removed on rectory and church. Roof on rectory and church is replaced.
2011 — Exterior masonry repairs, coating and chemical remediation is completed. Interior appointments, confessionals and Stations of the Cross are refinished. Two front spires reinforced with structural steel.
2012 — Column base reinforcement, floor replacement and truss reinforcement work and plaster repairs completed.
2014 — St. Mary rededicated and reopened 6 years after Ike on Easter Sunday
2015 — In December, Daniel Cardinal DiNardo opens “Holy Door of Mercy” at St. Mary for the Extraordinary Jubilee Year of Mercy
2017 — Father E.J. Stein and the Franciscan Friars of the Province of St. John the Baptist depart after serving Galveston for 35-plus years; Father Jude Ezuma is installed as pastor.
2019 — Restoration efforts begin to repair Mary, Star of the Sea statue and Cathedral Basilica structure and exterior