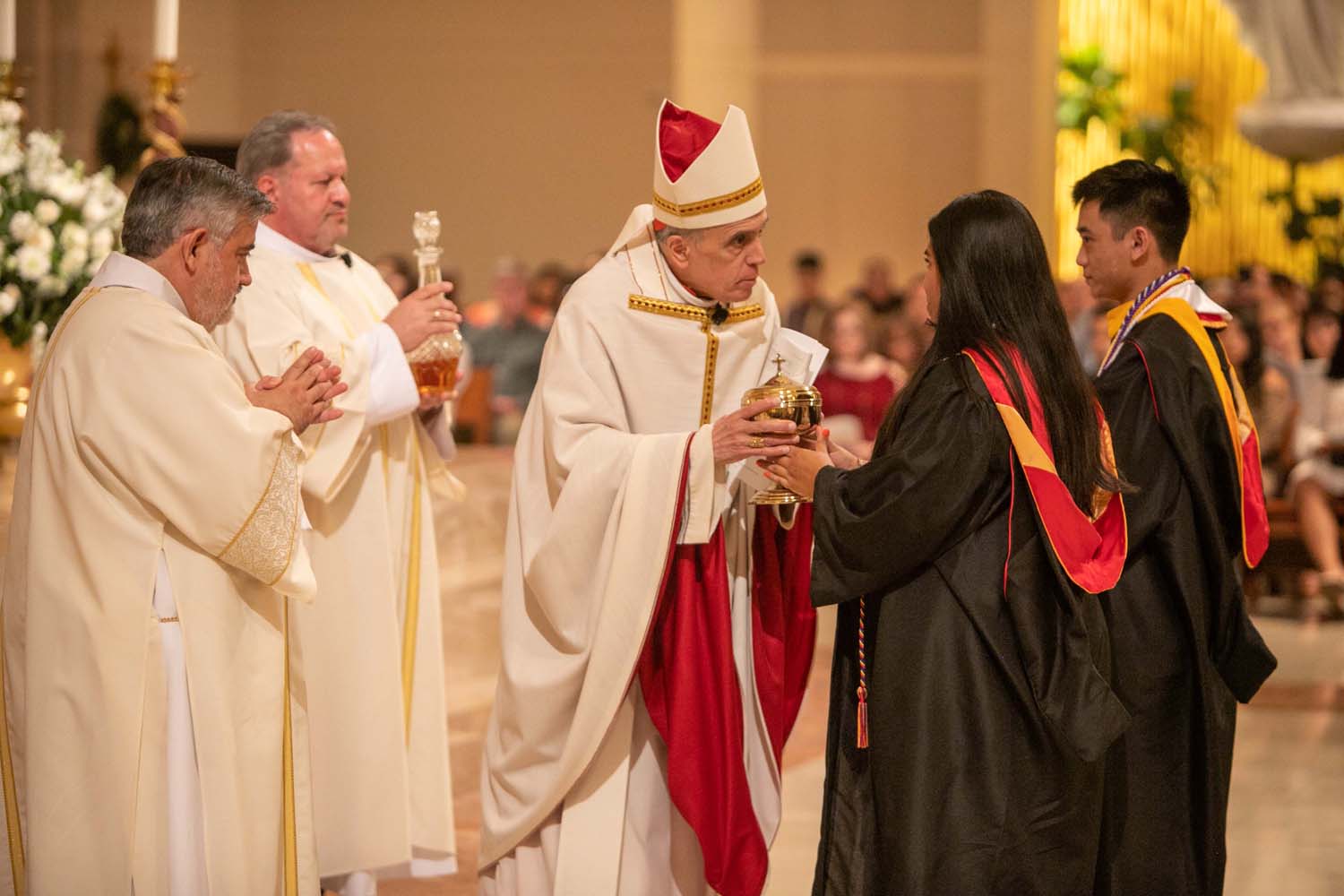 Above, Daniel Cardinal DiNardo accepts the offertory from graduating UST students, Cristhel Gutierrez and Christopher Trinh, at a baccalaureate Mass at the Co-Cathedral of the Sacred Heart on May 13. More than 970 students graduated from UST, which is marking its 75th anniversary. Below, Cardinal DiNardo, with UST President Richard Ludwick and Archbishop J. Michael Miller, attends the University of St. Thomas 75th Anniversary Gala “A Million Dreams” in Houston on May 7. (Photos by Dave Rossman and James Ramos/Herald)

HOUSTON — Hundreds of University of St. Thomas graduates celebrated the completion of their academic journey with prayer and reflection when Daniel Cardinal DiNardo celebrated the school’s annual baccalaureate Mass at the Co-Cathedral of the Sacred Heart in Houston on May 13.

Wearing flowing black graduation gowns adorned with special stoles and cords for achievements and honors, UST’s newest graduating class processed down the aisle of the Co-Cathedral. Cardinal DiNardo was joined by a number of concelebrating priests from UST’s clergy community.

UST President Richard Ludwick, who, in a brief address at the conclusion of the Mass, encouraged the students to “go out and change the world,” also attended with a contingent of the school’s faculty leadership.

In his homily, Cardinal DiNardo encouraged the students to “do good” and to “crease the world.” The students must “engage in action on behalf of human beings” and with UST’s Catholic identity in mind, to ultimately act for God, he said.

“I ask you graduates: make a beginning, I ask you to be grateful,” Cardinal DiNardo said. If you put two things like that together, you’d be surprised how, years from now, you will see the world changed because you made a beginning.”

Cardinal DiNardo also congratulated the many students, alongside their families and friends, for their landmark educational achievement.

Many wore mortar board caps that sparkled during the ceremony that featured Grammy Award-winning soprano Ana María Martínez as commencement speaker. The commencement student speaker was Michaella Maniscalo, and the university also honored Dr. Herbert P. Edmundson Jr. with an honorary doctorate.

A celebration to remember and honor a legacy of 75 years 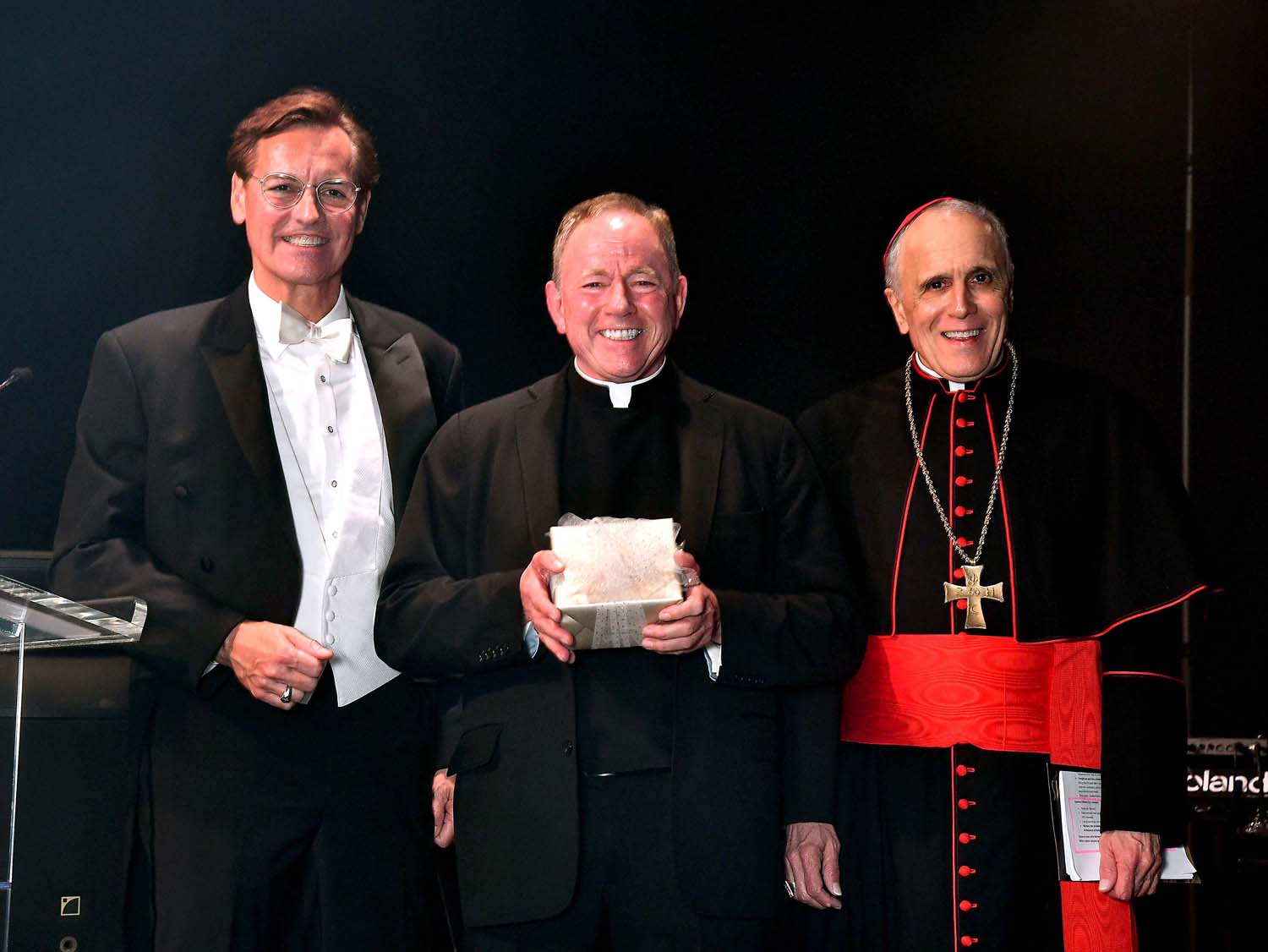 Cardinal DiNardo was also on hand to recognize Archbishop J. Michael Miller as UST’s 75th anniversary gala honoree on May 7 at the Hilton of the Hilton Americas Hotel in Houston. The event saw a record thousand attendees  who raised more than $2.4 million to benefit student scholarships and programs.

Cardinal DiNardo, who is on UST’s board of directors, joined UST President Richard Ludwick to recognize Archbishop Miller of Vancouver, Canada, for his leadership and service as UST’s seventh president. Archbishop Miller led UST through a capital campaign that completed the Academic Mall.

President Ludwick also recognized donors for their gifts of scholarships, which unlock the doors to transformational paths for students, he said. A paddles up appeal supported student scholarships and was matched by a $100,000 gift from the Hildebrand Foundation. The university marked its 75th anniversary with a series of events.