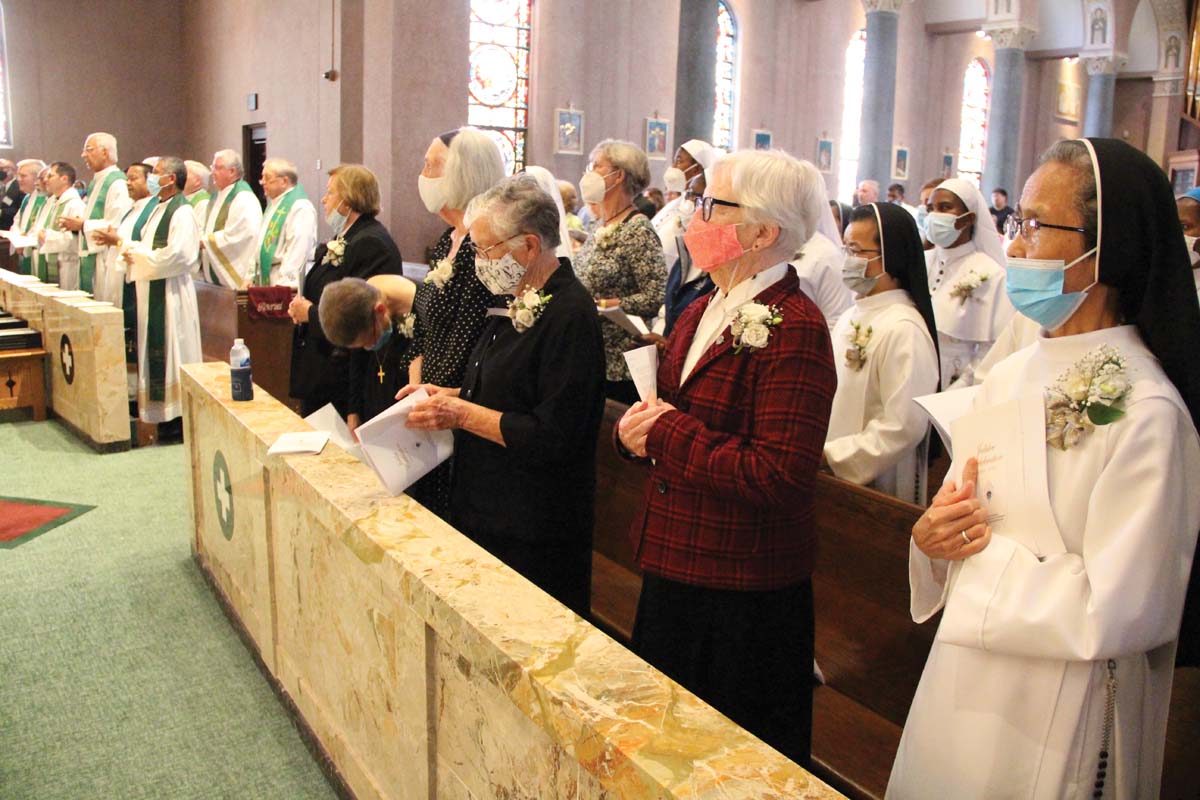 Daniel Cardinal DiNardo celebrated a Jubilee Mass Oct. 10 at St. Anne Catholic Church to celebrate the jubilees of more than 70 sisters and priests who reached milestone anniversaries during both 2020 and 2021. (Photo by Megan Doherty/For the Texas Catholic Herald)

HOUSTON — Dedicated religious sisters and priests come from all around the world, but many are right in the neighborhood celebrating years of service to God like Sister Mary Alice Carbajal, originally from El Paso and Sister Carmen Sanchez from San Antonio.

Now celebrating her 75th anniversary since taking her vows, Sister Mary Alice is 96 years old and retired living at St. Placidus, which is located on the Villa de Matel campus in Houston. But she remembers her years of teaching scores of students in schools in California, Guatemala and at the local St. Mary the Purification Catholic School.“I always wanted to be a sister since I was in second grade. I would tag along with my mother and aunts when they would help the Dominican sisters at church,” Carbajal said.

Sister Carmen Sanchez, celebrating her 50th anniversary, is now directing St. Martha’s Kitchen. Even during the COVID-19 pandemic, she and her staff fed more than 200 people a day with hot to-go meals from its pantry and kitchen off Navigation and Jensen Drive.

“About 65% are homeless, and the rest are poor families and elderly. Some even come in wheelchairs. But I receive as much from them in spirit as I give,” Sanchez said.

Because of COVID-19, this year was the first time in the past two years that Daniel Cardinal DiNardo celebrated a Jubilee Mass this Oct. 10 at St. Anne Catholic Church, along with retired Auxiliary Bishop George A. Sheltz, celebrating his own 50th anniversary, and more than 70 sisters and priests who reached milestone anniversaries during both 2020 and 2021.

The church put together a 51st anniversary video on its website showing photos of Monsignor from childhood through ordination in 1970, as a teacher and principal, to his current work in the parish.

Feeling God’s call since he was an altar server in sixth grade, Monsignor Young said, “First of all, I would do the same path. I would walk myself to church. I just felt God’s presence — there were no falling stars.”

Sister Francisca Faseemo, S.S.M.A., feels that same joy and celebrated her 25th anniversary last December by returning to her native Nigeria to share with family and friends.

“This has been a beautiful way to give my life to God and to serve others. I attended Catholic high school and this gave me the inspiration to share the joy of giving your life and being in union with God through prayer,” said Sister Francisca, who came to Houston in 2015.

Father Chacko Puthumayil, who recently retired as pastor of Queen of Peace Catholic Church in La Marque, is celebrating his 50th anniversary this year after being ordained Dec. 14, 1971, in India.

He started his priestly ministry in the Vijayawada Diocese and was also a teacher of spiritual theology in seminary before coming to Houston in 1997 and acting as parochial vicar at St. Laurence Catholic Church in Sugar Land.

“I helped serve in 27 to 30 different communities plus studied in Rome and traveled to the Holy Land,” Father Puthumayil. “I feel happy,” he said, en route to Chicago to visit family and then on to India.

Vicar for Religious Sister Francesca Kearns, CCVI, helping to organize the Jubilarian celebration and celebrating her own Diamond Jubilee after taking vows at Villa de Matel 60 years ago, said, “Jubilee time is… a time to ponder the mystery of how God has been present and guiding us all the way, even when we were unaware of his guidance. It’s a time of gratitude for the people we have served with and ministered to.”

She added, “It’s a time of humility to recognize how the people whom we served taught us so much and revealed to us the deeper meaning of our vocation and our next best step in ministry. Graced by a grateful pause, we are renewed to live the present with passion and to embrace the future with hope. As Cardinal DiNardo reminded us in his homily, our lives and communities have prepared us to enter fully into the Synod of 2023.”