By Lisa May, Texas Catholic Herald 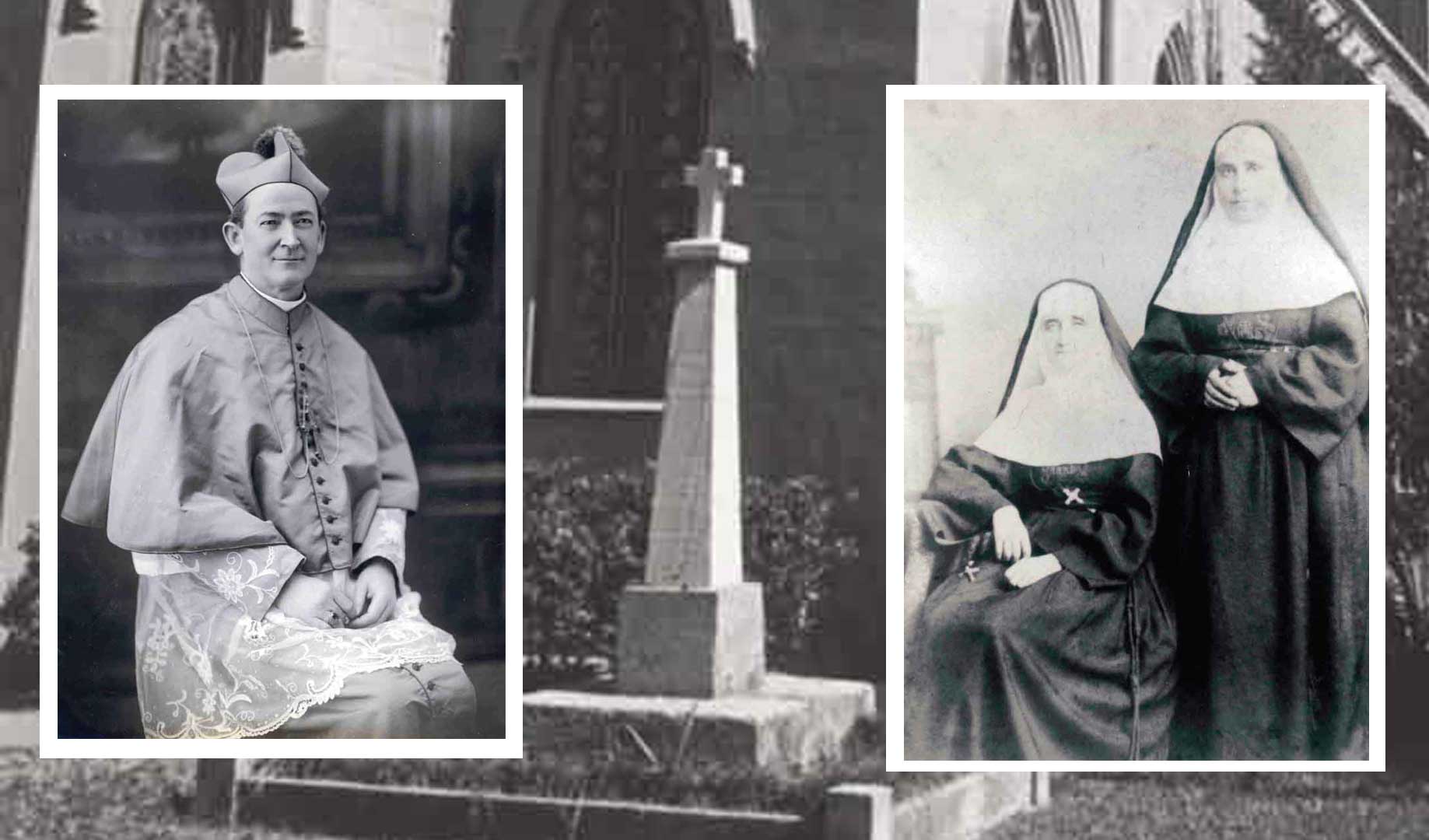 CENTER: A stone column, located to the right of St. Mary Cathedral Basilica’s front doors in Galveston, marks the burial site of six victims of one an epidemic in 1853. The diocese has suffered other epidemics in its history. AT RIGHT: The Sisters of Charity of the Incarnate Word, an order of nursing sisters, were founded in 1866. By February 1867, they had opened their first hospital in Galveston. AT LEFT: Father Christopher Byrne of St. Louis was named the fourth Bishop of Galveston in July 1918. His episcopal consecration was scaled down due to the flu epidemic that year. (Photos courtesy of the Office of  Archives and Records)

HOUSTON — Epidemics of deadly disease were a recurring threat to life in Texas for much of the 19th and early 20th centuries.

Port cities like Galveston were particularly vulnerable, as ships brought infection with their passengers and cargo. Yellow fever, the scourge of the summer and fall months, was spread by swarms of mosquitoes. The dreaded “yellow jack” hit Galveston hard between 1840 and 1870, killing hundreds of city residents in each outbreak.

To the right of the main doors of St. Mary Cathedral Basilica in Galveston, a stone column topped with a cross marks the burial site of six victims of one such epidemic in 1853.

Four were priests of the diocese, the fifth of the first Oblates of Mary Immaculate to serve in Texas. The final name honors a seminarian, Jean Pierre Bajard, recently arrived from France, who had been in Galveston only a few months when he succumbed to the disease.

Bishop Claude Dubuis, the second bishop of Galveston, founded the Sisters of Charity of the Incarnate Word in 1866, as an order of nursing sisters.

He wrote: “Our Lord Jesus Christ, suffering in the persons of a multitude of sick and infirm of every kind, seeks relief at your hands.” The first three sisters arrived in Galveston in October of that year.
By February 1867, they had opened their first hospital. That year yellow fever broke out in July. Two of the sisters fell ill, and on Aug. 18, Mother M. Blandine Mathelin, the superior of the small community, died, one of more than 1,100 lost in the city that year.

In the 20th century, the great Influenza Pandemic of 1918 to 1919 devastated millions around the world. In Texas, it also disrupted the life of the Church. Catholic schools were closed and, in some parts of the country, churches as well. The consecration of the newly appointed bishop of San Antonio, Bishop-elect Arthur Drossaerts, had to be postponed after he fell ill with influenza.

In Galveston, the see was vacant following the death of Bishop Nicholas Gallagher in January 1918. Father Christopher Byrne of St. Louis was named the fourth bishop of Galveston in July. However, his episcopal consecration in November that year, in the midst of the epidemic, had to be scaled back.

It was supposed to be closed to the public, in fact, but the Southern Messenger of San Antonio reported that “notwithstanding, a congregation of 600 was present.”

Lisa May is the director of Archives & Records for the Archdiocese.