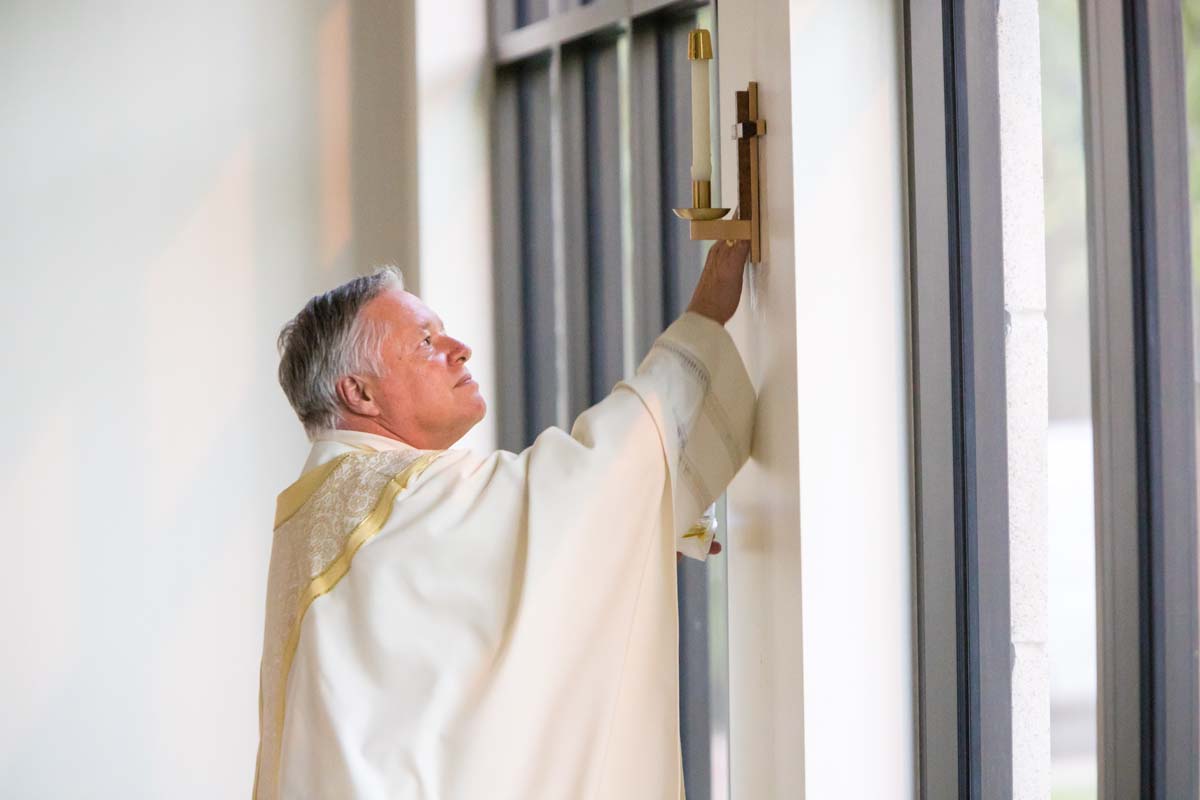 Father Norbert Maduzia, pastor of St. Ignatius of Loyola Catholic Church in Spring anoints the walls of the newly renovated church building during the parish’s rededication Mass on May 31. In the aftermath of Hurricane Harvey, Father Maduzia realized that “God was suffering along with those who had lost so much in the storm.” Photo by James Ramos/Herald.

Parishioners arrived hours before the rededication Mass at St. Ignatius of Loyola in Spring, joyful of finally being home in their church after being ousted for nine months by Hurricane Harvey's flooding and subsequent repairs.

"It's been tough. It really was a labor of love. This deepened my trust in God, the Good Shepherd, accompanying us," said Father Norbert Maduzia, St. Ignatius of Loyola pastor.

"God was suffering along with those who had lost so much in the storm."

In fact, finding Jesus missing an arm and hanging on the parish's processional crucifix floating face down in the floodwaters made Father Maduzia realize, "God was suffering along with those who had lost so much in the storm."

Jesus' arm was found floating in the church and a parishioner with restoration experience from the Smithsonian Institution repaired the processional crucifix. Held high, it led the procession and Daniel Cardinal DiNardo as they entered into the church for blessings, anointing and the May 31 rededication.

Cardinal DiNardo, who heads of the Archdiocese of Galveston-Houston, told the congregation: "We enter with gratitude."

Parishioners spent the past nine months worshipping in nearby school gyms, neighboring churches and a parking lot tent.

He told them, "Now you're no longer sojourners, but you're back home. I congratulate you for your patience and for some of your impatience and outbursts. People have suffered greatly in this area. But the church is built upon the rock of Peter."

As Cardinal DiNardo thanked Father Maduzia for all his work, the crowd of about 1,300 burst out in applause and gave their pastor a standing ovation.

The parish priest went viral online, streaming live on Facebook -- now viewed more than half a million times -- as he walked through the still-flooded church sanctuary with Father Khoi Le, parochial vicar. It was Father Le, who picked up the broken cross to save it from the floodwaters.

The northwest Houston community of Spring saw more than 16 inches of rain, pushing nearby Cypress Creek more than a record-breaking 15 feet past its banks for several days.

"I've prayed about that image and realized Christ was sharing in the passion of his people," Father Maduzia said in August. "He, too, was now homeless, off the cross, and broken as are many through these floods."

"He, too, was now homeless, off the cross, and broken as are many through these floods."

But the journey took its toll and the previously 4,000 family members dwindled to about 800-strong.

Cardinal DiNardo took note, "Some have wandered away, but welcome them back as with the prodigal son. It's truly amazing that this was all done in nine months."

Parishioners for 15 years at St. Ignatius, Beatrice and Domingo Marquez, married 66 years and parents of seven children, hung in there throughout the ordeal. The parish met for Mass at nearby high schools, community centers, and eventually in a tent in the parish parking lot.

"We passed the test," Domingo said. "What a blessing to be back!"

Beatrice said, "We were very sad when all that happened. But they worked very hard and everything looks brand new."

That afternoon of the rededication, a special delivery arrived -- a glistening gold-colored statue of Our Lady of Prompt Succor, the Madonna who holds the baby Jesus and is protector against hurricanes.

Another new addition, each corner of the altar is held up by angels holding Communion and chalices. Cardinal DiNardo, describing how he would generously anoint the altar, said, we "pour chrism like it's the mega-Confirmation of the year."

Although contractors are finished with mucking out the buildings, ripping through Sheetrock and tossing out waterlogged furniture and sheet music, three of the buildings remain under repair, including the church hall.

A large white tent remaining on the 14-acre St. Ignatius campus doubled as the hall for the reception held after the rededication. Homes throughout nearby neighborhoods are still in reconstruction mode.

Cardinal DiNardo said, "I know you've been through grief and anger, but now we're all rejoicing."