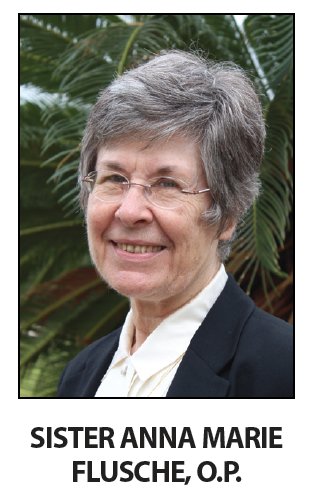 HOUSTON -Sister Anna Marie Flusche, O.P., a member of the Dominican Sisters of Houston drew an inquisitive crowd at St. Justin Martyr Church on Nov. 19 during her presentation titled "Dominic's Circle of Friends" — a celebration of the 800th anniversary of the institution of the Order of Preachers, which was on Dec. 22, 1216.

With wit and precision, Sister Flusche delivered a PowerPoint presentation about the life and times of Domingo De Guzman (St. Dominic). Domingo was a native of Castile in what is now Spain. The lecture included material about Domingo's friends, including the nine women who first followed him and the 16 men ("his boys") whom he dispersed to spread the Gospel to the whole world.

Particular attention was paid to their efforts with the Cathars, also known as Albigensians.

In a question and answer session following the lecture, Sister Flusche fielded a variety of inquiries about the logo of the Dominican anniversary celebration, the relationship between the Franciscan and Dominican reforms and various symbols in use in Dominican publications.

In honor of Domingo's Spanish heritage, the evening's refreshments included several kinds of "tapas," tasty tidbits typical of Spanish inns and cafes both ancient and modern.

During an interview with the Texas Catholic Herald, Sister Flusche explained that her original intent was to create a screenplay about St. Dominic "and friends." The treatment ultimately transformed into the presentation, allowing participants to see St. Dominic as "a living, breathing person rather than just a plastic figure or statue" by exploring the roles his friends and acquaintances played during his life.

"There is also something to be said about seeing and relating to St. Dominic through his friends, through a modern lens," Sister Flusche said. "I do as much as I can to introduce others to St. Dominic through his friends, making him ‘as alive' as possible for those attending the presentation."
A born researcher, Sister Flusche spent a year studying in Toulouse, France. While there she gained an intimate knowledge of the city where Dominic laid the foundation of his Order.

Sister Flusche is a member of the Dominican Sisters of Houston, Texas. She is the author of several articles and presentations regarding religious who were organbuilders, including Joseph Cavaille, the Dominican who founded a prestigious dynasty of French organbuilders.

In 2005, she published the book The Life and Legend of Gerbert of Aurillac: The Organbuilder Who Became Pope Sylvester II (Edwin Mellen Press).
More information about Sister Flusche's presentation is available at dominicsfriends.weebly.com.