Milestones: Sister Cruzat, Magie recognized for leadership in the Church 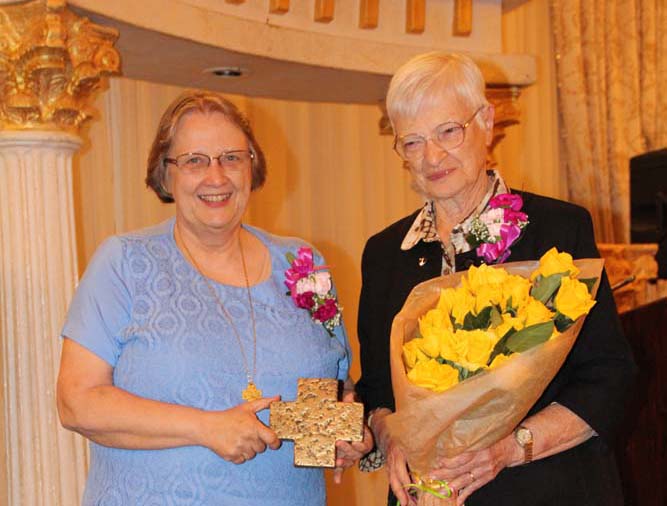 Sister Mary Ann Peters, rc, LEFT, Ministry Director for the Houston Cenacle Retreat House, is pictured with Sister Heloise Cruzat, O.P., the honoree of the 2018 Cenacle Spring Dinner, April 11 . Sister Cruzat has served the Archdiocese of Galveston-Houston as Vicar for Religious for 13 years. Sister Peters received her high school diploma from Sister Cruzat 43 years ago when she graduated from St. Agnes. “You have been a witness for us over the years,” Sister Peters said of Sister Cruzat. “A witness to the Gospel, a light for education and a servant for those who need lifting up.” Photo by Jonah Dycus/Herald.

The Cenacle Sisters were displaced by Hurricane Harvey, which destroyed their residence and retreat center facility in west Houston. They are currently based at the Memorial Lutheran Church campus.

Among those present at the spring gala were Daniel Cardinal DiNardo, Archbishop Emertus Joseph A. Fiorenza, Auxiliary Bishop George A. Sheltz, as well as numerous priests, religious and supporters of the Cenacle Sisters and Sister Cruzat.

During his comments to close the evening, Cardinal DiNardo credits “Dominican providence” for Sister Cruzat’s work in the Archdiocese, and her ability to work with the various religious communities with both “compassion and understanding.”

“She really just loves the Archdiocese of Galveston-Houston,” Cardinal DiNardo said. “She knows of where we’ve been, and she’s a very good synthesizer of what is happening.”

Sister Cruzat, a native Houstonian, is a member of the Dominican Sisters of Houston. She attended All Saints Catholic School and St. Agnes Academy. During her ministry in the local Church, she served St. Agnes Academy and St. Pius X High School as principal.

“Sister Heloise Cruzat has devoted her religious life to the spiritual growth and formation of teenagers, faculty and staff, Dominican sisters and religious women of the Archdiocese of Galveston-Houston,” Sister Pollard said. “As a true preacher, she is not afraid to speak against injustices and to stand firmly in her personal and Dominican convictions. Whether explaining a declension in Latin, conjugating a verb in Espanol or Francais, she is blessed with the gift of language. As evidenced by Heloise’s own words, I think she says it best: ‘Although I have always lived in community, my belief is that my witness has been to the importance of Catholic education and in these later years, to the service of the local Church.’”

After receiving her recognition at the dinner, Sister Cruzat turned her attention to the event hosts and her frequent collaborator, the Cenacle Sisters. She described them as “women of strong faith, even in the midst of gut-wrenching challenges, both communal and personal; women who treasure their ministry as opportunities to form lasting relationships and as opportunities to empower others to give their gifts to each other.”

The Cenacle Sisters’ presence and programs “have nourished my soul and body, too, for more years than I know how to count,” Sister Cruzat added. “I have come to know them personally, to call upon their many talents and to treasure their friendship.”

Sister Cruzat entered the Dominican Sisters of Houston in September 1951. She holds a BA from Dominican College and an MA from St. Louis University.

HOUSTON — Sandra Magie, Ph.D., dean of the University of St. Thomas (UST) School of Theology at St. Mary’s Seminary, was honored as one of “Houston’s 50 Most Influential Women” by Houston Woman Magazine at an event Feb. 11.

Appointed by then-UST President Father J. Michael Miller, CSB, in 2003, Magie is one of the first women to serve as an academic dean of a Roman Catholic seminary and has been a faculty member since 1990.

During her time as dean, the theology school has continued its primary mission of training men preparing for ordination to the Catholic priesthood and diaconate, as well as providing a theological education for individuals —both men and women— who serve as pastoral leaders in ministries ranging from hospital chaplaincy to ministry to the poor and disadvantaged. Many members of the permanent diaconate attend classes at the seminary.

The women selected as Houston’s 50 most influential women of 2017 “are individuals with vast networks of social and professional connections. They have earned an enviable reputation for their expertise in a particular field or arena. They are knowledgeable, credible and worthy of trust and admiration. The thoughts and actions of these women influence the thoughts and actions of others. It is our distinct pleasure to introduce these remarkable women to our readers and to others in our community.”

Magie said, “It is an honor, but I give credit to my faculty and staff. I also credit Cardinal DiNardo for all his support to the university.”

She earned several science degrees, including a Ph.D. in Molecular Biology with a minor in Biochemistry from Texas Woman’s University before moving to St. Louis where she completed postdoctoral work at St. Louis University Medical School. Magie then joined the Department of Pathology at Southwestern Medical School in Dallas.

During this time, Magie became interested in the medical bioethical questions. The bishop of Dallas sponsored Magie for study at the Academia Alphonsiana in Rome. While there Magie completed both the Licentiate in Sacred Theology (STL) and Doctorate in Sacred Theology (STD). Because of her educational background and experience Dr. Magie currently advises on questions of biomedical ethics.