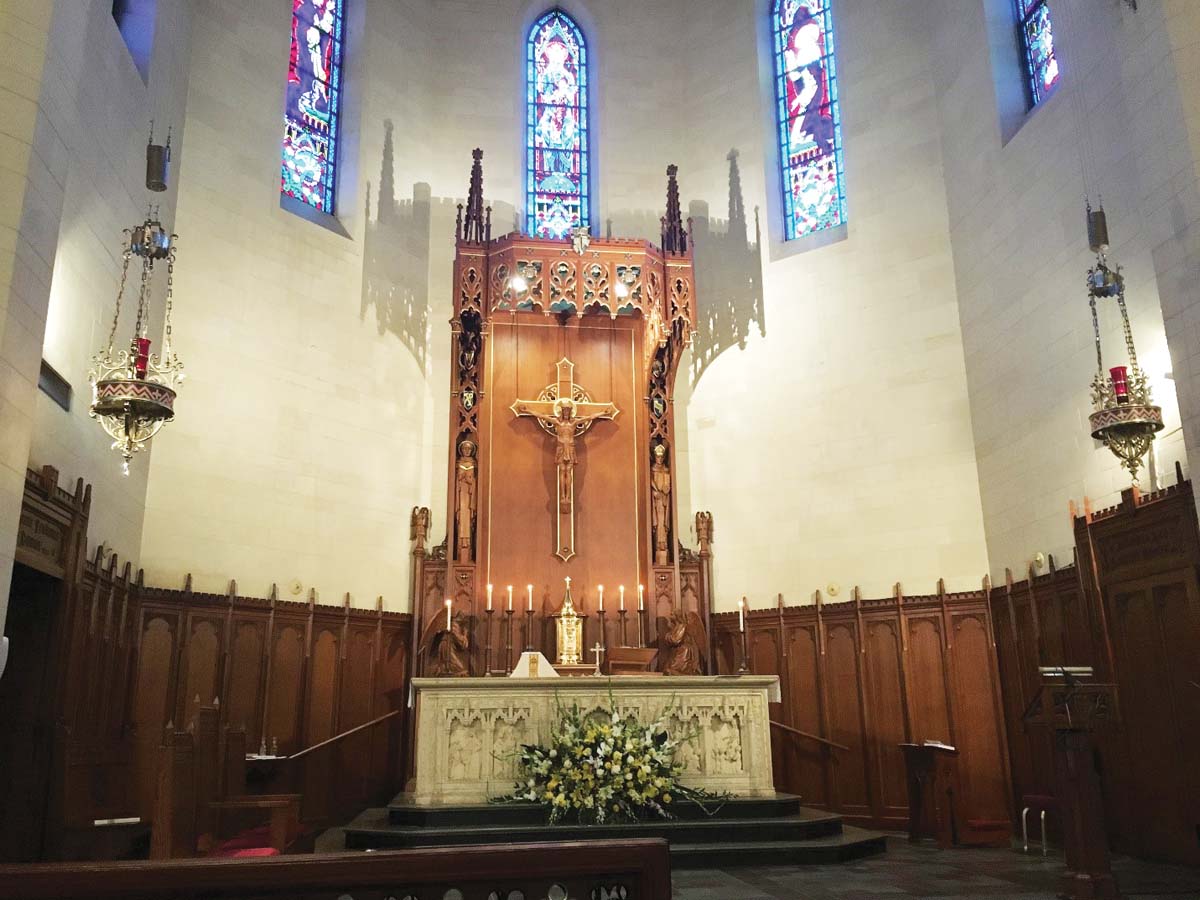 HOUSTON — Holy Rosary parish in Houston’s Midtown district has undertaken restoration projects due to recent patrons donating money for the cause. The focus of attention has been on the church’s sanctuary.
The church was founded by the Dominican Friars in 1913, back when Houston had a population of 82,000. After purchasing land, a parishioner, who was also an architect, designed the Gothic-style building. It was dedicated on Nov. 15, 1933, by Bishop Christopher Byrne of Galveston.
The Gothic style is visible in the sanctuary as the large arch that frames the sanctuary comes to a point at the top. The crucifix hangs within the baldachin, and each features gilded appointments. The “ceiling” of the baldachin has an icon of the Holy Spirit surrounded by a sunburst pattern, much like Bernini’s baldachin in St. Peter’s Basilica.
To the left and right of the crucifix, integrated into the reredos, the large wooden backing on the wall behind the altar, is St. Thomas Aquinas, O.P., and St. Albert the Great, O.P.
Above the baldachin are stained glass windows of St. Dominic and St. Catherine of Sienna to the left and right of St Mary. This repeats the same theme in the tympanum above the doors entering the church with Mary depicted as giving the Rosary to both saints.
In front of the baldachin stands the altar, which was sculpted from limestone by Oswald Lassig, who also sculpted for Rice University.
Five scenes are carved on the front: the Annunciation, Presentation, Nativity, Resurrection and Ascension. Each one is at eye level for meditation of the Incarnation when kneeling at the altar rail.
The parish has a newly installed pastor, Father Peter Damian Marie Harris, O.P., who believes the parish is well-positioned for growth.
Holy Rosary will “continue to be a sanctuary, a grace and mercy for many in the mid-town area,” Father Harris said. 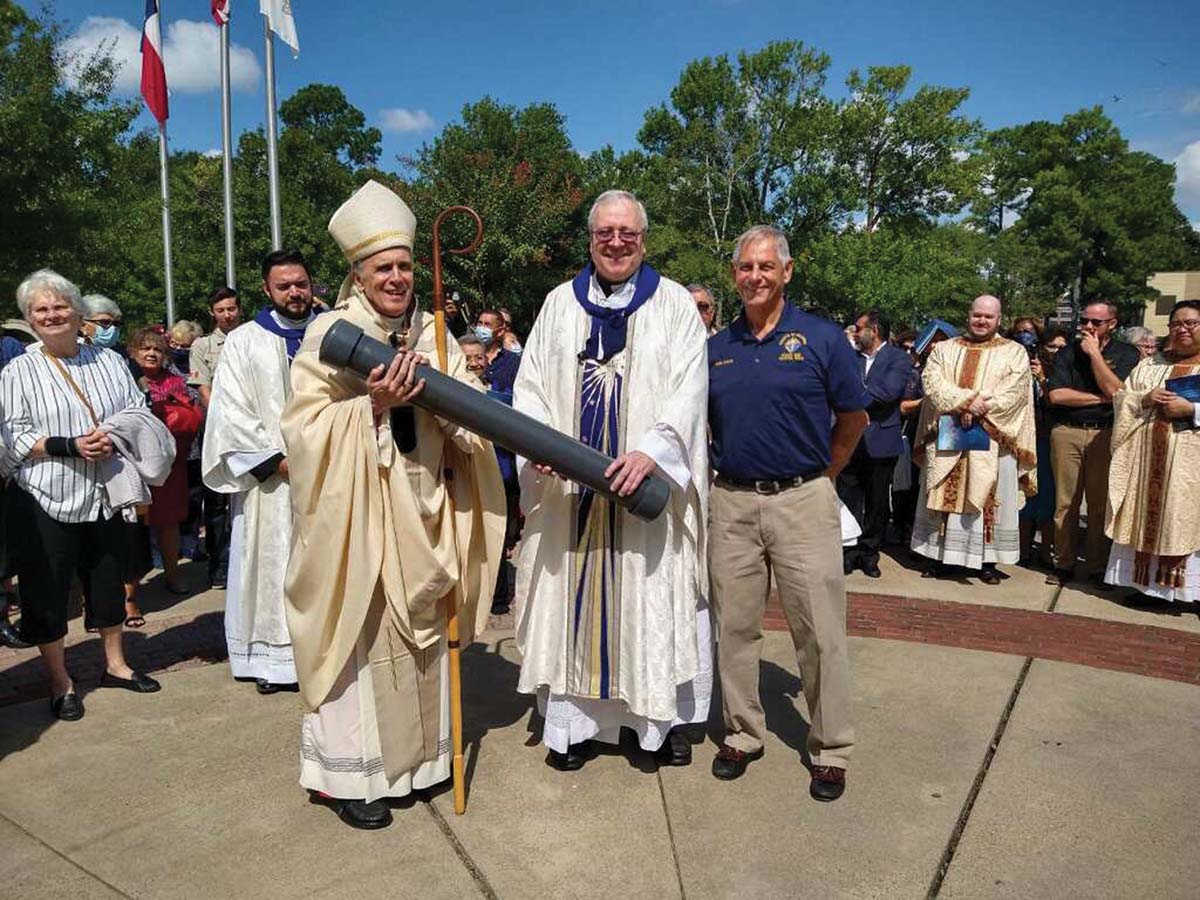 HOUSTON — Clergy, staff, parishioners and friends of Prince of Peace Catholic Community (POP) in northwest Houston gathered together on Sept. 18 to celebrate the parish’s 50th anniversary.
The morning Mass was con-celebrated by Daniel Cardinal DiNardo, church Pastor Tom Ponzini, and parochial vicars Father Antonio Ortiz and Father Santy Kurian. The Mass was followed by a festive celebration in the discipleship center that included the removal of a time capsule buried 25 years ago in 1996.
Within the time capsule, each of the contents were carefully secured in plastic zip-lock bags.
The contents included a program of the dedication of the then-new church in 1994; an edition of the Texas Catholic Herald with an article about the 25th anniversary of the parish; editions of the Prince of Peace newsletter (“Bits and Peaces”), names of parish staff, volunteer leaders and members. The capsule also contained a T-shirt from a parish youth retreat signed by the retreatants. The capsule featured responses from ninth grade religious education students who shared how they thought Mass might change in 2021.
Some responses said: there might be robot or holographic priests; the music will be more modern, with televisions in every pew because the church would be so big and not everyone can see the priest on the altar; that Mass would be given through computers and use laser technology to make it more of a show; and perhaps fitting for 2020: “Technology will affect the church by making it so people can go to church by watching T.V.”
POP became an official parish of the Archdiocese of Galveston-Houston in 1971. It came from humble beginnings with Mass, Sacraments, and faith formation classes held at a small apartment complex on FM 1960, then moved to nearby Matzke and Bleyl elementary schools. Today, the Catholic faith community has more than 9,500 households and continues to grow each year.
Father Ponzini received his first priestly assignment at POP when the parish was celebrating its 25th anniversary. He said he is doubly blessed to celebrate its 50th anniversary this year as pastor.
“To play a small part in the history and evolution of this vibrant parish is more than mere words can describe,” said Father Ponzini. “May our loving God continue to transform many minds and hearts in the years to come.”