Michelangelo's Sistine wonders, others on view at MFAH 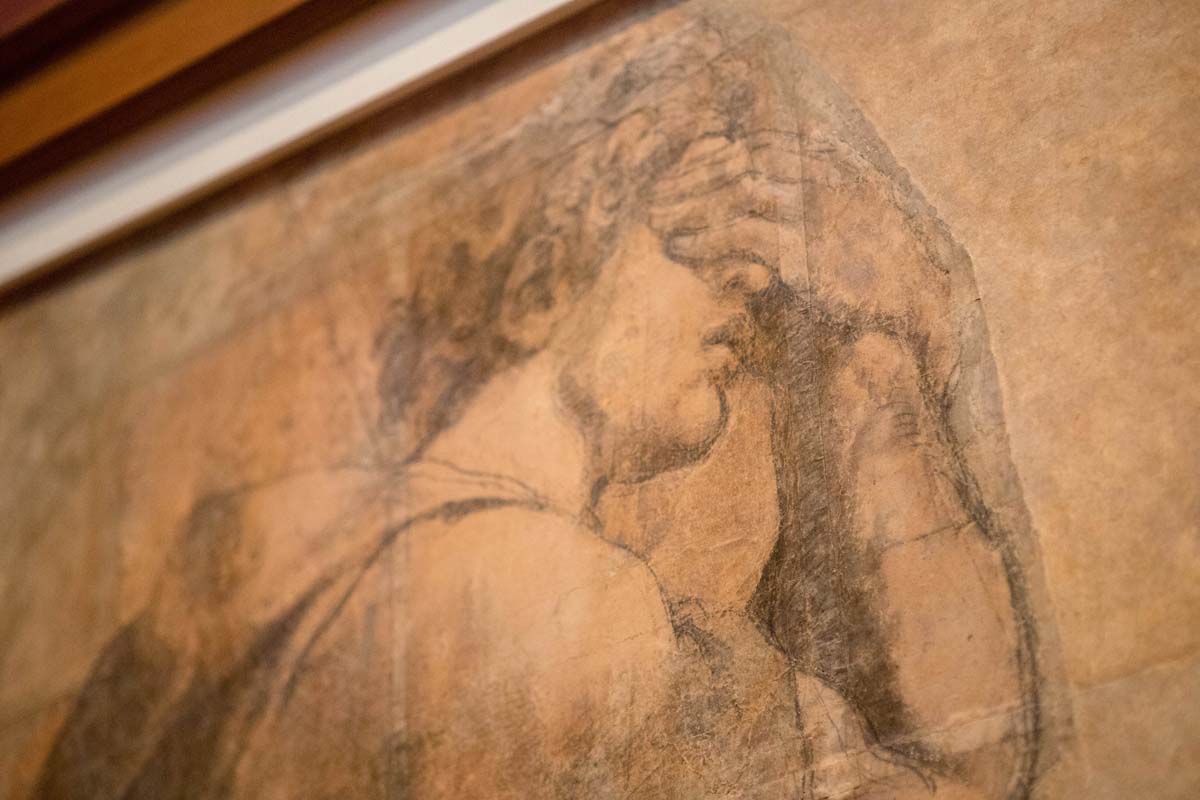 A charcoal cartoon, or sketch, of ‘Moses before the Burning Bush’ for a vault ceiling in the Vatican by Raphael from 1514 is on display at the Museum of Fine Arts, Houston as part of the Michelangelo and the Vatican exhibition. Photo by James Ramos/Herald.

HOUSTON — Sometimes massive art displays like Michelangelo’s Sistine Chapel is best seen through a mirror. That way, viewers can survey the intricate art by simply gazing down for a closer look and not straining to look up in discomfort.

And sometimes art is even better to view when it’s in the backyard.

For the first time ever, a scaled replica of Michelangelo’s Sistine Chapel ceiling is on view at the Museum of Fine Arts, Houston (MFAH). Starting this month, Catholic faithful and anyone with an interest in art can view centuries-old masterworks by Michelangelo and his peers that highlight the artistic legacy of Pope Paul III and the vital role that drawing played in art production throughout Europe in the late 15th and 16th centuries.

The “Michelangelo and the Vatican: Masterworks from the Museo e Real Bosco di Capodimonte, Naples,” open now through June 10, features drawings, cartoons, paintings, sculpture and prints by Renaissance master Michelangelo and his predecessors and successors, including Raphael, Rubens, Tintoretto and Titian.

With much of the collection from the Capodimonte Museum in Naples, Italy, the exhibition presents some 40 works from the 16th century, many commissioned or completed during the papacy of Alessandro Cardinal Farnese, also known as Pope Paul III. Known for his strong patronage of the arts, and of Michelangelo (1475–1564) in particular, Pope Paul III oversaw the completion of Michelangelo’s epic fresco The Last Judgment on the altar wall of the Sistine Chapel. The Houston exhibition features a unique, six-foot large-scale copy of The Last Judgment painted in oil by Marcello Venusti from 1549.

The scaled replica of the Michelangelo’s Sistine Chapel ceiling, floating high in the lofts of the MFAH’s Audrey Jones Beck Building (5601 Main St., Houston), offers visitors a chance to see a version of the renowned painting in Houston. Two mirrored tables offer a unique —and more comfortable— perspective of Michelangelo’s ceiling that features the renown ‘The Creation of Man’ and other biblical figures.

Centered directly below the photographic reproduction is an original wooden model of the St. Peter’s Basilica dome carved by Michelangelo himself with the carpenters of the Fabbrica di San Pietro.

The exhibit also features one of Michelangelo’s finest monumental drawings: an 8.5-foot cartoon that depicts Roman soldiers is a fragment of the ‘Crucifixion of St. Peter,’ seen in a large-scale reproduction adjacent to the sketch, the 20.5-foot original found in the Vatican’s Pauline Chapel, a sacred space not typically open to tourists in Italy. Both the Sistine Chapel and the Pauline Chapel are used as the venues for the papal conclave, the last in 2013 that saw the election of Pope Francis.

Two iconic portraits of Pope Paul III by Italy’s greatest Renaissance masters: Raphael and Titian are highlights as well. Floor to ceiling reproductions highlight maps and diagrams detailing the architectural plans for St. Peter’s Basilica, including the Portico and the Square.

While much smaller, papal fans will find intricate engravings depicting the Basilica and Bernini’s Colonnade, vaulted scaffolding of St. Peter’s, as well as an etching of a papal benediction with a newer Basilica rising in the background. The oldest artwork, a drawing by Fra Bartolomeo from 1499, depicts the Prophet Elijah reading.

Figure studies and compositional drawings alike, from Raphael’s exquisite preparatory cartoon for Moses before the Burning Bush (c. 1514), a fresco painted on the ceiling of Pope Julius II’s private audience chamber in the Vatican, to Tintoretto’s Study for the Battle of the River Taro (1578–79) rendered in chalk and tempera, demonstrate how the greatest artists of the Renaissance used drawing to conceive and complete their monumental compositions.

These works from the Vatican, New York’s Metropolitan Museum of Art, the University of Chicago Library, private collectors and the MFAH’s own collections all round out the loans from the Capodimonte Museum.

For more information, including tickets and hours, visit www.mfah.org. †