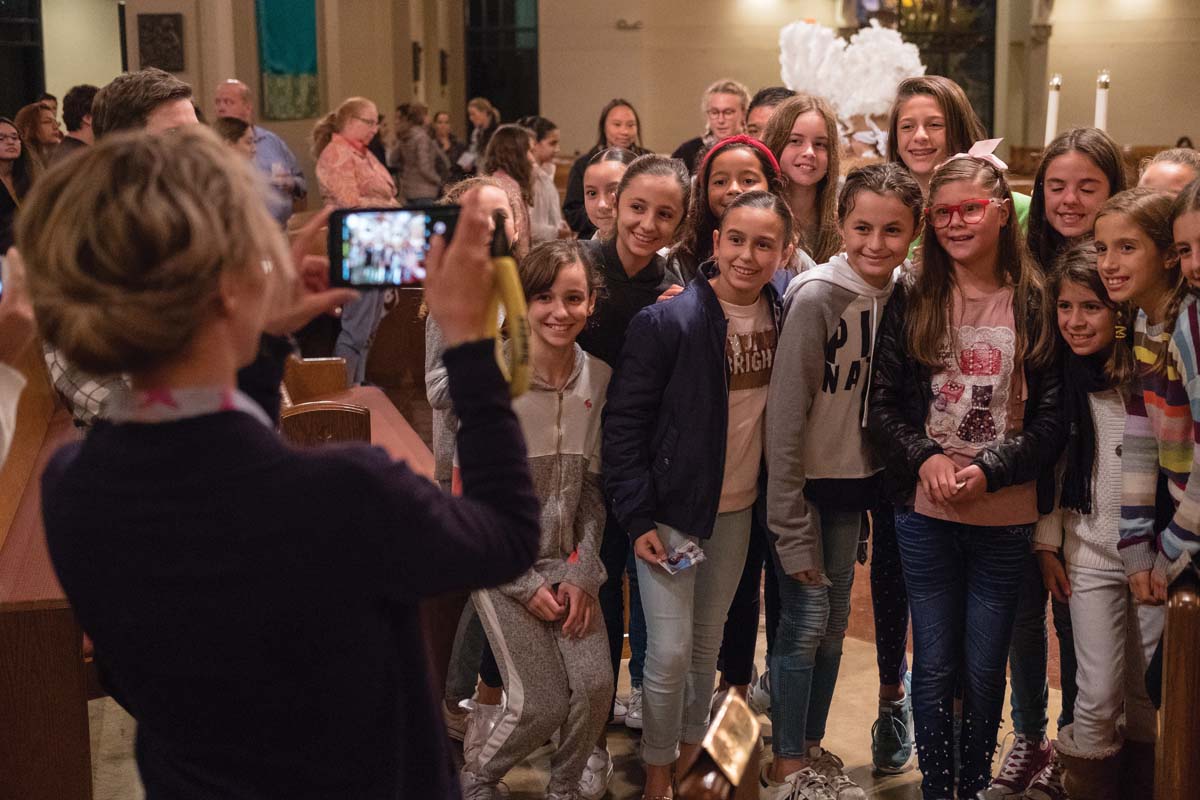 Paulina Gálvez Ávila, at left, takes a photo of her daughter Ximena Gálvez, at right in glasses, and more than a dozen others after they venerated the relic of St. Jose Sanchez del Rio, a 14-year-old Mexican boy martyred for refusing to renounce his faith during the Cristero War in Mexico of the 1920s. His relic toured several parishes, along with Paulina and Ximena Gálvez who experienced a miracle from St. Jose’s intercession, and a group of teens traveling with St. Jose’s relic to share his story. Photo by James Ramos/Herald.

THE WOODLANDS — Ximena Gálvez shyly giggled when a massive group of young girls crowded around her for a group picture. Beaming, she adjusted her glasses as her mom Paulina Gálvez Ávila snapped the photo.

The young 10-year-old then turned around and was quickly embraced by each of the girls, a few teary-eyed. They talked quietly to her in her native Spanish as Ximena handed them prayer cards bearing an image of her greeting Pope Francis in 2016.

Paulina gently encouraged the shy Ximena to keep talking to the other young girls while the mother greeted others, after all her story is a miracle.

A first-class relic, a fragment of St. José’s rib bone, visited five parishes and a Catholic school in the Archdiocese Oct. 14 to 21. St. José was a 14-year-old Mexican boy martyred for refusing to renounce his faith during the Cristero wars of the 1920s, a rebellion against anti-Catholic, secularist policies of a Mexican government that persecuted the Catholic Church.

During this tour, Paulina and Ximena traveled alongside the saint’s relic to share their story of Ximena’s miraculous healing from St. José’s intercession. Parishioners and visitors could venerate the relics as well.

A troop of young Mexican Catholics also toured with the family, sharing St. José’s story of staunch faith in times of persecution. At St. Anthony of Padua Catholic Church in The Woodlands, after indigenous Mexican dancers processed into the church, the mother and daughter carried the saint’s relic and then shared their story, two years to the day St. José was canonized by Pope Francis on Oct. 16, 2016, alongside six other saints.

When Paulina learned she was pregnant with Ximena in 2008, doctors had a grim congenital prognosis: Ximena would have Down syndrome and they recommended Paulina have an abortion.

Paulina disagreed and carried Ximena to 38 weeks of pregnancy, when Paulina had her daughter by cesarean section.

In the coming weeks and months, Ximena’s life would hang in the balance. The newborn contracted pneumonia and tuberculosis. She survived a dangerous operation that removed half of a lung, a procedure that carried a narrow 30 percent survival rate, as well as meningitis and a stroke.

Three days after the MRI, Paulina still didn’t lose hope, telling the doctors that she believed in God and that her daughter was alive.

Still, despite the mother’s seemingly fruitless hope, Ximena was removed from life support. As they disconnected her, Paulina held her child and prayed for Ximena, placing her daughter into God’s hands and asking Blessed José to pray for her daughter.

Suddenly Ximena opened her eyes, smiled and laughed, to everyone’s shock, except for Paulina. The doctors quickly did tests, and soon Ximena would recover 100 percent of her brain activity.

Eventually released from the hospital, the family returned home and were quickly visited by several priests who had heard the story of Ximena’s miraculous healing.

Paulina said, despite everything — including an aneurysm, the tuberculosis, meningitis, seizures and losing half a lung — Ximena had one more test to pass: the approval of the miracle by Church authorities.

The priest responsible for processing any miracles attributed had serious doubts Ximena was truly healed due to Blessed José’s intercession, Paulina said. He had seen 36 attempts before, and “this would be the 37th,” he said.

It took two rounds of testing for him to accept the results that she had truly been healed, and with tears in his own eyes, he realized Ximena’s story was the one that would bring José to the altar for canonization. José, often affectionately called Josélito for being a young boy, had already been declared venerable by St. Pope John Paul II in 2004 and beatified by Pope Emeritus Benedict XVI in 2005, but would then be canonized after Ximena’s miracle was authenticated.

Little Ximena greeted Pope Francis when he visited Morelia, Michoacán in Mexico in 2016, where he urged clergy to stand strong against corruption and drug-influenced violence. She would greet him again in St. Peter’s Square during St. José’s canonization Mass in October later that year.

His canonization banner shows the young saint dressed in blue jeans and a white shirt, holding a Rosary and a palm branch, symbols of his unshakable faith and martyrdom. A trail of blood is seen at his feet along with a single bullet, symbolic of the torture and the manner of death he endured at the hands of his captors.

St. José’s story has inspired countless young people, including eight teens, 16 to 20 years old, known as Adolescentes por México or Teens for Mexico, who traveled with the saint’s relics sharing the Mexican saint’s story of faith and courage in the face of persecution.

“St. José asks something unique from each of us,” Carolina Castorena said. He is “calling us to be saints.”

Martha Salas, coordinator of Spanish Faith Formation at St. Anthony of Padua, said the parish invited the relics of St. José because “he’s a very good example for the youth to follow in a strong testimony of life, courage and a great love for our God and for Jesus.”

“We think that it’s very important for the people to realize how a little boy was able to do something like that and we are able to do something greater,” she said. She described modern society as a “time of persecution,” not necessarily like in Del Rio’s wartime, but as an “ideological persecution. We have a lot of difficulties in these times so I think having him here [was] inspiring people to follow his example.”

She encouraged young people to learn from St. José’s story because he was also their age, and that they can see a young person like them “strive” and be a good example of being “faithful and steady in difficulties.”

“That quote is like to say I have that hope to be with [Christ] some day and ... He is the king of everything but His kingdom will reign here in earth as well as in heaven.”

St. José was the boy who died for love of Christ the King.

Born on March 28, 1913 in Sahuayo, Michoacán de Ocampo, Mexico, at age 13 St. José became a flag-bearer in the Cristero army who were fighting to remain Catholic in the face of anti-religious government decrees.

Captured by government troops, he was imprisoned, abused and ordered to renounce Christianity; José refused. The soldiers used machetes and bayonets on him, and finally shot him. He then became a martyr for his Catholic faith on Feb. 10, 1928 in his own hometown.

The chapel at Camp Kappe in Plantersville, the youth retreat facility of the Archdiocese of Galveston-Houston, will be named for St. José. The Chapel of José Sanchez del Rio is currently under construction. This will be the first church or chapel dedicated to the Mexican saint, according to Archdiocesan officials.