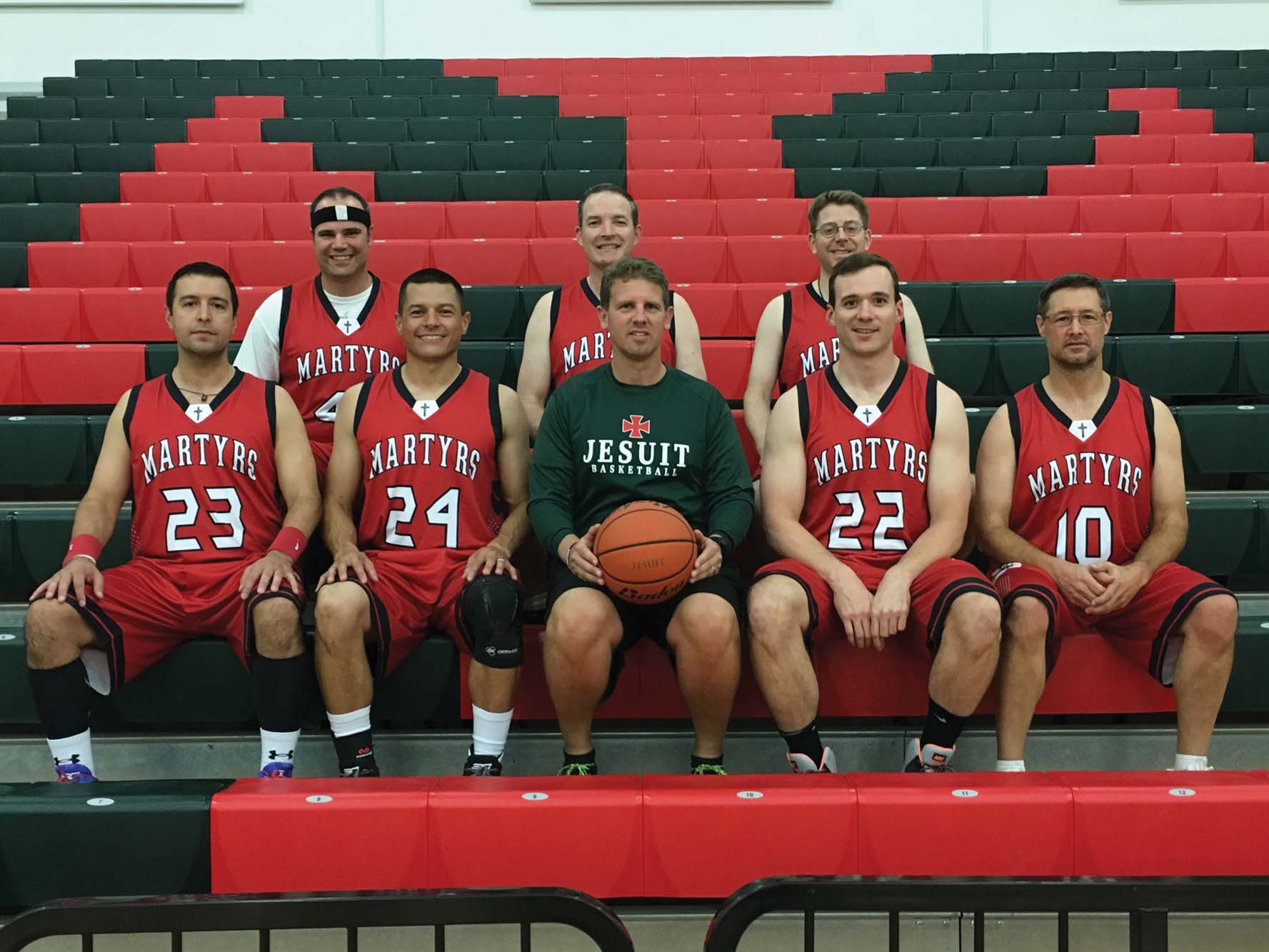 HOUSTON — The college basketball national championship is over and the National Basketball Association (NBA) playoffs are around the corner. But in April for the Archdiocese of Galveston-Houston, it is time for the anticipation to build for surely the most exciting competition of 2017.

The Inaugural Priests versus Seminarians Basketball Game will hit the floor at 7:15 p.m. on Friday, April 21 in the Strake Jesuit Competition Gym, 8900 Bellaire Blvd. Attendees will be eager when the doors open at 6 p.m. It is sure to be an exhilarating night when community, fellowship and competition take center court.

Father Preston Quintela, parochial vicar at St. Elizabeth Ann Seton Catholic Church in Northwest Houston, said the non-stop action of basketball was a good choice to provide a very exciting environment for the players and the crowd.

“This event would not have been possible without God’s hand carving out every detail,” he said. “The idea first came up in the spring of 2016, after a basketball tournament against Holy Trinity Seminary (Dallas). A few seminarians and I were discussing how to continue the excitement outside the walls of St. Mary’s Seminary. We wanted to bring this comradery and fellowship to families allowing them to witness the vocation and consecrated life on a bigger scale.”

On one side of the ball will be the priests with the team name of Martyrs. The team will include several local priests and a few from other dioceses. On the other side of the ball is the team from St. Mary’s Seminary, which will be comprised of seminarians from Galveston-Houston and the Dioceses of Brownsville, Austin and Dallas to name a few.

Father T.J. Dolce, vocations director for the Archdiocese of Galveston-Houston, said even though it was tough getting priests together for practice at the same time, the Martyrs team has a balanced game plan.

“We have several guys that can play on both ends of the floor,” he said. “We have size, shooters, ball handlers, rebounders and tough defenders.”

For most of the players, basketball was an easy choice for a sporting event like this. “Basketball is the greatest game in the world,” Father Dolce said. “It is also much easier to find just five guys at a time to play and being indoors is a great advantage. We won’t have to worry about weather delays or any adverse conditions.”

Father Dolce, a huge sports fan, said that basketball is his favorite sport.

“Most people that have heard me preach probably could tell you their favorite sports-themed homily,” he said. “My favorite sport is basketball; I’ve played it nearly all my life. When I was in high school, I liked Charles Barkley because he was undersized as a big man and competed like crazy. I also liked that he tried to shoot three-pointers, so I like to think I was a big man that could shoot from downtown. As I’ve aged, my game more resembles a spot up shooter like the Rockets surround James Harden with.”

Father Dolce’s favorite team has been the Houston Rockets for as long as he can remember and he was a huge fan of Hakeem “The Dream” Olajuwon and now enjoys watching Harden’s game.

Father Preston is also a big sports fan, and football and basketball are his top two favorites.

“Ultimately, I want to model my game after Christ and use the skills God gave me to give witness and connect with those that I am unable to reach through the doors of the church,” he said. “I want to show that it’s because of God that I am able to use my talents, not in spite of Him. In general, I enjoy watching March Madness or the playoffs for high school or pro.”

He said that he’d eventually like to grow the annual Priests vs. Seminarians game into a March Madness-style event.

“The vision is to one year have a March Madness with priests from other Archdioceses (New York, Chicago, Los Angeles, and more) to host such events and then have a Final Four among the priests,” he said. “It will be monumental!”

Seminarian Justin Cormie, a sports fan as well, especially for the Louisiana State University (LSU) Tigers, is keeping Seminarian team practice volume and team strengths as top secret information. He said he has liked sports since childhood and enjoys playing baseball and following college football. More than anything, he wants to bring awareness to the presence of St. Mary’s Seminary in Houston and vocations.

“The event helps bring exposure to and promotion of vocations to the priesthood,” he said. “I believe there are many in the Archdiocese that are unaware that we have our own seminary and my hope is that people learn that we are located right here in their backyard.”

Cormie also mentioned the value of playing sports. “Playing sports, especially team sports, are a good thing,” Cormie said. “They help cultivate community as well as teach someone how to overcome adversity. For example, in baseball, if you are successful at the plate 35 percent of the time, you would be considered one of the greatest ever! How will you ‘bounce back’ from missing the mark that 65 percent of the time?”

Father Preston said that sports can reach beyond the walls of the church.

“Blessed Frassati and St. John Paul II enjoyed sports and used sports as a vessel to reach beyond the church walls,” he said. “Pope Francis is continuing the legacy of St. John Paul II and the like. It is important to showcase our talents to others to give witness to Christ, whether it’s through athleticism, music, spirituality and more. This event will show kindness and community building by exhibiting friendly competition among the vocations.”

Father Dolce is looking forward to the event as a whole.

“It’s great for the people of God to see their priests and future priests as human beings who have interests other than praying,” Father TJ said. “I hope it brings awareness to vocations and is a fun celebration of our Catholic faith.”

The game will be broadcast live on Guadalupe Radio Network (GRN), KSHJ 1430 AM with play-by-play commentary by Joe McClane and Matthew Suniga. During halftime, there will be a three-point contest with representatives from the Catholic middle schools and high schools throughout the Archdiocese.

The game will begin with prayer and the national anthem sung by students from St. Elizabeth Ann Seton Catholic School. The game is open to the general public. Concessions will be available. Admission is free with donations being accepted to benefit St. Mary’s Seminary.