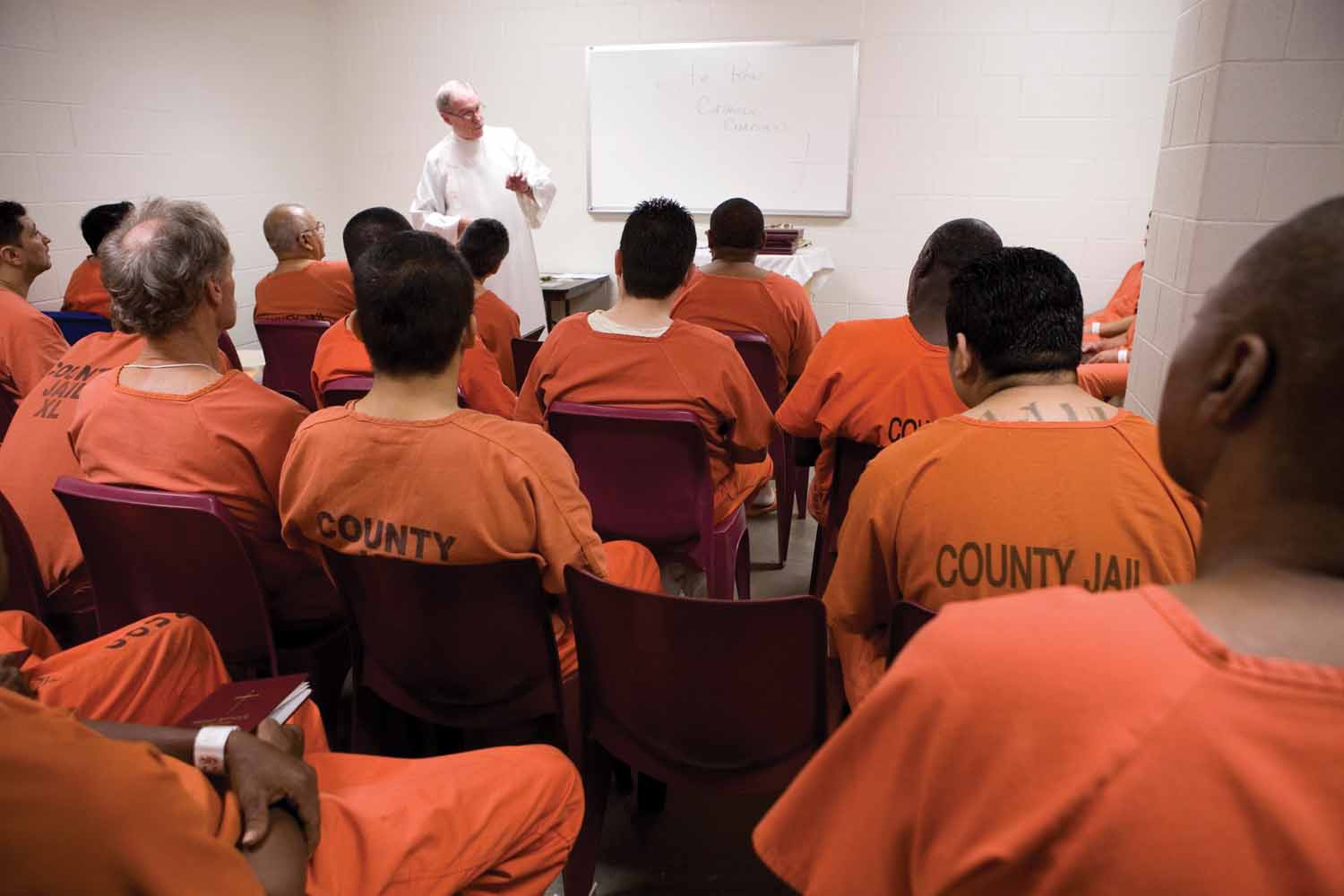 Father Ron Cloutier speaks with inmates at a prison facility in Texas. Father Cloutier retired after serving those in prison for more than 40 years. (Photo by Office of Correctional Ministries)

HOUSTON — “It’s time for me to be paroled,” says Father Ron F. Cloutier as he retired from directing Correctional Ministries for the Archdiocese after decades of providing for the spiritual needs of those in prison.

At 76 years old, with 47 of those years as a priest, Father Cloutier said he will remain active both in celebrating Masses and traveling across the country to consult with other dioceses setting up their own prison ministries.

“Texas is such a role model for ministering to those in prison. We are far ahead of the rest of the nation,” he said. “So after I rest up a bit, I’m going to Maine and also Charleston, South Carolina, to consult with those dioceses about prototypes.”

Under his chaplaincy, there were 10 county jails, 23 state jails and prisons, one federal prison and an immigration detention center.

“In one year, we celebrated 700 Masses with volunteer priests and 900 Communion services at the units,” he said.

The Texas Department of Criminal Justice operates the largest prison system in the United States, he acknowledged. It is responsible for adult offenders — including those in state prisons, state jails and private correctional facilities — funding and oversight of community supervision of offenders released from prison on parole or mandatory supervision.

“Catholics only make up 26% of the prison population. But we want to offer the Sacraments to them just as Protestants come into the prisons with revivals and crusades,” Cloutier said.

Catholics also began weekend Kolbe Ministries retreats in 2009, based on ACTS retreats and named after St. Maximilian Kolbe, the Polish friar who died in a German death camp during World War II, he said. The prison retreats offer incarcerated men and women the chance to experience God’s redemptive grace and mercy with a weekend featuring the Sacraments, small group sharing and more.

With the Archdiocese’s support, Cloutier expanded his ministry beyond the prison walls and helped create a total of four halfway houses for inmates being released. Three houses for men, including Isaiah House, and Angela House for women, give people a fresh start.

“The general recidivism rate of those being released back to their old environment is 55% going back to prison. For those who go to halfway houses as a stable place to live, the recidivism rate is now about 7%,” he said. “If we expect them to be contributing members of society, we need to help with education and jobs.”

Although Father Cloutier officially retired this past Dec. 31, 2019, the Archdiocese hosted a retirement dinner party for him Jan. 26. Guests ranged from Daniel Cardinal DiNardo, freshly returned from Rome visiting with Pope Francis, to several former inmates who wanted to thank Cloutier for helping to save their lives.

“The Cardinal would always say yes to the Correctional Ministries, whether it was him coming to confirm a group of men at a unit or for the Archdiocese to create transitional housing after incarceration,” Cloutier said.

Cardinal DiNardo told the crowd, “Father Ron’s ministry to the incarcerated is a needed reminder that the Word of God is not chained.” He called to mind St. Paul writing about his imprisonment in 2 Timothy 2:9, which states, “I suffer to the extent of being chained like a criminal. But the Word of God cannot be chained!”

Cloutier said, “There are so many success stories from our ministries. People have turned their lives around.”

One of his latest involves an 83-year-old man who served 30 years as a one-time sex offender.

“He’s now in a halfway house. We connected him with a local parish and he’s going to Bible study. He kept his Catholic faith in prison and is still going to Mass regularly,” Cloutier said.

Whenever the former inmate gets teased by younger halfway house residents, he drops down and “does 30 push-ups” and challenges them to do the same, the priest said and laughed.

“Here he is in the last stages of his life, and he appreciates the Church working and walking with him,” Father Cloutier said.

He recalled being an inner-city parish pastor in St. Louis, Missouri, in 1979 when he first received a call from then-Bishop John L. Morkovsky of the Diocese of Galveston-Houston asking him to begin a jail ministry.

At the time, the Texas prison system was under a class-action lawsuit by inmates for inhumane conditions, brutal treatment and lack of medical care. After months of testimony, the federal trial concluded in 1979 with U.S. District Judge William Wayne Justice ruling for inmates and ordering extensive changes in the way prisons operated.

“My relationship with God is one full of surprises. So when I came and took a tour of the jail, a deputy and I were stuck in an elevator for 45 minutes. After that, I knew how much work needed to be done,” Cloutier said.

He offered spiritual guidance to both law enforcement and offenders.

By 1996, then-Bishop Joseph A. Fiorenza approved formalizing the Archdiocesan Office of Correctional Ministries at the St. Dominic Center. Now the newly named director, Deacon Alvin Lovelady, who worked as associate director under Father Cloutier for four years, said, “It has been a great honor serving alongside Father Ron and a privilege to be part of this ministry.”

“I do see us going forward with more housing for ex-offenders and more quality jobs to support them in their efforts to become model citizens again,” said Lovelady in continuing Father Cloutier’s legacy.

Lovelady added, “And I see recruiting more volunteers to help spread the word of God in prisons and jails, and increasing public education. I invite anyone being pulled to this ministry to call our office and let us help you answer the call from Jesus, ‘Come and follow me, and I will make you fishers of men.’”