Listen to Sister: #RallyNuns set to return to Minute Maid for World Series 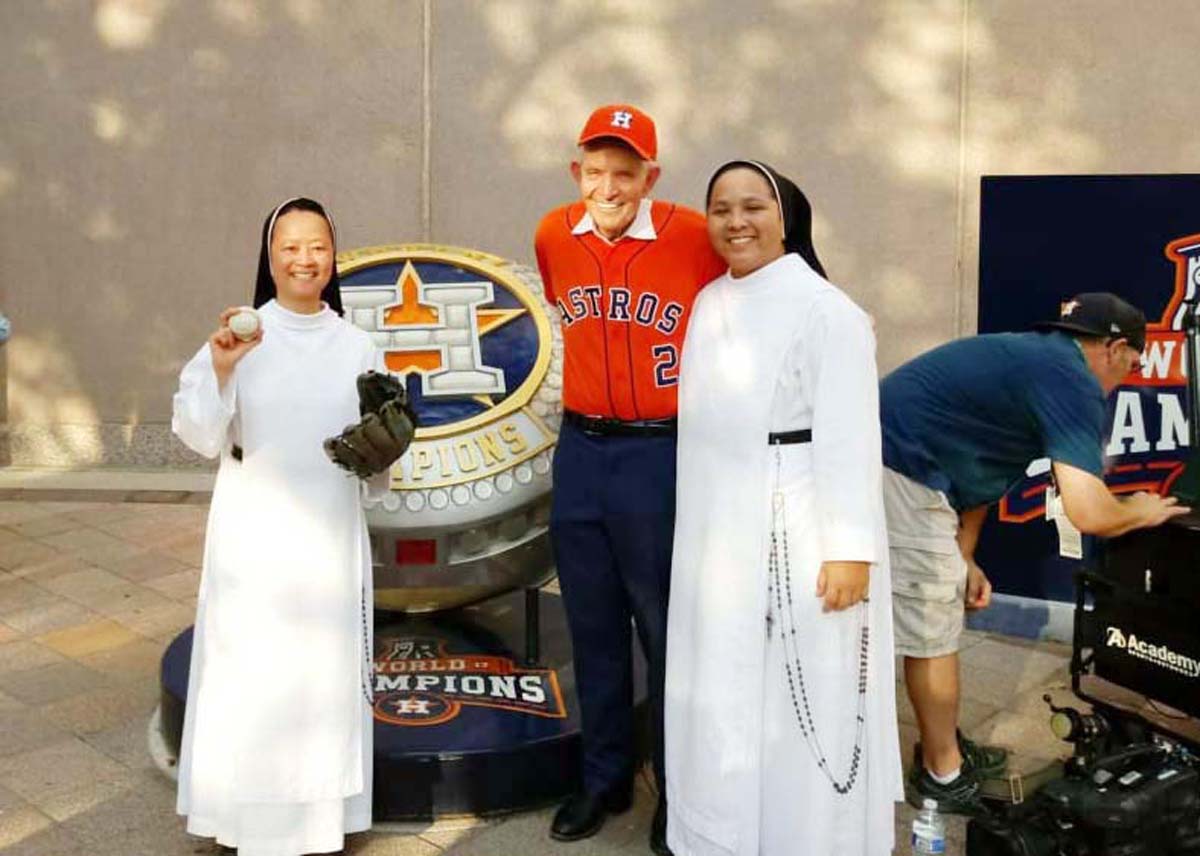 Sister Mary Catherine Do, OP, and Sister Anna Imelda Nguyen, OP, meet with Jim "Mattress Mack" McIngvale ahead of Game 6 of the American League Championship Series in Houston Oct. 22. The Houston legend and Catholic parishioner, Mattress Mack, helped bring the sisters to the game and is set to have them return for the World Series. (Photo courtesy of Sister Mary Catherine Do, OP / Dominican Sisters of Mary Immaculate Province)

HOUSTON - There might be angels in the outfield, but in the Space City, the Houston Astros have Dominicans in the stands. And in a sea of orange and blue garb, their bright white Dominican habits and black veils stand out.

Dubbed the "Rally Nuns," the Dominican Sisters of Mary Immaculate Province, a growing Vietnamese consecrated women's religious congregation in Houston, became a viral sensation when they filled the rows of Minute Maid Park for two games of the American League Championship Series (ALCS) in Houston in late October. The Astros won both games, helping them to topple the Boston Red Sox to punch their ticket to the World Series.

The sisters are set to return for Game 1 of the World Series on Oct. 26 thanks to Houston legend Jim "Mattress Mack" McIngvale.

Sister Mary Catherine Do, OP, who previously taught at St. Elizabeth Ann Seton Catholic School in Houston and now teaches in Shiner, Texas, threw the first pitch of Game 6 of the ALCS. She joins an elite list of Galveston-Houston Catholics who have taken to the mound, including Daniel Cardinal DiNardo, Archbishop Joseph A. Fiorenza and a number of Catholic school teachers and superintendents.

Though she isn't the first sister to go viral for her throw -- that goes to Dominican Sister Mary Jo Sobieck, OP -- Sister Mary Catherine stepped into the limelight to remind the Astros that "this is our time!"

Wearing a custom jersey with "RALLY NUNS" declared on the back (it also matched her white habit perfectly), Sister Mary Catherine took to the field, her black Rosary beads swinging with each jovial step.

Crossing near home plate, she pointed a finger heavenward. A few long steps shy of the pitcher's mound, she turned around and faced the catcher and, after a brief pause (maybe a quick Memorare?), she gave the ball some heat for a successful floating first pitch.

Then, in a quick sequence that only a consecrated religious woman could do, Sister Mary Catherine raised her glove and pitching arm in celebration, pointed to her wrist in a tongue-in-cheek reference to Astros' shortstop Carlos Correa's "it's time" move, flipped her veil over her shoulder, then pointed at her congregation in the stands behind her near where Tal's Hill once stood. Finally pointing again heavenward, as the crowds cheered, she slowly made her way down the baseline to greet Orbit the Astros mascot as Red Sox and Astros staff slowly filled their dugouts.

Though no longer teaching within the Archdiocese, Sister Mary Catherine teaches at St. Paul Catholic High School in Shiner about two hours from the downtown Houston stadium. Her congregation is well-known throughout the Archdiocese, active in many catechetical roles and teaching positions at parishes and Catholic schools in the region.

Explaining her post-pitch watch-pointing celebration move, Sister Mary Catherine told the Houston Chronicle that she "did that, because this is the Astros time, this is our time, this is it."

McIngvale gifted a number of tickets to both Game 1 and Game 6 of the ALCS. A longtime parishioner of Assumption Catholic Church off Airline Boulevard in Houston, the Gallery Furniture maven has been an outspoken advocate for Catholic education and his faith. He has supported many Catholic schools and the University of St. Thomas, and credited his faith for his actions during Hurricane Harvey and Houston's other weather storms.

"I never thought I'd have the opportunity to throw out the first pitch," Sister Mary Catherine told ABC 13. "This is not just a regular game. A playoff game!"

A number of Dominican Sisters of St. Cecilia Congregation, who teach at Frassati Catholic High School, were also at Game 6 to root for the Astros.

Both Dominicans join the faithful Sisters of the Incarnate Word and Blessed Sacrament, the congregation that runs Incarnate Word Academy across the street from Minute Maid and next to Annunciation Catholic Church. The sisters are also well-known for their devotion and support of the Astros. Sister Damien Kuhn, CVI, had a permanent season ticket for seat 31 in row 35 of Section 116.

Though she died in 2010 at age 90, Sister Kuhn is a rally sister in heaven, cheering for the Astros, alongside the Dominican Sisters down below in Minute Maid Park, who wave their rally towels and clutch their Rosary beads.