Lent is time to grow in faith, hope, love and to share them, pope says 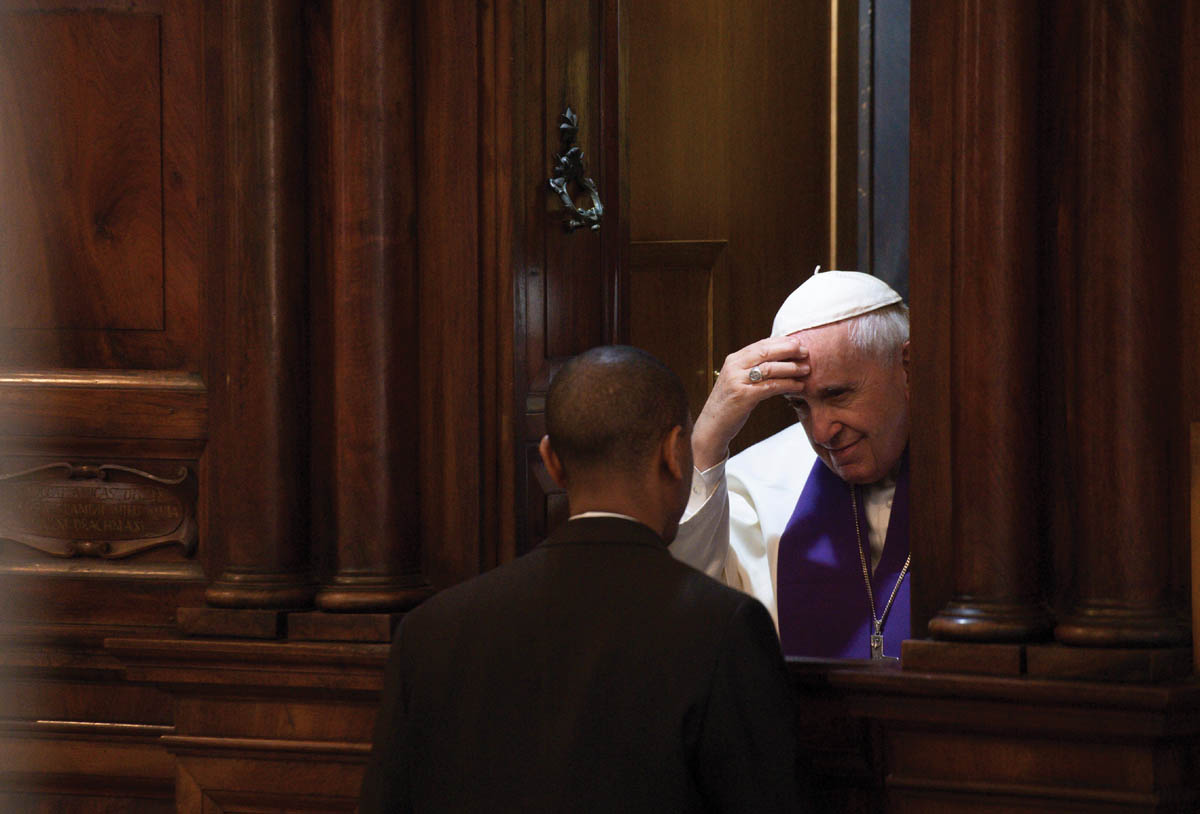 Pope Francis hears the confession of a priest at the Basilica of St. John Lateran in Rome in this March 7, 2019, file photo. In his message for Lent, Pope Francis said the season is “a time for renewing faith, hope and love.” (CNS photo)

VATICAN CITY (CNS) — As Christians pray, fast and give alms during Lent, they also should consider giving a smile and offering a kind word to people feeling alone or frightened because of the coronavirus pandemic, Pope Francis said.

“Love rejoices in seeing others grow. Hence it suffers when others are anguished, lonely, sick, homeless, despised or in need,” the pope wrote in his message for Lent 2021.

The message, released by the Vatican on Feb. 12, focuses on Lent as “a time for renewing faith, hope and love” through the traditional practices of prayer, fasting and almsgiving. And by going to confession.

Throughout the message, Pope Francis emphasized how the Lenten practices not only promote individual conversion but also should have an impact on others.

“By receiving forgiveness in the Sacrament that lies at the heart of our process of conversion, we, in turn, can spread forgiveness to others,” he said. “Having received forgiveness ourselves, we can offer it through our willingness to enter into attentive dialogue with others and to give comfort to those experiencing sorrow and pain.”
The pope’s message contained several references to his encyclical “Fratelli Tutti, on Fraternity and Social Friendship.”

For example, he prayed that during Lent Catholics would be “increasingly concerned with ‘speaking words of comfort, strength, consolation and encouragement, and not words that demean, sadden, anger or show scorn,’” a quote from the encyclical.

“In order to give hope to others, it is sometimes enough simply to be kind, to be ‘willing to set everything else aside in order to show interest, to give the gift of a smile, to speak a word of encouragement, to listen amid general indifference,’” he said, again quoting the document.

The Lenten practices of fasting, almsgiving and prayer were preached by Jesus and continue to help believers experience and express conversion, the pope wrote.

“The path of poverty and self-denial” through fasting, “concern and loving care for the poor” through almsgiving and “childlike dialogue with the Father” through prayer, he said, “make it possible for us to live lives of sincere faith, living hope and effective charity.”

Pope Francis emphasized the importance of fasting “as a form of self-denial” to rediscover one’s total dependence on God and to open one’s heart to the poor.

“Fasting involves being freed from all that weighs us down — like consumerism or an excess of information, whether true or false — in order to open the doors of our hearts to the one who comes to us, poor in all things, yet full of grace and truth: the son of God our savior.”

Peter Cardinal Turkson, prefect of the Dicastery for Promoting Integral Human Development, presenting the message at a news conference, also insisted on the importance of “fasting and all forms of abstinence,” for example, by giving up “time watching TV so we can go to church, pray or say a Rosary. It is only through self-denial that we discipline ourselves to be able to take the gaze off ourselves and to recognize the other, reckon with his needs and thus create access to benefits and goods for people,” ensuring respect for their dignity and rights.

Monsignor Bruno-Marie Duffe, secretary of the dicastery, said that at a time of “anxiety, doubt and sometimes even despair” because of the COVID-19 pandemic, Lent is a time for Christians “to walk the way with Christ toward a new life and a new world, toward a new trust in God and in the future.”