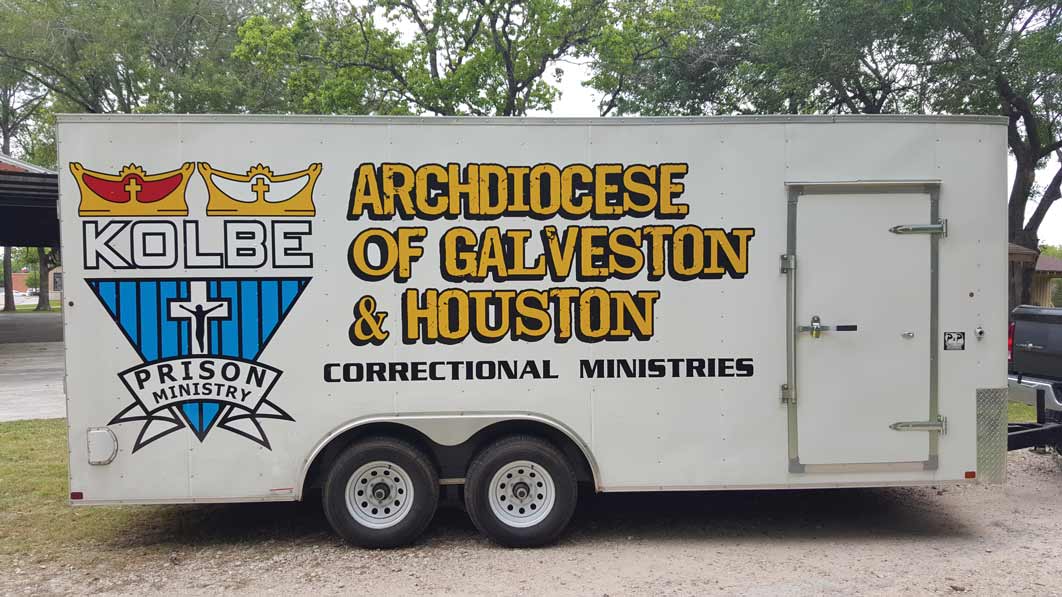 HOUSTON — Looking through the lens of the ministers who serve the incarcerated men and women in prisons and jails, one can clearly see God’s love, grace and goodness, even within the most unhealthy, unsanitary and sometimes, even brutal environments found within these walls.

According to Father Ron Cloutier, who has overseen the Office of Correctional Ministries of the Archdiocese of Galveston-Houston for more than 25 years, the mantra of those who serve the incarcerated through this ministry was inspired by Old Testament Scripture: “You have been told, O mortal, what is good, and what the Lord requires of you: Only to do justice and to love goodness, and to walk humbly with your God.” Micah 6:8 (NABRE)

“This Scripture applies to the all chaplains and volunteers who serve within the prisons, for we must truly love what we do, do what is right and walk humbly as we minister,” Father Cloutier said. “It’s about loving the goodness we find in every person we meet, despite the individual’s circumstances. When we talk about pro-life, it’s about having the faith to see the goodness in all people and actually loving that goodness.”

Currently, the Office of Correctional Ministries serves approximately 18,000 incarcerated Catholics in 26 state prisons, 10 county jails, one federal institution, and countless city jails within the boundaries of the Archdiocese. Over the last calendar year, in addition to the three full-time staff members and several bishops and priests who volunteer their time, 20 deacons and 200 lay volunteers minister on a regular basis inside these facilities.

In 2016-17 alone, approximately 650 Masses and 900 communion services were celebrated, as well as over 1,000 confessions heard and 600 RCIA programs held inside the prison walls. It is one of 60 ministries supported by the Diocesan Services Fund (DSF).

“This is all made possible through the generosity of the priests, deacons and lay people who serve the incarcerated and their families, victims of crime and violence, and families of law enforcement personnel,” said Father Cloutier. “As Catholics, we believe the power of God’s grace can be found through the Sacraments, so our number one focus is to ensure that those of our Catholic faith living inside prisons have access to the Eucharist, Reconciliation and Confirmation. That is our sacramental commitment to them.”

Father Cloutier said the Office of Correctional Ministries has always been blessed by the tremendous amount of support from Daniel Cardinal DiNardo and Auxiliary Bishop George Sheltz, who both come to the prisons each year to celebrate Confirmation Masses with the prisoners.

He said one of the ministry’s most successful programs is the St. Maximilian Kolbe Prison Retreat, like ACTS Retreats held at the parish level. About 80 inmates attend each retreat held inside the prisons, which have resulted in many new confessors and converts to the Catholic faith. Also, after the retreats are over, Father Cloutier said many inmates form small faith communities within the walls to keep their faith alive while serving time. Currently, St. John the Baptist Catholic Church in Alvin and St. Anthony of Padua in The Woodlands provide volunteers for the retreats as well as purchase all needed supplies and storage when not in use.

Volunteer Seth Whitmire has been with the core team of Kolbe Retreats since March 2013, and is currently the Core Team director for the Archdiocese. Whitmire is responsible for contacting the prison chaplains to schedule retreats, recruit volunteers, and with assistance from the Office of Correctional Ministries, schedule other Catholic programs in the same prisons.

Whitmire said he knew this was his calling after volunteering at one of the first ever Kolbe Retreats held in January 2013.

“The offenders feel less than human, unloved by society, forgotten. So when we go in we show them that God has not forgotten them, and we show them the love that every person deserves,” Whitmire said. “Some of these men have never had a person hug them or actually care about them at all. We show them that we do care; we hug them, talk to them about how some of our lives parallel the lives they led and that with God’s help, we can all change the outcome of our lives.”

Whitmire said he feels it is important to talk to the men about how to be better members of society, too, even while incarcerated, as well as once released. The ministers talk to them about bringing Christ into their homes, so they may become better husbands, fathers, sons, etc.

“I feel that it is our responsibility of the people of the Archdiocese to take care of our brothers and sisters in Christ that are incarcerated, just as they do for the men and women free in the world,” Whitmire said. “In Matthew Chapter 25: 31-46, the Judgment of Nations, the Lord states, ‘Amen, I say to you, whatever you did for the least of these brothers of mine, you did for me.’ God loves each and every one of us the same, and no one is better than the other, so when the incarcerated are released one day, wouldn’t you want them as a neighbor if they have come to know the Lord or would you rather they lead a life without having known Christ?”

Whitmire said one of the most memorable letters he received from an inmate who attended a Kolbe Retreat was from “Robert” at the Luther Unit. Robert was a devout Southern Baptist, and while attending the retreat, became agitated when he learned about the Rosary.

“Robert became quite upset that we were praying to Mary and believed we would all spend eternity in hell for doing so,” said Whitmire. “I spent time explaining to him personally about Momma Mary and that I also once held the same misconceptions about the Rosary and Mary. Afterward, during the retreat, Robert still had some fears about praying the Rosary, but he did it anyway and even led the Rosary on the last retreat day!”

Whitmire said Robert wrote him a letter about a month later, telling Whitmire all about the new “Momma” in his life, the Blessed Mother Mary, who was always there for him to help in his daily struggles and during very difficult moments. Robert wrote that he now prays the Rosary daily, and leads the weekly Rosary group in the prison.

Another inmate who wrote Whitmire a memorable letter was named “Charles” from the Terrell Unit. Charles wrote that after the Kolbe retreat was over, the retreatants still gathered together as often as possible for praise, worship and fellowship. Charles wrote, “There is a new gang at Terrell that has taken over... the Kolbe gang!”

Father Cloutier said the ministry’s programs like the Kolbe Retreat would not be possible without DSF support.

“We are able to purchase Bibles, Rosaries, prayer books and other materials needed for ministering inside the prisons walls on a daily basis, as well as the needed supplies to conduct the Kolbe retreats and vans to store them in between the retreats,” Father Cloutier said. “Next year alone, the number of Kolbe retreats held will double from where the program started two years ago, so this funding is even more critical.”

Whitmire agrees the DSF helps them to effectively minister to the imprisoned.

“DSF is vital to these men’s and women’s souls,” he said. “In Section 900 of the Catechism, we find that we have the ‘...right and duty, individually or grouped in associations, to work so that the divine message of salvation may be known and accepted by all men throughout the earth.”