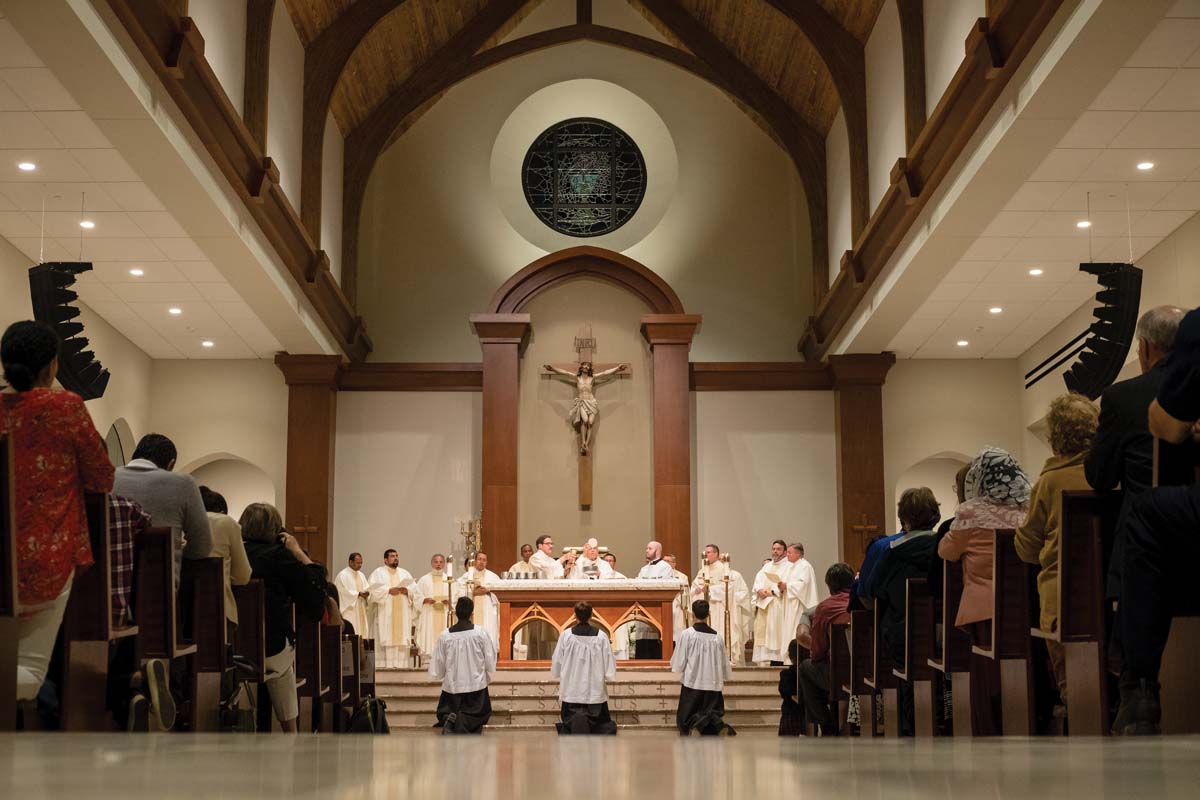 Daniel Cardinal DiNardo elevates the Eucharist during the Mass of Dedication at Sacred Heart Catholic Church in Conroe Nov. 8. Led by Father Philip Wilhite, the parish has grown from its humble beginnings as a mission church to a burgeoning parish of more than 7,000 families while still focused on its mission of evangelization and faith. Photo by James Ramos/Herald.

CONROE — Standing beneath the midnight blue dome, Thelma Kidonakis looked quite small.
It was almost as if the nighttime sky had opened up over the newly built sanctuary at Sacred Heart Catholic Church in Conroe. The dome, soaring above the church’s center aisle, was a midnight blue, a nod to Mary’s well-known association with the deep-colored hue.

Looking at the altar, Kidonakis watched Daniel Cardinal DiNardo elevate the Eucharist during the Mass of Dedication for the parish’s newly built church sanctuary on Nov. 8. Kidonakis, with the hundreds of other parishioners who filled the new pews and made it standing room only, attended the first Mass in the sanctuary.

“We are here tonight to celebrate this dedication, and there are many good stewards and many of you are God’s holy people and one of the reasons why this church is built,” Cardinal DiNardo said. He also thanked the concelebrating Archbishop Emeritus Ubaldo Ramón Santana Sequera of Maracaibo, Venezuela, for attending the Mass.

Cardinal DiNardo said to the parishioners: “You are our building, too. You are the building superior of what happens in this building; the beauty of its four walls, the stone, brick, wood, marble. But, as St. Paul reminds us, you have to build the temple of Christ’s body the Church and you are that temple.”

He shared of his October experience in Rome at the Synod of Bishops for the Young People.
He said Pope Francis repeatedly told the bishops and young people “that we have to learn anew in the Church to accompany and listen and only then speak a word of encouragement or preaching we have to learn to listen and accompany. And if that’s true of young people that’s got to be true of everyone else. So Sacred Heart parish, beginning tonight as God’s word is unfurled for you at each Mass, you listen and hear.”

He also called the parishioners to focus on a mission of unity.

Beneath the altar, Father Wilhite placed a relic of St. Margaret Mary Alacoque, a French nun and mystic known for her visions of Jesus and Mary and devotion to the Sacred Heart of Jesus.

The lighting of the altar and the church finally brought brightness to the darkened church and to its parishioners’ faces. Children and their parents gazed at their church, many for the first time.
In a closing comment, Father Wilhite gave thanks to God for the dedication Mass, including for what God started in the beginning.

Father Wilhite called it a “joy” to be to see the parish’s growth not as numbers “but in the beauty of brothers and sisters, family gathered all around us.”

“As we gather tonight that is the beauty of the glory of God to be able to see the talents and gifts of each one of us and how we’ve used them through the years,” he said. “To be able to come to this night to praise him and to thank him for the good that he has begun in us that he desires to bring fullness to completion. As we give thanks tonight I ask you to think for a moment about how you have been a part of the building of this church, of the building of this parish community.”

After the Mass, Kidonakis stopped to pray before the altar. She found her faith illuminated by the dedication Mass.

Since the dedication Mass, the parish’s sacramental life thrives ever greater. In the days following the dedication, the parish fully embraced its new church building’s beginning when it also welcomed its first wedding celebrations in its St. Mary of the Woods Chapel and main sanctuary.
In the narthex, history welcomes visitors, with the original 1972 stained glass of the Sacred Heart of Jesus now promptly displayed to greet all who enter. Opposite, far down the center aisle, the altar window shows the Eucharist in a chalice and communion host to bring the focus to the Blessed Sacrament.

Reflecting on the parish’s growth, faith and new church building, Father Wilhite found inspiration in his parish and the dedication Mass.

“It was such a blessing to finally worship in our new Church during the dedication knowing that God accomplished this over a period of more than 10 years,” he said. “I was overwhelmed with joy to see all the parishioners and others who came to praise and grateful to God for what he has accomplished through us. Many people partnered and it was working as a team that we were able to do this for the glory of God.” †