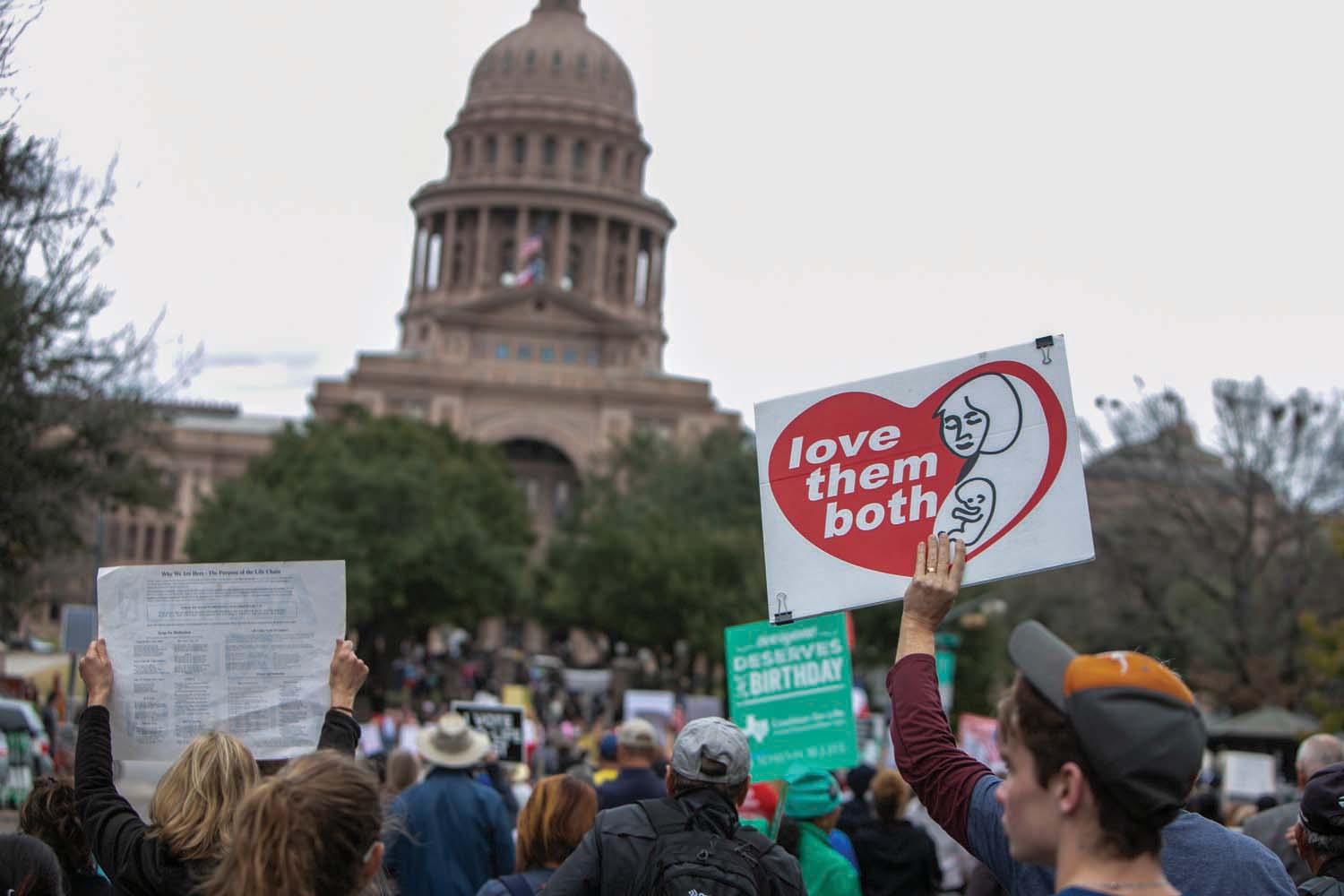 A protestor carries a sign that says “love them both” during a prolife march in Austin in 2020. On May 2, a draft of the Supreme Court of the United States’ opinion was leaked signaling that the court was leaning toward overturning Roe v. Wade. (File photo by James Ramos/Herald)

WASHINGTON (CNS) — The Supreme Court appears set to overturn its Roe v. Wade decision, which legalized abortion for nearly 50 years, according to a leaked initial draft of a court opinion obtained by Politico and published online the evening of May 2.

Just minutes after the leak was published, reactions were fast and furious on social media, and barricades were erected around the Supreme Court. Many people gathered at the court in protest and some, including students from The Catholic University of America, were there to pray the rosary.

The draft opinion, written by Justice Samuel Alito, said Roe “was egregiously wrong from the start” and that “Roe and Casey must be overruled.” Casey v. Planned Parenthood is the 1992 decision that affirmed Roe.

Policies at a state level
Alito’s opinion said the court’s 1973 Roe decision had exceptionally weak reasoning, “and the decision has had damaging consequences. And far from bringing about a national settlement of the abortion issue, Roe and Casey have enflamed debate and deepened division,” he wrote.

He also said abortion policies should be determined at the state level.

The 98-page draft, which includes a 31-page appendix of historical state abortion laws, is an opinion in Dobbs v. Jackson Women’s Health Organization — a case about Mississippi’s ban on abortions after 15 weeks of pregnancy with the potential to also overturn Roe.

A May 3 statement by the Supreme Court verified that the draft opinion reported on “is authentic” but that it “does not represent a decision by the court or the final position of any member on the issues in the case.”

In his own statement, Roberts emphasized the significance of the leaked document, which he said was a “singular and egregious breach of that trust that is an affront to the Court and the community of public servants who work here.”

He also said that if this action was “intended to undermine the integrity of our operations, it will not succeed. The work of the court will not be affected in any way.” He said he has directed the Marshal of the Court to launch an investigation into the source of the leak.

Politico acknowledged that “deliberations on controversial cases have in the past been fluid. Justices can and sometimes do change their votes as draft opinions circulate and major decisions can be subject to multiple drafts and vote-trading, sometimes until just days before a decision is unveiled.”

“The court’s holding will not be final until it is published, likely in the next two months,” it added.

Groups respond
Pro-life groups praised the court’s potential decision but some also questioned the motivation behind the leak and wondered if the court was being manipulated by this action.

Jeanne Mancini, president of the March for Life Education and Defense Fund, said the organization believed that “the court should issue a ruling as soon as possible. This leak was meant to corrupt the process. It is heartbreaking that some abortion advocates will stoop to any level to intimidate the court no matter what the consequences.”

Marjorie Dannenfelser, president of the Susan B. Anthony List, also expressed some skepticism but also praise for the potential decision.

“If the draft opinion made public tonight is the final opinion of the court, we wholeheartedly applaud the decision,” she said in a statement adding: “If Roe is indeed overturned, our job will be to build consensus for the strongest protections possible for unborn children and women in every legislature.”

Those on the other side of the issue were similarly taken aback by the leak but also by the potential impact of the decision if it ultimately echoes the draft opinion.

American Civil Liberties Union tweeted: “If the Supreme Court does indeed issue a majority opinion along the lines of the leaked draft authored by Justice Alito, the shift in the tectonic plates of abortion rights will be as significant as any opinion the court has ever issued.”

The case in question
During oral arguments in this case last December, a majority of the justices indicate that they would uphold Mississippi’s abortion ban after 15 weeks of pregnancy, which was struck down by a federal District Court in Mississippi in 2018 and upheld a year later by the New Orleans-based U.S. Court of Appeals for the 5th Circuit.

A 15-week ban is not a “dramatic departure from viability,” Roberts said.

If the court adopts this draft, it means a ruling in favor of the Mississippi abortion ban. If it goes further to overturn Roe, there would be stricter limits to abortion in parts of the U.S., particularly the South and Midwest, with several states set to immediately impose broad abortion bans.

“The leak related to the U.S. Supreme Court case of Dobbs v. Jackson Women’s Health Organization reminds us of the urgent need for prayer and action at this pivotal moment in our country, he said in a May 4 statement.

“As Catholics, we care about every unborn child and every mother. Our Church has consistently witnessed in word and deed that life begins at the moment of conception,” the statement continued, emphasizing the numerous activities and outreach efforts the U.S. church leads to support families and women.

Archbishop Lori also encouraged the faithful “to intensify their prayer and fasting that the final decision of the Court will bring about the reversal of Roe and Casey.”

“We hope and pray for a change in our laws and stand ready to help all pregnant women in need in each of our communities,” he said.