Laura’s wreckage too close and too familiar 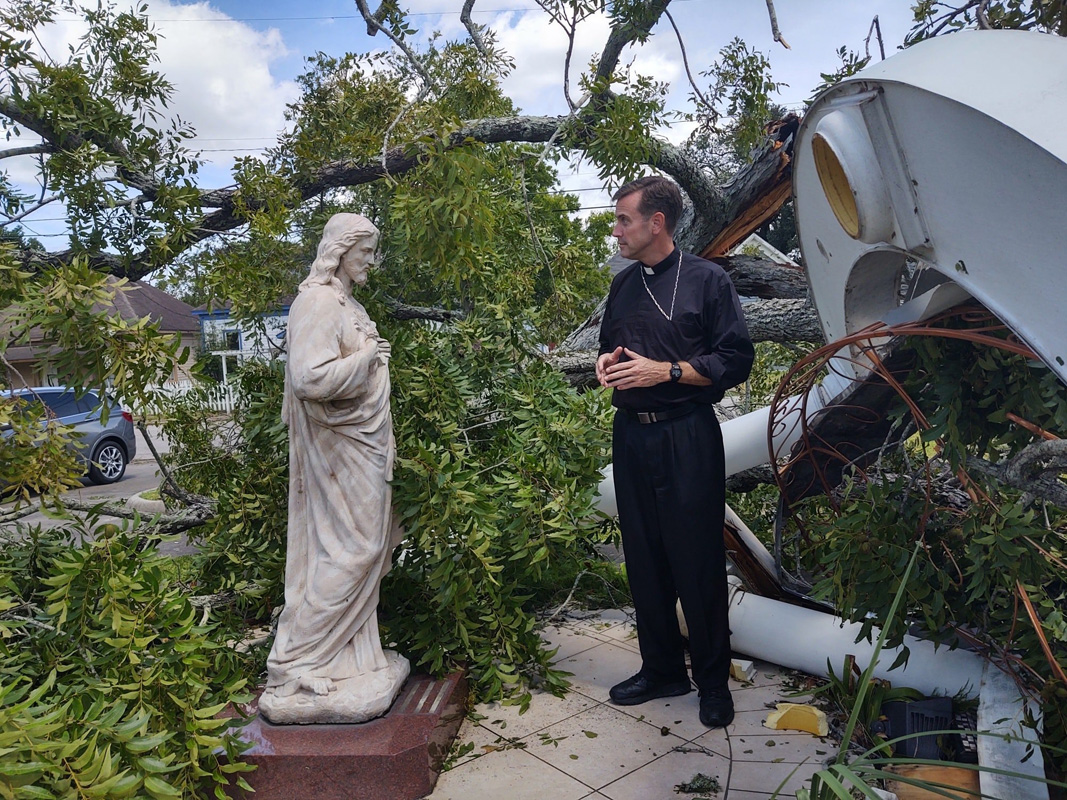 Beaumont Bishop David Toups look on a statue of Jesus at St. Mary Catholic Church in Orange, located less than a mile from the Sabine River and Texas-Louisiana border, after Hurricane Laura slammed into the Gulf Coast Aug. 27. For ways to help, visit www.archgh.org/laurarecovery. (Photo courtesy of Diocese of Beaumont)

PORTER — Meris Bridger has seen hurricane damage before, but never to her own family’s home.

She spent time in New Orleans helping renovate after Hurricane Katrina 15 years ago, but the place she spent holiday celebrations for decades now had a massive pine tree that split the home in two like a log.

When Laura’s path was projected between Houston and New Orleans, the entire region shuddered. Memories of Katrina, Rita, Ike and Harvey were all too familiar and too recent.

When Hurricane Laura made landfall 35 miles east of the Texas-Louisiana border in the early hours of Aug. 27, the Category 4 storm, nearly Category 5, shredded the region with 150 mph winds bringing catastrophic damage.

Her parents, at their creek side home in Mittie, Louisiana, some 55 miles northwest of Lake Charles, rode out the storm at home.

While Bridger was asleep in her Humble-area home, her father, Charles Chaumont, got out of bed to talk to his wife Lynn Chaumont, who was in another room. Seconds later, one of the massive pine trees that surround their home crashed through the roof and onto the bed where he had just been sleeping.

The outside was now inside.

Her parents would safely make it through the storm, but the storm’s death toll would rise to 16 by Aug. 28, most of the casualties in Louisiana. Total deaths reported Sept. 2 stateside was 24.

No power and no phone service made it difficult for Bridger, the religion coordinator and middle school religion and social studies teacher at St. Mary Magdalene Catholic School in Humble, to reach her parents. But when she did, she heard her mom choke up on the phone.

In her mind, Bridger pictured downed trees around the home, but not inside the house. Located near the Whisky Chitto Creek, the house is up on towering 15-foot stilts, protecting it from floods, but not wind.

That Friday, after posting on social media about her parents’ being safe, Bridger prepped to head east to help her parents. Then came a deluge of help, with friends, colleagues and family all pitching in to offer assistance. Water, tarps, chainsaws, even a donated delivery truck to carry the supplies, would travel with her and her husband Brandon to Mittie to help.

What she saw was worse than she imagined.

On the drive, which usually takes three hours but was nearly five, they saw entire homes moved off foundations. Roofs sheared off houses now sat in fields next to cows munching on grass. Tall utility poles were snapped like twigs, bent over blocking the roadways.

When they finally got to her parents’ home, there was no sense of relief yet. The half-mile road into the property was still impassable, but she could hear the faint sound of chainsaws revving. Trekking past a jungle of downed trees and branches, she finally saw her father atop a tractor helping direct the tree demolition.

“They really were OK,” she thought, laying eyes on her parents.

“Go see your mom. She needs you,” Bridge’s dad would tell her.

But the rain made it difficult, and the roadway was six inches of mud, so she trekked back to get some rain boots and made her way to her mom. Her sister had arrived earlier, and she saw her mom and her sister in the kitchen, clearing what mess Laura had left.

She finally saw the tree that had split the home in two. 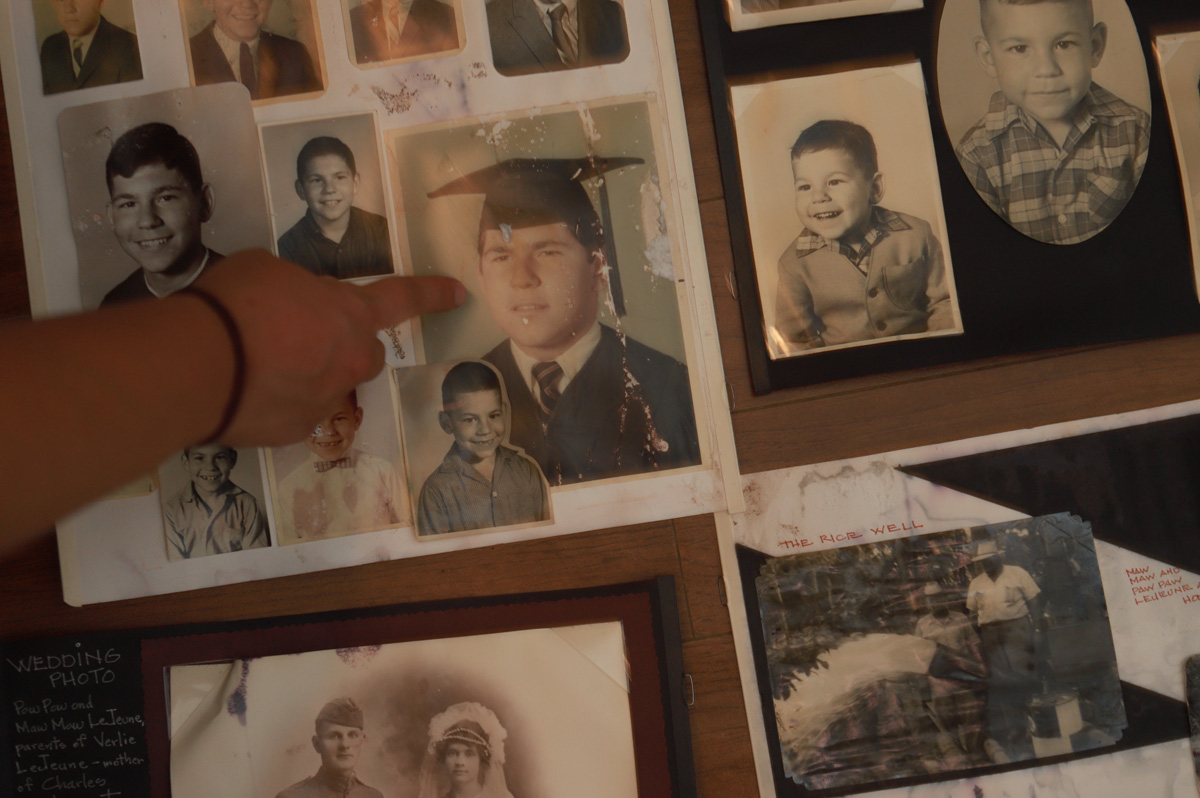 Pine trees are a way of life in south-central Louisiana. Native American artists used their needles to weave intricate baskets and craft-works, an art Bridger’s grandparents and parents picked up. These handicrafts were some of the many things she’d truck back home to keep while her parents began their recovery.

And the massive, 5,000-pound pine tree, whose needles gave her family art, shared memories and even shade from the Louisiana sun, now cut their life in two.

Bridger’s dad would later tell her that “the trees falling sounded like bombs.”

“I’ve never heard a pine snap in half,” she said, “but that’s what they were hearing, right?”

In New Orleans, she had seen how black mold, dripping from ceilings and furniture, destroyed family heirlooms and photographs that hung on the walls, so Bridger reclaimed these family treasures first, pulling frames off slanted walls.

Original photos of her lineage were now warped, some reproductions now bled across the pages.

“Just find my Rosary,” her dad told her. And her mother, who loves sewing, was able to save her sewing machine.

Still, Bridger was thankful her parents were OK. Thinking about the home and everything that’s been lost, she realized “that everything in there is replaceable, except for my parents,” she said. “I can’t replace my mom and my dad.”

Throughout her brief visit there, her dad often remarked he felt like a king, even after losing his home and nearly being crushed by a tree.

Diagnosed with prostate cancer, and undergoing treatment last year, seemed to have changed his perspective on life, she said. A few moments, he’d look around, and say he was thankful, she said.

Nearby friends rallied to help clear their road from downed trees. A neighbor offered a place to stay and a home for their beloved pets, including cats, dogs and chickens. Bridger made breakfast with the chickens’ eggs that next week.

Bridger had to return home because Monday, Aug. 31, was the first day of the first full week of school (most schools had several days off because of Laura’s expected arrival).
That Monday, two days after she saw her parent’s home wrecked by a nature, was the best first day of school she ever had, Bridger said. Her students, also dealing with their own stresses from the pandemic like remote learning and in-person learning, still beamed bright as ever to see their teacher smile back. 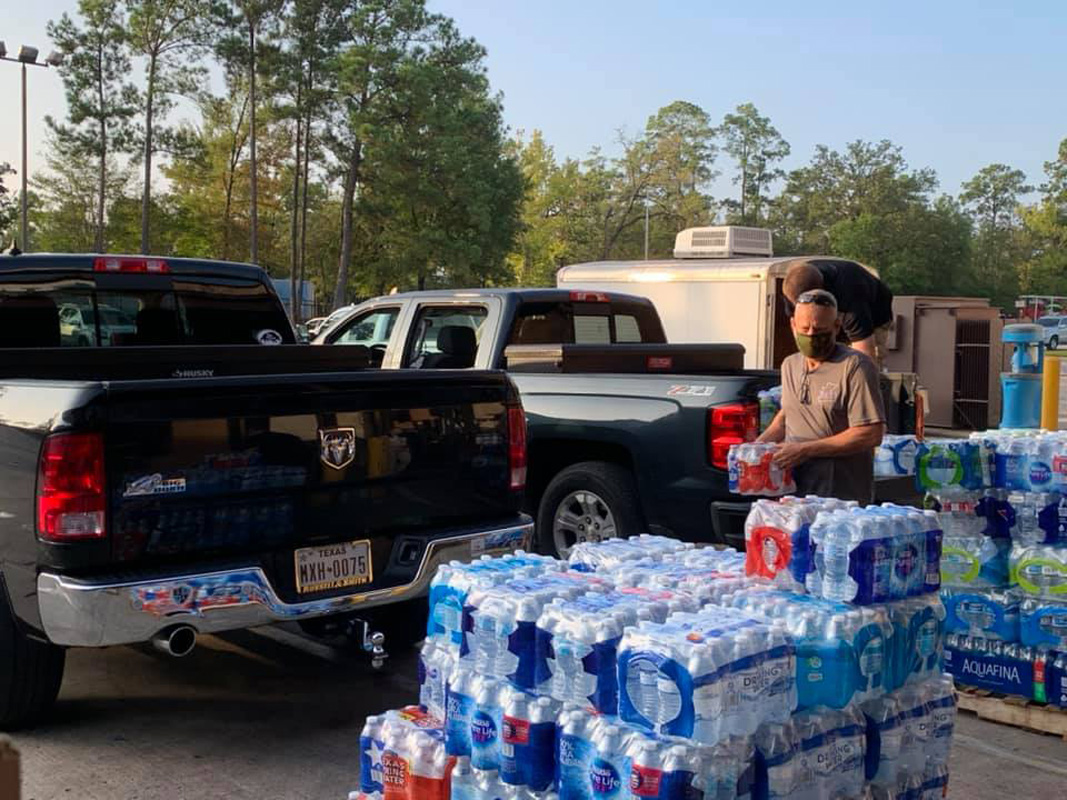 Parishes and organizations across the Archdiocese have been coordinating Hurricane Laura relief efforts.

Through the Knights of Columbus of Galveston-Houston emergency response team, the Knights responded to a request for water to assist with relief work.

Sister Maureen O’Connell, OP, Archdiocesan director for the Secretariat of Social Concerns, coordinated with the Knights to offer this aid after the call for water came. Just 72 hours later, truckloads of water were on their way to Lake Charles.

In coordination with the Montgomery County Food Bank, St. Anthony of Padua Catholic Church in The Woodlands also coordinated a delivery of 13 pallets of water to be sent to Louisiana.

St. Ignatius of Loyola Catholic Church in Spring, which was devastated by Hurricane Harvey in 2017, coordinated an ecumenical supply drive to benefit storm relief.

Immediately after the storm, Archdiocesan leaders were in contact with Bishop David L. Toups of Beaumont to coordinate relief efforts there.

The Beaumont diocese saw damage to 15 parishes, with the greatest impact along the eastern border of the diocese.