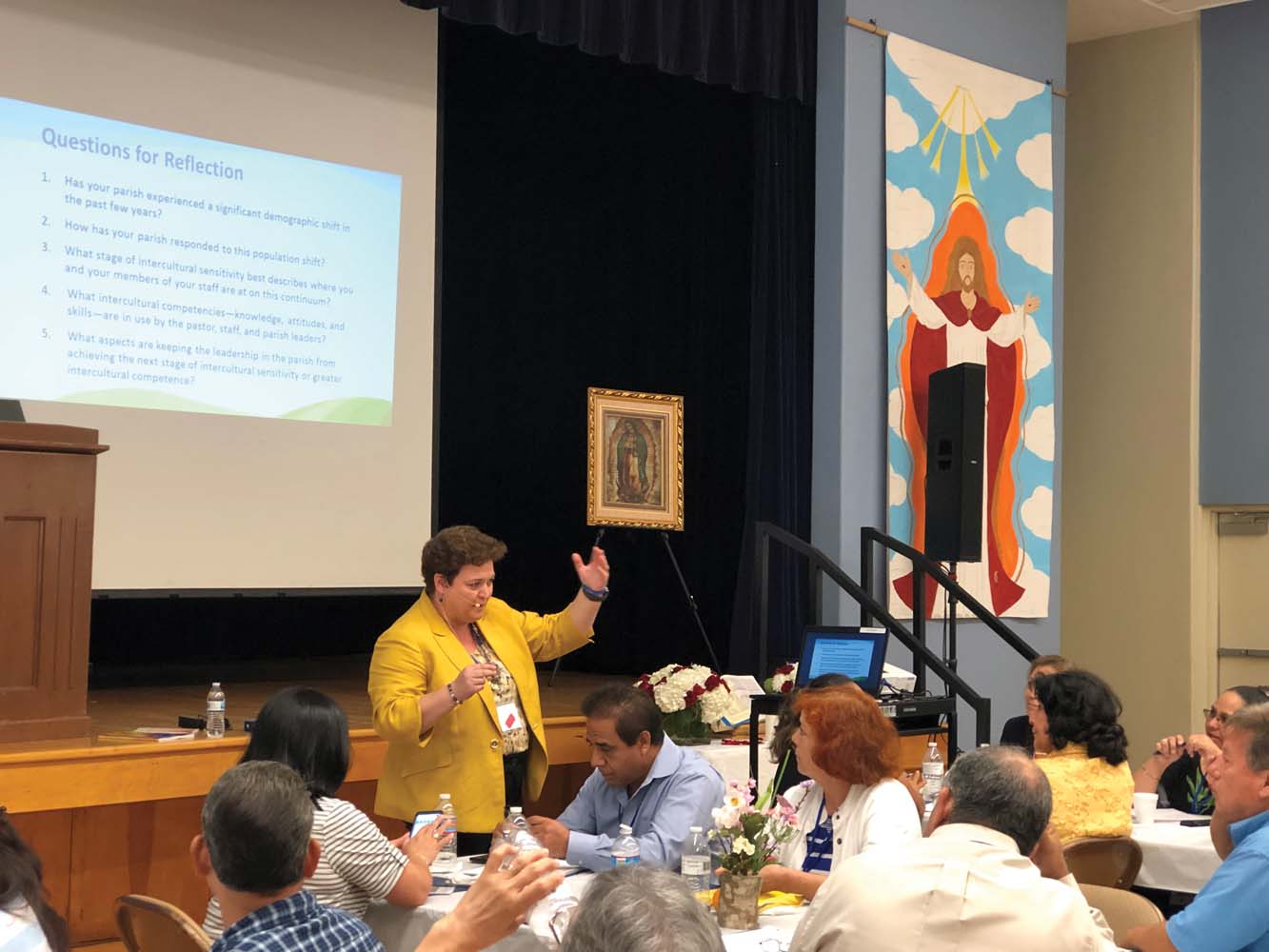 Keynote speaker Mar Muñoz-Visoso, executive director of the Secretariat of Cultural Diversity in the Church at the U.S. Conference of Catholic Bishops, encourages Hispanic Ministry Conference participants to be leaders and disciples. (Photo Courtesy of Archdiocese of Galveston-Houston Hispanic Ministry Office)

HOUSTON — The U.S. Church can be led by Latino Catholics, a director of cultural diversity with the U.S. Conference of Catholic Bishops (USCCB) told about 250 primarily Hispanic lay ministers, deacons and priests at the Archdiocese of Galveston-Houston Hispanic Ministry Conference Sept. 21.

Mar Muñoz-Visoso, executive director of the Secretariat of Cultural Diversity in the Church at the USCCB, said she had just returned from a Vatican visit with Pope Francis as part of a team reporting the outcome of the national V Encuentro led by Daniel Cardinal DiNardo, USCCB president and archbishop of Galveston-Houston, with USCCB vice-president Archbishop José H. Gomez, of Los Angeles. The delegation met with Pope Francis Sept. 20 to present him the proceedings and conclusions of the Fifth National Encuentro of Hispanic/Latino Ministry, held September 2018.

The Encuentro, or Encounter, is a series of regional and national gatherings for Hispanic Catholics to respond together to the call of the new evangelization as missionary disciples serving the entire Church.

“I’m wearing the same jacket now as when I met the pope. And after this conference, I’ll be traveling to El Paso to meet with immigrants. We are all members of the one Church,” Muñoz-Visoso said, reiterating the conference’s theme, “One Church, One Body: Strengthening Fraternal Bonds.”

“We must rise to the challenge and opportunity presented to us, especially after the massacre in El Paso, where fellow Hispanics and others lost their lives. As Catholics, as Christians, how do we speak to such action? With peace and unity. Even our U.S. motto, E Pluribus Unum, means, ‘out of many, one,’” she said.

The audience at the St. Dominic Chancery auditorium also came from across Archdiocesan parishes spread from The Woodlands to southeast Houston since more than 60% of overall parishioners in the Archdiocese are Hispanic.

Father Tom Smithson, pastor at Corpus Christi Catholic Church in southwest Houston, said, “We have a group attending here, so I also wanted to be here in support.”

Hispanic Ministry Director Lazaro Contreras said, “We are very grateful for all the people who attended. We had a flood two days prior that affected our city and neighboring cities. We did not know how people would respond and how many were affected by it, but despite that, people came out and participated. We are grateful to them, and we continue to pray for those impacted by the floodwaters.”

He added, “It was the first time we did the conference bilingually and with some of our workshops in English. Our hope for the future is to continue this type of conference and presentations that will help us nurture who we are as Hispanic/Latino Catholics and as missionary disciples serving the entire Church. Together we work in collaboration as members of a diverse body unified through love and faith in Christ.”

The conference discussed how Hispanics make up about 40% of the Church in the United States, with an especially large representation among youth and young adults: 50% of Catholics ages 14 to 29 are Hispanic, and 55% of Catholics under 14 are Hispanic.

Margaret Alarilla, who conducted her workshop in English on “Hispanic Spirituality and Catholicism in the 21st Century,” is an associate director of the Congar Institute for Ministry Development based in San Antonio.

Looking at changing demographics and social barriers, Alarilla said some Hispanic parents want churches to provide faith formation information in Spanish although their children also know English. Many times, young people also leave the Church once they have been confirmed and grow into adulthood, she said.

“Where are our young people going? Kids are saying, ‘I’m spiritual, but not religious.’ Or they say, ‘Mass is boring’ because they don’t understand the depth of it. They’re attracted to prosperity theology because it seems positive,” she said.

Alarilla ended her presentation saying, “The main question we must answer is, ‘Are we bridge people, Gente Puente, or wall-builders?”

Heidi Banegas, originally from El Salvador, attended the conference as part of her being a member of St. Thomas More Catholic Church off of Hillcroft.

“This is good to help me understand our differences and still work together,” she said.

In a second follow-up to her keynote, Muñoz-Visoso also talked about best practices for Catholic churches around the country with diverse populations. She recommended a manual available in English and Spanish through the usccb.org website called “Building Intercultural Competence for Ministers.”