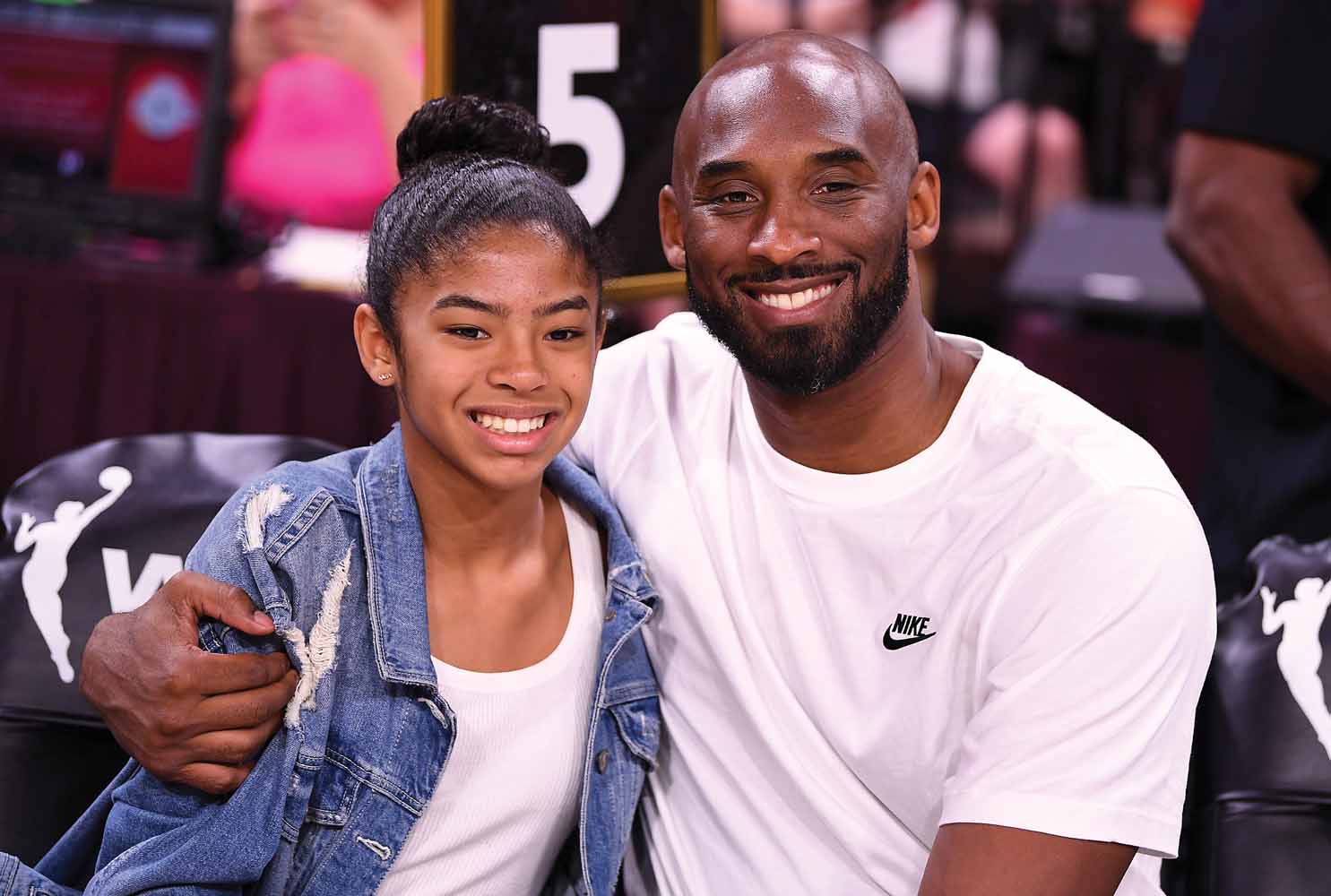 Retired NBA legend Kobe Bryant and his daughter Gianna, 13, were among nine people killed Jan. 26 in a helicopter crash in Calabasas, Calif. The two Catholics are pictured during a game in Las Vegas July 27, 2019. When Kobe was in Houston for Rockets games, he would attend Mass at Annunciation Catholic Church down Crawford Street from the Toyota Center. (CNS photo)

HOUSTON (CNS) — As the world mourned the loss of basketball great Kobe Bryant, his 13-year-old daughter Gianna and seven others killed in a tragic helicopter crash Jan. 26, many recalled how Bryant gave much credit to his Catholic faith for seeing him through the bad times and strengthening his marriage and family.

Monsignor James Golasinski, who was pastor of Annunciation Catholic Church from 1989 until 2013, recalled seeing Bryant at either the 8 a.m. or 9:30 a.m. Masses when the Los Angeles Lakers were in town to play the Houston Rockets.

“I would ask how his father was,” Monsignor Golansinski recalled, referring to former NBA player Joseph “Jellybean” Bryant, father of Bryant and former Houston Rockets player.

“I would say to him, ‘Tell your daddy Houston still remembers Jellybean,’” Monsignor Golansinski said.

A shooting guard, Bryant was drafted into the NBA at age 17 and played his entire 20-season career with the Los Angeles Lakers. He entered the NBA directly from high school and won five NBA championships. He retired at the end of the 2015-2016 season.

News of Bryant’s death quickly prompted tributes on social media. On Twitter, Archbishop Jose H. Gomez of Los Angeles said “he was sad to hear the news” and offered prayers for him and his family.

“I remember one time going to the Lakers’ practice, and I had a good conversation with him,” Archbishop Gomez told CNS. “We are praying for the eternal repose of his soul, his daughter who also died and for the family. It must be a very challenging time for his family. So, let’s pray for him and pray for his family.”

Born in Philadelphia Aug. 23, 1978, Bryant was raised a Catholic and as a youth lived for a while in Italy. He and his wife, Vanessa, married at St. Edward Catholic Church in Dana Point, California, and raised their children Catholic. Bryant is survived by his wife and three other daughters. Gianna, also known as “GiGi,” was the couple’s second-oldest daughter.

One of the darkest periods in his personal life happened in 2003 — when he was accused of raping a young woman while he was staying at a mountain resort hotel in Colorado; he was in the state for knee surgery and was staying near Vail in Eagle, Colorado. He was arrested on a rape charge.

He denied he had raped her but admitted that the two had consensual sex. The charges were eventually dropped. In 2004, his accuser filed a civil suit against him and in 2005 Bryant settled with her out of court for an undisclosed sum.

His marriage almost ended over it. In a GQ interview in 2015, he said he relied on his Catholic faith to get him through — and talking to a priest was “the turning point.”

“The one thing that really helped me during that process — I’m Catholic, I grew up Catholic, my kids are Catholic — was talking to a priest. It was actually kind of funny: He looks at me and says, ‘Did you do it?’ And I say, ‘Of course not.’ Then he asks, ‘Do you have a good lawyer?’ And I’m like, ‘Uh, yeah, he’s phenomenal.’ So then he just said, ‘Let it go. Move on. God’s not going to give you anything you can’t handle, and it’s in His hands now. This is something you can’t control. So let it go.’ And that was the turning point.”

Law enforcement officials identified the other passengers on the helicopter, who also perished: the pilot, Ara Zobayan; Former University of Houston baseball player John Altobelli, who was head baseball coach at Orange Coast College in Costa Mesa, California, his wife, Keri, and their daughter Alyssa; Christina Mauser, a basketball coach at Harbor Day School in Newport Beach, California, where Gianna Kobe attended school; and Sarah Chester and her daughter Payton, who was of middle school age.

USA Today reported the group was traveling in Bryant’s private helicopter, a Sikorsky S-76B, to the Mamba Sports Academy in Thousand Oaks, California, for a girls basketball game. Bryant was expected to coach and Gianna was expected to play. The crash occurred around 10 a.m. local time; law enforcement officials said there were foggy conditions in the hills overlooking Calabasas, which is in Los Angeles County.

Among tributes to Bryant flooding the internet was a remembrance by Instagram user Cristina Ballestero, who described seeing Bryant at a weekday Mass at Holy Family Cathedral in Orange, California.

She recalled looking up to see the basketball star sitting in her pew, but she managed to “stay focused on Jesus, not this insanely talented basketball player my whole family has looked up to and watched our whole lives.”

“As we went up to Communion, he waited for me to go,” she recalled, adding that he complimented her on having a “beautiful voice” in singing the Mass hymns.

“His most inspiring trait was his decision to turn to his faith in God and receive God’s mercy and to be a better man after a regretful decision,” Ballestero wrote, referring to the GQ article. “I am heartbroken at the news of his death alongside his daughter Gianna. My prayers go out to his family, friends and loved ones.”

She also noted all the good works Bryant and his wife Vanessa have done through their foundation and several other charities they are involved in and donate money to.

A tweet from Tommy Tighe at @theghissilent remembered seeing Bryant and his family at Our Lady Queen of Angels Church during Mass “and it’s something I’ve never forgotten.”

“May the crucified Christ and His sorrowful mother be with Kobe’s wife, daughters, and family,” Tighe tweeted.