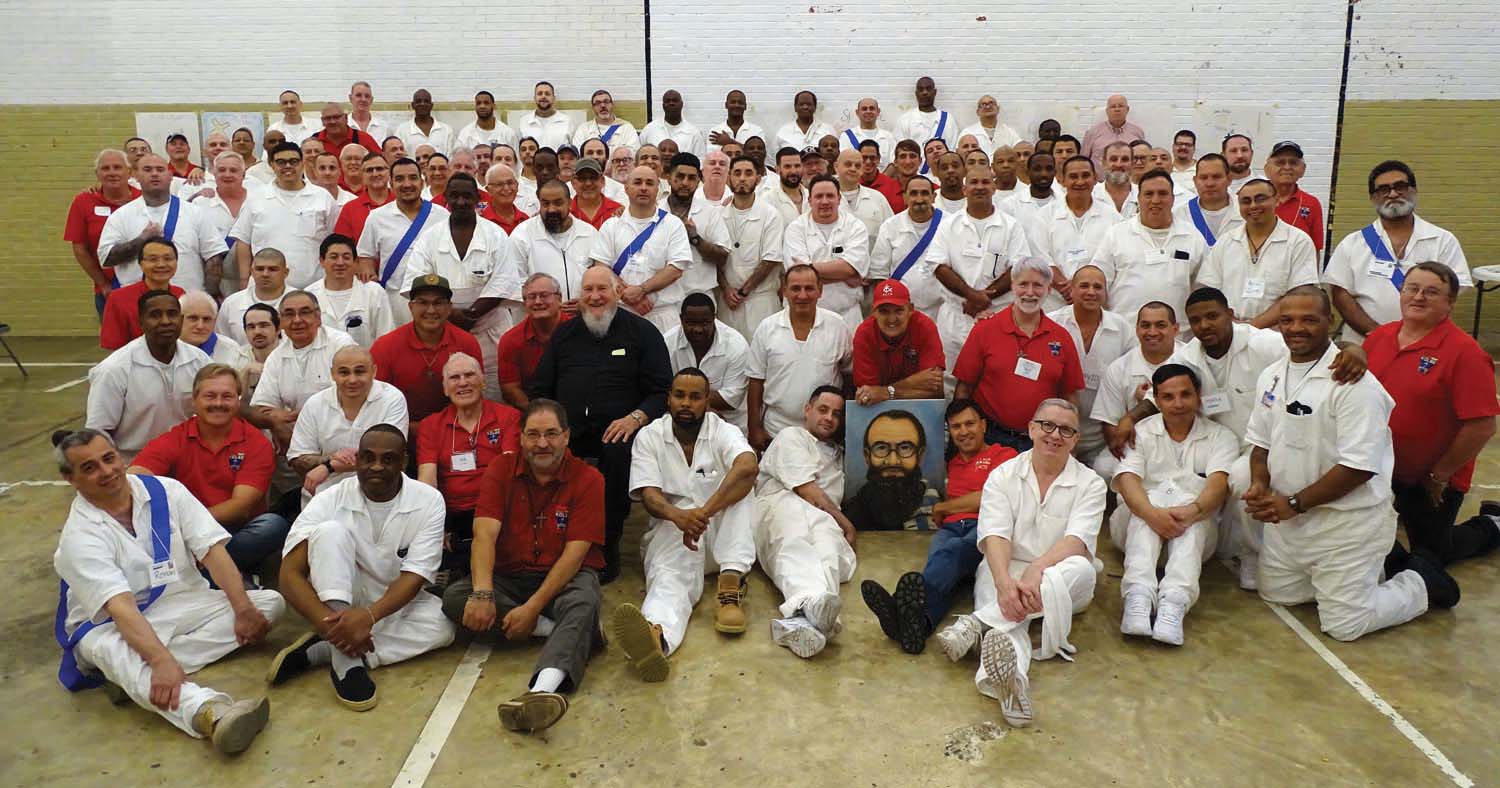 A group of incarcerated men and retreat leaders including clergy and laity are seen during a recent Kolbe Prison Retreat held in July at the Texas Department of Criminal Justice Wayne Scott Unit prison in Brazoria County. According to the Office of Correctional Ministries which helps to coordinate the retreats, 30 team members helped lead a retreat for 95 offenders. Below, David Cotto poses for a photo during the 2019 Kolbe Prison Ministries Statewide Conference in San Antonio July 20. Cotto, a former prisoner, credits Kolbe retreats for helping him find a turning point in his life.  (Photos by James Ramos/Herald and Office of Correctional Ministries)

HOUSTON — Crowding around a painted portrait of St. Maximilian Kolbe, the Polish friar who died in a German death camp during World War II, both prisoners and retreat leaders smiled for a group photo at a recent July retreat.

A longtime effort of both Kolbe Prison Ministries in the Archdiocese and the Office of Correctional Ministries, Kolbe prison retreats, named after the Polish martyr, offer incarcerated men and women the chance to experience God’s redemptive grace and mercy with a weekend featuring the Sacraments, small group sharing and more.

While David Cotto was serving one of the three sentences he’d been given after a crime-ridden youth, his mother died.
He struggled with the lack of forgiveness for himself. He blamed himself, his father, and grew intensely bitter about not being able to attend her funeral. In prison, he said he couldn’t cry, that macho culture prevented him from talking to anyone about his struggle with realizing he would never see his mother again.

Soon after, “God started putting people in my life that were part of the Church,” he said.

He attended a Kolbe retreat held at his Dilley, Texas, unit in south Texas and a “new door opened.” He saw “radiance” everywhere and he hungered for more. 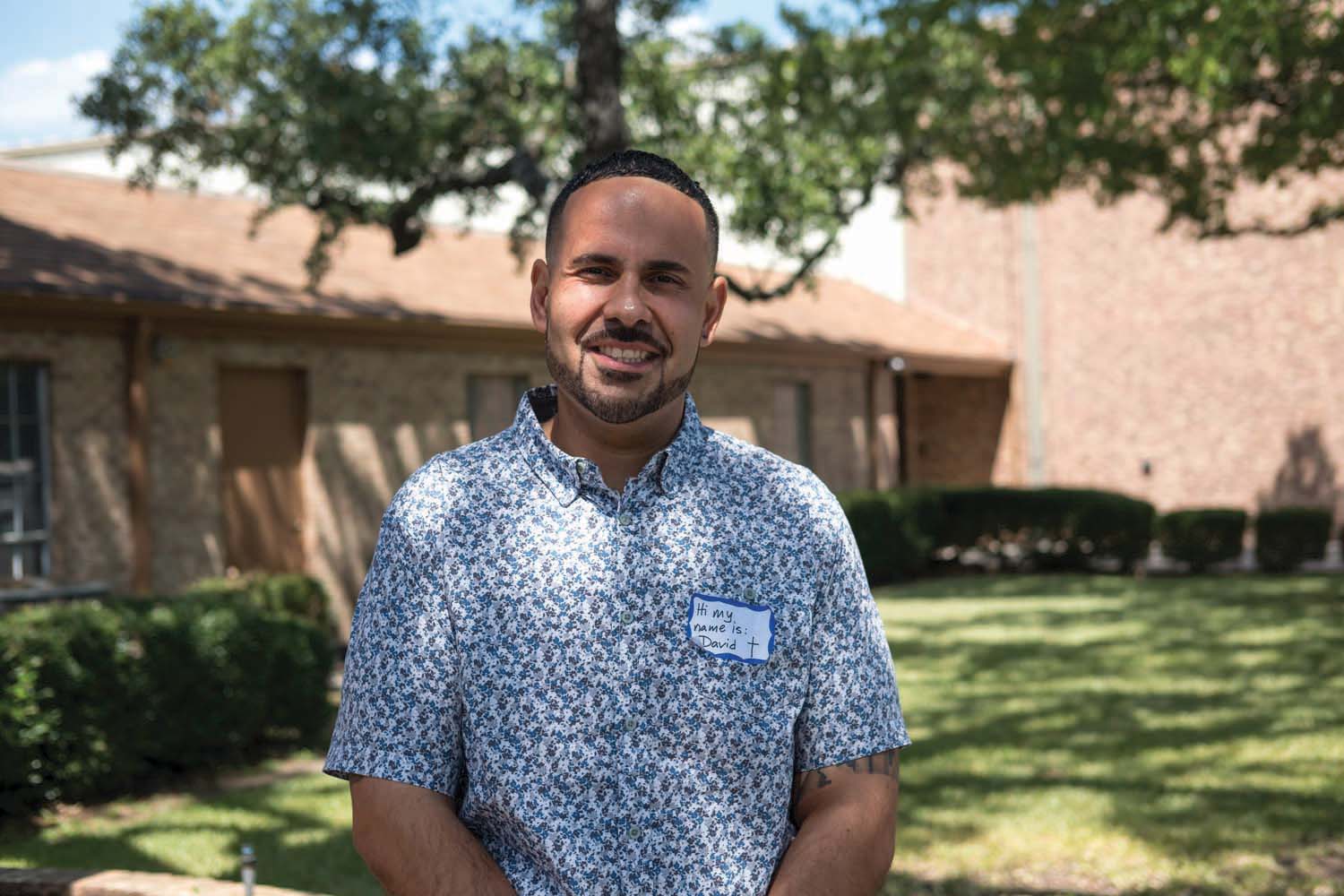 He said his journey was “amazing,” and because of his time in prison, he was able to “encounter Christ.” He found himself ready to “embrace” the experience.

“I wasn’t physically free, but I was spiritually free,” he said. It took him nearly eight years to get out of prison, but “it didn’t even bother me,” because he was “steady, focusing on God and His plan for his life.”

He realized that as he grew in his relationship with Christ, changing his own life was a struggle. He had been someone who was a gang member in and out of prison who was “completely selfish” who desired to be a “Christian brother” who wanted a whole new life, one that was changed to have “unconditional love” as Christ had for others.

Now out of prison and living in the Houston-area, Cotto said it took time, but he knew God was “already working it out” for him because he “tried to cooperate with that grace in prison.”

His conversion to the faith helped him to leave gang life behind.

He said his peers in prison had their doubts about his new Christian life, but as soon as they saw the authenticity behind his efforts, those who questioned him backed off and even asked questions, wanting to learn more about the Church.

He continues to write to his peers who are still in prison, several who are “laying down their flags for Christ” and embracing a Christian life.

Cotto joined four other former Texas inmates in sharing their testimonies about the significant impact Kolbe retreats have made on their lives.

In his address to the some 250 Kolbe Ministry leaders from nearly every diocese in Texas, Cotto said, “I’m just pieces of all of you put together.”

For Jerry Trzeciak, coordinator for the Kolbe Prison Ministries’ northern region, stories like Cotto’s are very familiar to the “hundredfold” that Trzeciak encounters within the prison walls.

He attended the statewide conference alongside other Galveston-Houston representatives. Trzeciak focuses on supporting those who minister to those incarcerated on the north side of Galveston-Houston’s region.

“We see this same type of impact that Christ has with those who are incarcerated for the rest of their natural life or might be in solitary administrative segregation,” he said. “God knows no boundaries.”

He admitted it’s a challenge to work with the systems and schedules held in place at the prisons. Still, he realizes that security is the number one goal in prisons.

Archdiocesan officials estimate that there are an estimated 1,500 to 1,600 incarcerated Catholics in Harris County jail alone, as well as those in the 26 state prison units, 10 county jails, a federal detention center and the many city jails within the 10-county Archdiocese.

The state’s execution chamber is housed in a unit in Huntsville.

218,500 were incarcerated in Texas prisons or local jails in December 2016, according to a 2018 report by the U.S. Bureau of Justice Statistics.

Trzeciak said those who work to minister inside the prisons “give it all to God.”

“It’s Him, not us,” he said. “We must always give thanks to our spouses and our significant others because without their support and with their love, it wouldn’t be possible.”

In his keynote address, Archbishop Garcia-Siller focused Pope Francis’ call for a “culture of encounter,” especially with those who are imprisoned.

Archbishop Garcia-Siller encouraged those in attendance to be like Jesus who walked with two disciples on the road to Emmaus.

“Through the outpouring of the Holy Spirit in your hearts, God continues to reach out for the most needy and the most forgotten,” Archbishop Garcia-Siller said. “Go forward with courage and hope to proclaim the love of God ... to those in prison and their families.”

Throughout many of his papal trips outside the Vatican, in addition to Holy Week celebrations, Pope Francis frequently visits with the incarcerated and prisons. He regularly celebrates Holy Thursday Mass with prisoners and became known for washing the feet of incarcerated in prisons near the Vatican.

“Prison,” he said, “With the help of prison workers, can truly become a place of redemption, resurrection and a change of life, and all this is possible through paths of faith, work and professional training, but especially of spiritual closeness and compassion.”