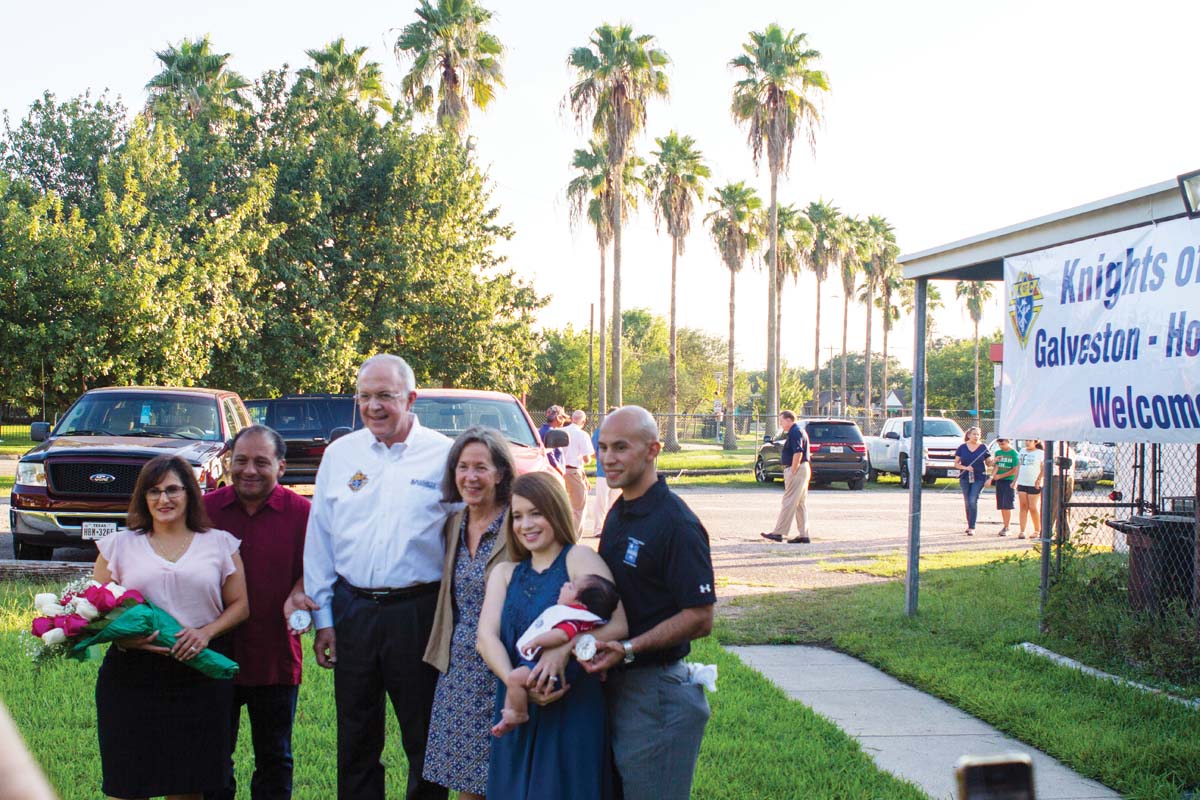 Supreme Knight Carl Anderson and his wife Dorian are seen with Army First Lieutenant Jacob Cortez (far right) and his wife and child and Paul Cortez and his wife, far left, and his wife after receiving the Knights of Columbus Caritas Award at Bishop Byrne Council 3077 in Houston Sept. 23. Photo by James Ramos/Herald

HOUSTON — Before the storm, Army First Lieutenant Jacob Cortez’s life was already changing: He and his wife had just welcomed the birth of their son, Gabriel, at a Houston hospital Aug. 22.

Then, about 48 hours after Gabriel’s birth, Hurricane Harvey slammed into the Texas Gulf Coast. The Category 4 storm dumped record rainfall — more than 50 inches in some parts of Houston — flooding thousands of streets, surging bayous and forcing rivers to burst past their banks.

At their home in southeast Houston, Cortez was watching the news with his recovering wife and his father, Paul, when they saw the alerts: Waters were quickly rising. A look outside their front door confirmed the same. Suddenly, people in the neighborhood were calling his father, a longtime member of the community, for help. Floodwaters had trapped dozens of neighbors in their homes.

In answer to their distress, Jacob and Paul, both members of Council 15321 at St. Frances Cabrini Catholic Church in southeast Houston, immediately took action.

Jacob quickly donned his uniform and joined his father on a rescue mission. Pushing through chest-deep water with a kayak in tow, the two Knights went house to house, shuttling stranded neighbors to the safety of their neighbor’s two-story home.

Jacob knew things were treacherous as the floors of homes began to break apart. The currents ran strong as water levels continuously rose, eventually reaching at least four feet on some streets.

He reached out to local first responders, helping with their rescue efforts as well. Jacob physically transported those they had rescued, as well as his own family, to the safety of a large fire truck headed for a nearby shelter. In the end, he and his father helped rescue 27 people as Harvey continued to drench Houston.

For these heroic acts of bravery, Supreme Knight Carl Anderson presented the Caritas Award to Paul and Jacob Cortez during a visit to Bishop Byrne Council 2077 in Houston Sept. 23. The award, named after the first principle of the Knights of Columbus, recognizes extraordinary works of charity and service, and bears the image of the Good Samaritan.

Jacob joins a growing number of young men in the Armed Forces who join the Knights of Columbus, according to Supreme Knight Anderson.

“They understand what sacrifice is, what service is,” he said. “They come off of active duty and they join the Knights and they find that band of brothers that go out into the community, their parish, and make a difference. That’s what we’re all about.”

Jacob, in receiving the award, said, “That’s just who we are — that’s who I am and who I was raised to be. If you see a problem, you’ve got to be a part of the solution.”

Surrounded by relief supplies and other items distributed to hurricane victims, including Rosaries and Bibles, he said “We knew we had the skills, training and opportunity to give back where people needed the help, and we were not going to not answer the call.”
Still, he sees a long road ahead for his own family and his community.

“We, as a family, have been affected severely,” he said. “The house I grew up in — it’s four feet less of everything. Everything four feet and below, all the memories have been swept away. It’s been hard to move things out... that meant so much.”

“I miss coming home,” he said. “Home is a place you can never replace. ...[home] provides that warmth. And now we come back to a construction zone. It’s a disaster area. I know it’s not home yet, but we’re blessed to know one day it will be.”

Supreme Knight Anderson echoed that courage for the future.

“The damage will take a long time to overcome,” he said. “But we’ll be here at the local level and the Supreme level. We’re a brotherhood moving forward.”

The supreme knight then called on the Galveston-Houston Knights to continue their relief efforts.

“You are really a witness to what charity, unity, fraternity — and to what being a Knight of Columbus — is all about,” he said. “The eyes of the country really are on Texas.”