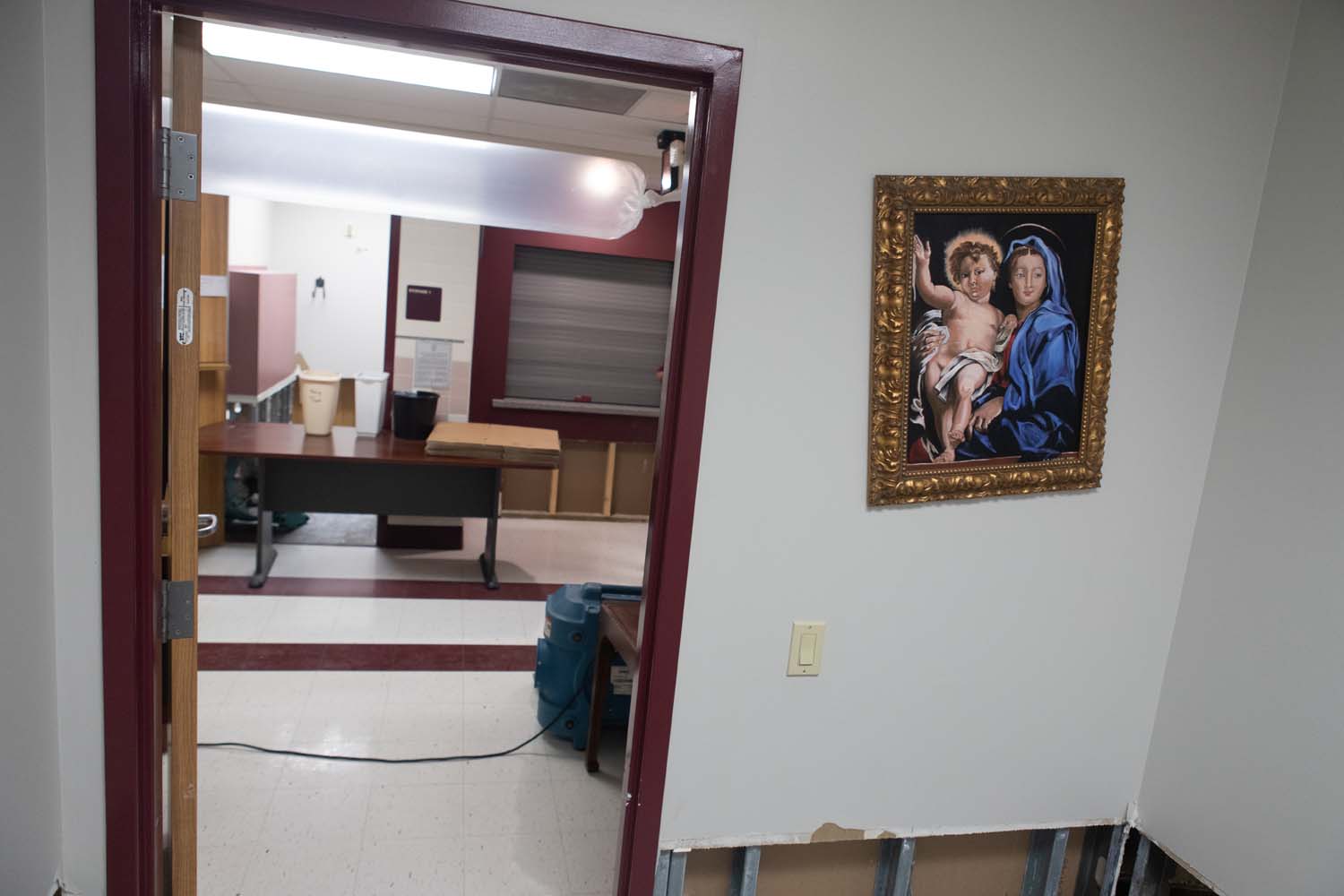 A painting of the Blessed Virgin Mary and the Child Jesus is seen tilted above demolished sheetrock walls during the renovation process after Tropical Storm Imelda pushed six inches of floodwaters into St. Martha Catholic School in Kingwood on Sept. 23. (Photo by James Ramos/Herald)

Five weeks into the new school year, with students finally back in renovated classrooms damaged by a flood this May, Tropical Storm Imelda brought catastrophic flooding and record breaking rainfall to the southeast Texas Gulf Coast, pushing six inches of floodwaters into two school buildings.

Father T.J. Dolce used Facebook Live to tell the St. Martha parish and school community he leads as pastor that the "incessant rain" had indeed flooded their school again.

Last time on May 7, it was just 4 inches. School was in session that day, forcing teachers and older students to help carry younger, more frightened children through rushing floodwaters to higher ground. This time, when Imelda dropped 24 to nearly 29 inches of rain in two days north of the school, the school was already closed due to the storm Sept. 19 so the campus was empty.

While the school didn't flood during Hurricane Harvey's wrath in 2017 -- much of the surrounding area was devastated -- this time "there was no chance that the school was spared," Father Dolce said in his video stream.

Photos posted by parish officials showed a bright pink Fisher-Price plastic chair floating on the glass-like floodwaters surface in a classroom, eerily hovering over a colorful rug with the alphabet soaked in several inches of water.

In a series of video streams, Father Dolce beckoned for prayers, and empathized with those who flooded that day because he knew what that "helpless" feeling was like, watching how the "rain keeps coming and the waters keep rising."

Still he focused on the strength of God in the community: "God is with us," Father Dolce said. "Always unshakable is the faith we have in the Lord and His love for us. ... We've been through high waters before, we're going to get through it again."

He said that the parish's emergency assistance services would reactivate, just as it had during Hurricane Harvey in 2017, and the last flood in May.

"We want to help as many people as we can," he said. By the afternoon of Sept. 19, at least two north Houston parishes opened as a shelter for flood evacuees.

A photo showed the water reaching the feet of an elevated statue of Jesus Christ that stands outside the school.

In Beaumont, videos on social media showed several feet of water slamming cars and 18-wheelers on Interstate 10 near the east Texas city with floodwaters splashing over tall concrete barriers, seemingly bringing the Gulf of Mexico onto the highway. High water shut down the main artery between Texas and Louisiana, snarling traffic for hours.

Members of the so-called "Cajun Navy," a group of civilian boat-owners who rescued Texans during Harvey, assisted again with water rescues in Houston and Beaumont during Imelda.

During the height of the storm, Jim "Mattress Mack" McIngvale, a parishioner at Assumption Catholic Church in Houston, opened one of his massive furniture stores to flood evacuees, just as he did during Harvey. He sent his own delivery trucks to assist with evacuations. Flooding also forced a Beaumont hospital to evacuate its patients.

All Beaumont Catholic schools closed Sept. 19 and 20 and the Beaumont Diocese's pastoral center also closed both days. By the afternoon of Sept. 20, at least one parish in Beaumont opened as a shelter. Four to 5 feet of water were reportedly inside Beaumont homes.

On Twitter, Beaumont's Bishop Curtis J. Guillory asked for prayers for southeast Texas. He said the diocese was contacting clergy and religious who possibly flooded. By the afternoon, he said some parish plants had taken on water, but exact details were still unknown.

In Houston, chancery offices at the Archdiocese of Galveston-Houston were closed Sept. 20. A roof collapsed at a major U.S. Postal Service distribution facility in Houston, injuring at least three.

Imelda made landfall near Freeport, with sustained 40-mph winds and gusts up to 47 mph. The storm moved slowly through Houston sagging south and then east, lashing Beaumont, Texas. It claimed at least two lives, one in Houston, another near Beaumont.

High water closed major freeways in Houston and Beaumont through Sept. 20, stalling hundreds of cars on many roads. I-10 near Houston remained closed Sept. 20, after barges broke loose during the flood, slamming into the highway's bridge.

More than 65,000 were without power during the storm. Airports in the region also were shut down. Hundreds of homes were flooded, and more than 2,100 high water rescues and evacuations were made, civic officials said.

According to the Houston National Weather Service, many of the same areas hardest hit by Harvey were again impacted by Imelda, primarily those in east Houston to Liberty, Chambers and Jefferson counties near Beaumont.

At one point, Houston saw more than 1,000 lightning strikes in 10 minutes, experts said. Texas Gov. Greg Abbott declared a state of disaster for 13 counties. When more than 43 inches of rain fell near Beaumont, the storm became the seventh wettest tropical cyclone in U.S. history, fourth wettest ever to hit Texas.

A prayer posted to the Beaumont Diocese's website said the memories of "past tragedies" like Harvey "are still so vivid." It called for the intercession of Mary, Star of the Sea to help with "wounds (that) seem to refuse to heal."