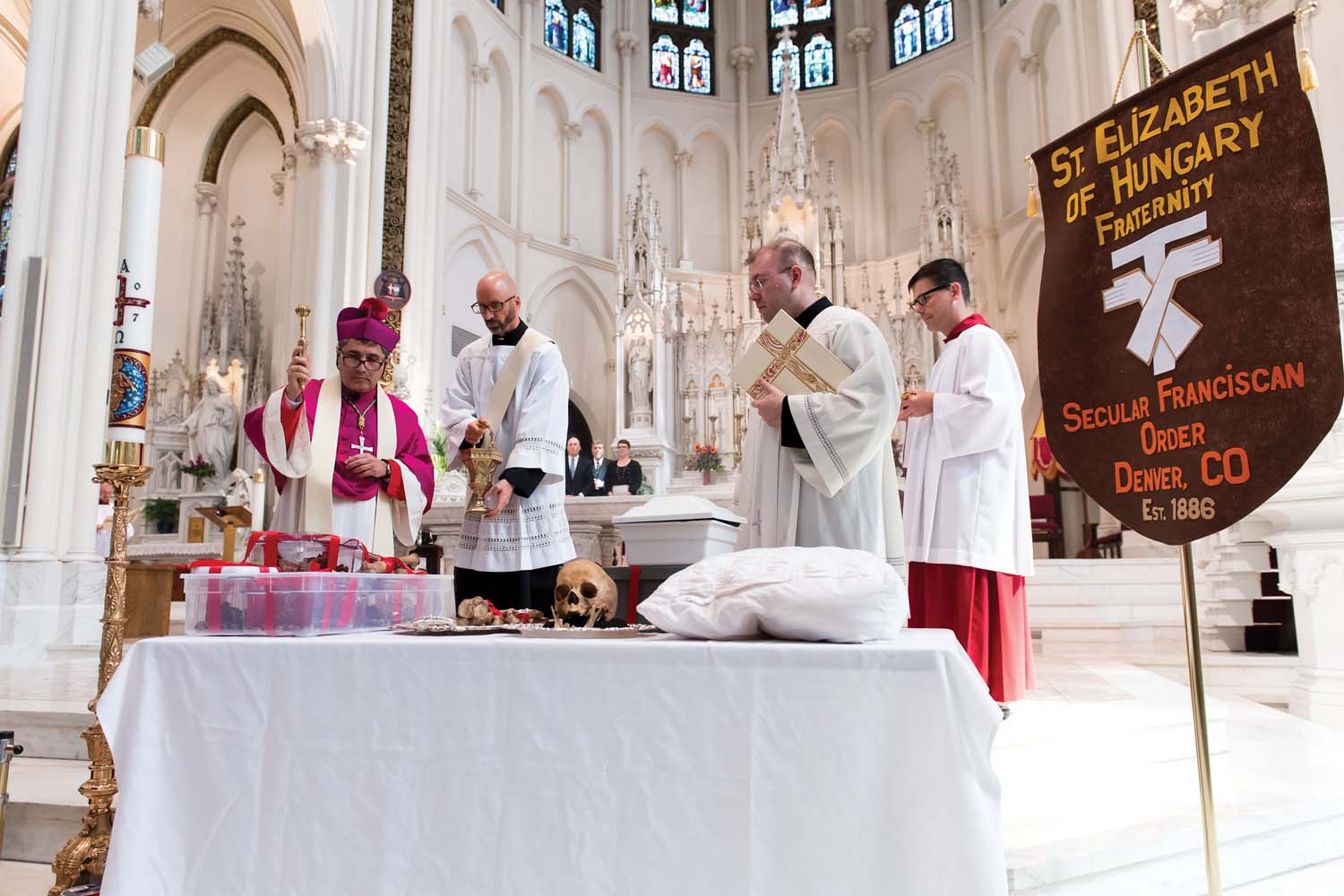 Denver Auxiliary Bishop Jorge Rodriguez presides over the Transfer of the Remains Ceremony for Servant of God Julia Greeley at the Cathedral Basilica of the Immaculate Conception on June 7 in Denver, Colorado. Photos by Anya Semenoff/Denver Catholic.

HOUSTON — Julia Greeley was a pioneer for Catholics. Black Catholics cling to her story as a model of loving kindness in the face of cruelty and oppression that resonates with people of all races, times and cultures.

In this National Black Catholic History Month, Mary L. Leisring, director of the Office of Black Catholic Ministry in the Archdiocese of Denver, gives a thoughtful reflection on the life of simplicity lived by Julia Greeley, whose kindness has inspired the start of her cause for canonization.

Greeley was born into slavery in Hannibal, Missouri on a date still to be determined, sometime between 1833 and 1848. After she was freed by Missouri’s Emancipation Act in 1865, Greeley worked by serving white families in Missouri, Colorado, Wyoming and New Mexico. She stayed mostly in the Denver area, which later garnered Greeley the name of Denver’s Angel of Charity.

She became Catholic at the Sacred Heart Parish in Denver in 1880, which was run by the Jesuits. Her devotion to the Sacred Heart of Jesus, the Blessed Sacrament and the Blessed Virgin knew no bounds. She was with the Secular Franciscan Order from 1901 until her death in 1918.

While first buried in Mt. Olivet Cemetery, her consideration for canonization was opened in December 2016, and on June 7, 2017 her mortal remains were moved to Denver’s Cathedral Basilica of the Immaculate Conception. Greeley is the first non-cleric and layperson to be buried at the Cathedral.

Leisring, the president of the Julia Greeley Guild, which began in 2011, was born and grew up in Houston. Leisring’s goal is to spread the story and the life of Greeley far and wide.

“At a time when racial prejudice was very strong, Julia kept on being faithful in her commitment to practicing her faith and helping people,” she said. “Julia Greeley was known for pulling a little red wagon full of provisions for people in need. She could be seen on streets or alleys taking food, clothing, or coal to help feed the hungry or keep them warm.”

Leisring has several stories that highlight the charity of Greeley in simple ways that made a big impact for the poor.

“Her charity was always very considerate,” Leisring said. “She saw that poor girls did not attend parties because they did not have a nice dress to wear. She would beg for dresses from the well-to-do families or fashionable girls’ schools to give to girls to wear. She would then inform the donor as to how beautiful the young ladies were.”

Leisring’s favorite story of Greeley has to do with how she was always surrounded by children.

“Julia was well liked by children,” she said. “She would sometimes take a group of them to city park for a picnic and they would take a trolley car for the ride to the outing. Julia liked to tell the conductor that these were all her children.”

Madeline Johnson, producer for the Office of Radio Ministry in the Archdiocese, stumbled upon Greeley’s story and has built a lasting connection with it. She and Leisring attended St. Nicholas Catholic School in Houston together.

“My 10th grade teacher turned 100 years old this August, so I looked for anything about the centennial to connect with her,” Johnson said. “I found that the 100th anniversary of Julia Greeley’s death was coming up in 2018. I was fascinated by her story.”

Johnson, who approached the Herald with the story idea, said one thing that attracted her to Greeley’s story is that she was so mistreated and came out on top. Even when Greeley was a young child, a cruel slavemaster was beating her mother with a whip and destroyed young Greeley’s right eye. Johnson also values Greeley’s dedication to sharing the message of the Sacred Heart. Every month Greeley would visit every fire station in Denver to deliver pamphlets of the Sacred Heart League to the firemen.

“This is history and every single one of us has a connection to it,” Johnson said. “Some of us will never know a whip, but we’re still mistreated because people say things about us and hurt us. For black Catholics to be at a time now to express ourselves and be accepted in the Church is a big deal. When you stop and think about this connection with our heritage and see that it is Catholic, it’s so beautiful.”

All of these stories about Greeley and many more are compiled in the book, “In Secret Service of the Sacred Heart: The Life and Virtues of Julia Greeley.”

“Father Blaine Burkey, O.F.M.Cap., has done an exceptional work in gathering the material in his book,” Leisring said. “In very thorough research, he has assembled the facts from very reliable sources and eye witnesses. The documentation of his work made the review of Julia’s life story very credible.”

Greeley’s life proves to be one of love, charity and devotion. She is a model of Christian virtue for the past, present and future. For more information on Greeley and details about the book, visit www.juliagreeley.org.