ISS, can you hear me? Popes link Church’s ties to science, research 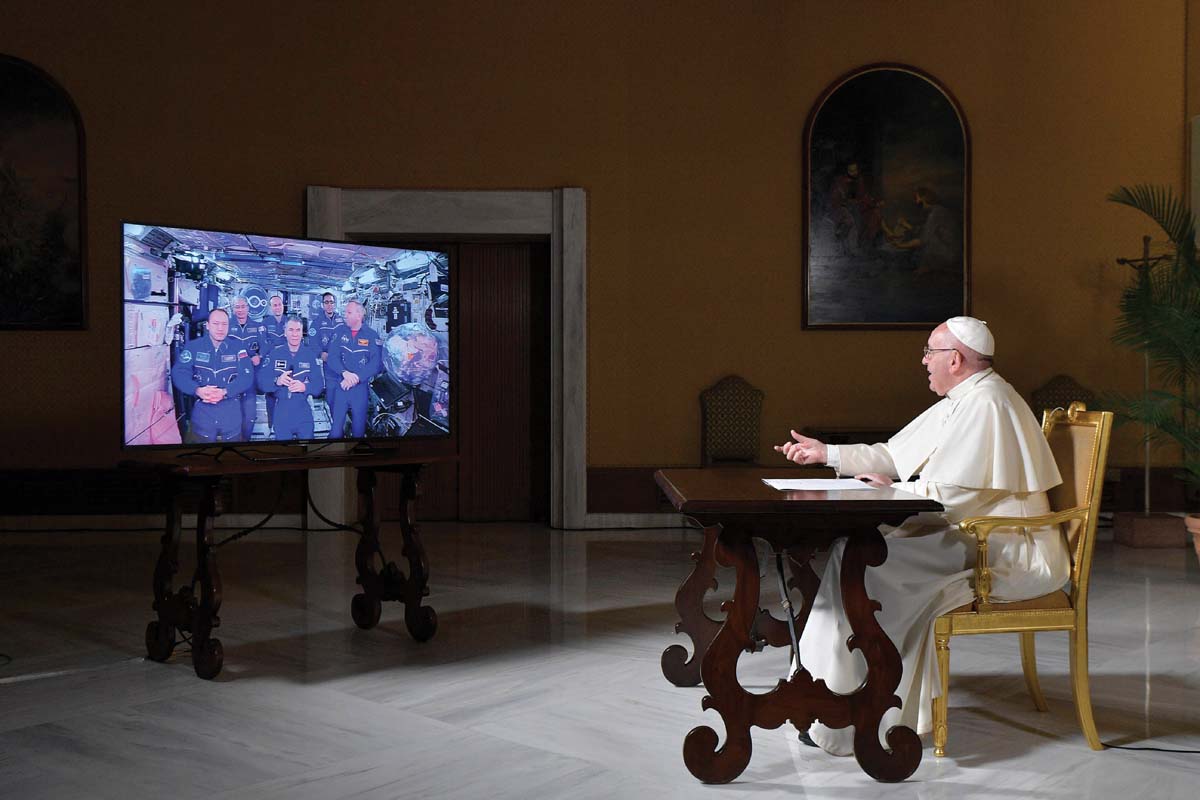 Pope Francis speaks from the Vatican to astronauts aboard the International Space Station Oct. 26, 2017. The pope connected for about 25 minutes to astronauts 250 miles above the earth. (CNS photo.)

HOUSTON — Twice Daniel Cardinal DiNardo has made the trip down to NASA Johnson Space Center to view a live satellite link call with astronauts aboard the International Space Station.

In 2011, Cardinal DiNardo was invited by NASA as part of a delegation of 40 others from the Archdiocese to visit Mission Control to witness a historic conversation between then-Pope Benedict XVI and the astronauts.

The pope asked them how their unique perspective from the frontier of the universe makes them think about difficult questions back on earth.

Charles Bolden, then-NASA administrator, and Mike Coats, then-director of the space center, welcomed the Catholic group prior to the 20-minute dialogue between the pope and the astronauts.

“The Archdiocese of Galveston-Houston has a special appreciation for all the people who work in the space program,” Cardinal DiNardo said at the time. “Their efforts have contributed to the advancement of our city, nation and world. As the space shuttle program comes to a close, the archdiocese is appreciative of the opportunity to join our Holy Father in commending the tireless work of NASA employees and affirming, as St. Paul says, ‘Christ fills all the heavens.’ May God bless all those who work for NASA for helping us learn more about the wonders of our universe.”

In a video hookup May 21 between the Vatican and the International Space Station (ISS) in orbit around the earth, Pope Benedict asked the astronauts how science can help in the pursuit of peace and the need to protect a fragile planet.
Seated at a desk in front of a video screen, Pope Benedict could see the 12 astronauts huddled before the camera and trying not to float away from lack of gravity inside the super technological space station. The group included space station crew and members of the final mission of the U.S. shuttle Endeavour.

The pope praised the space travelers for their courage and commitment, and reminded them that after their extraordinary experience, they “must eventually come back down to earth like all the rest of us.”

Six years later, Cardinal DiNardo, this time with Auxiliary Bishop George A. Sheltz, would return to Mission Control to view a live discussion between Pope Francis and Catholic astronaut Mark Vande Hei. Vande Hei, of Falls Church, Virginia, requested a call from Pope Francis, and Oct. 26, 2017 his wish upon a star came true.

The pope linked up live from the Vatican with the six-man crew as they orbited 250 miles above Earth.

Cardinal DiNardo was on the floor of Mission Control when Pope Francis made contact with those aboard the ISS.
Bishop Sheltz, priests from regional Catholic churches near JSC, members of chancery leadership and supporters of the Archdiocese of Galveston-Houston were also present in the adjacent Mission Control viewing room.

“Good morning, good evening,” Pope Francis told the crew at 3 p.m. Rome time “because when you are in space, you never know” what the real time is.

During their 20-minute link-up, Pope Francis asked five questions about how their unique perspective from the frontier of the universe has changed or enriched them and what lessons they could share with people back on Earth.

Saying society today is very individualistic, but what is needed is collaboration, he asked them how the ISS is an example of that collaboration.

Flight engineer Joseph Acaba of Inglewood, California, said it is the diversity of each individual that makes the team stronger.

“We need to embrace who we are as individuals and respect those around us, and by working together we can do things much greater than we could do as individuals,” he told the pope.

Pope Francis said they were like a tiny United Nations, in which the whole was greater than the sum of its parts. Thanking them for their work, he said they were “representatives of the whole human family” working on such an important project in space.

When the pope asked what brought them joy during their long mission, Commander Randolph Bresnik from Fort Knox, Kentucky, told the pope that it was being able to see every day “God’s creation maybe a little bit from his perspective.”
Bresnik, a Baptist, said, “People cannot come up here and see the indescribable beauty of our earth and not be touched in their souls.” His fellow crewmembers were also Christians: two Russian Orthodox and three Catholics.

“We see the peace and serenity of our planet as it goes around 10 kilometers (six miles) a second, and there are no borders, there is no conflict, it’s just peaceful,” Bresnik said. “And you see the thinness of the atmosphere and it makes you realize how fragile our existence here is.”

The commander said he hoped the beautiful images they capture from space and their example as international crewmembers successfully working together would be an inspiration and a model for the rest of the world.

The pope said he was struck by Bresnik’s awareness of the fragility of the earth and humanity’s capacity to destroy it, but also the hope and inspiration the astronauts could feel.

When asked by the pope what has surprised them most about living in the ISS, Vande Hei said it was how differently things looked from such a unique perspective. He said it was also “unsettling” to be in constant rotation and have to orient himself by deciding himself what was “up” or “down.”

“This is truly a human thing — the ability to decide,” the pope replied.

When asked what made them want to become astronauts, Russian flight engineer Sergey Ryazanskiy said his grandfather was his biggest inspiration because he had been the chief engineer on the Soviet team that built Sputnik, the first artificial satellite successfully launched into earth’s orbit. “So for me, it is a great honor to continue what he was doing to fulfill his dreams,” said Ryazanskiy.

After Pope Francis asked for their thoughts about Dante Alighieri’s verse in the Divine Comedy that love was the force that “moves the sun and the stars,” Russian flight engineer Alexander Misurkin said only love gives you the strength to give yourself for others.

Italian astronaut Paolo Nespoli said he hoped that someday people like the pope, “not just engineers, physicists,” but poets, theologians, philosophers and writers “can come here to space, which will certainly be (the case) in the future, I would like for them to be able to come here to explore what it means to have a human being in space.”

Nespoli was present on the ISS for both calls. Among the small number of personal possessions the devout Catholic is allowed onboard, he keeps a prayer card of St. Padre Pio and an olive branch he received from Pope Francis as a reminder of the importance of taking care of earth “our common home.”