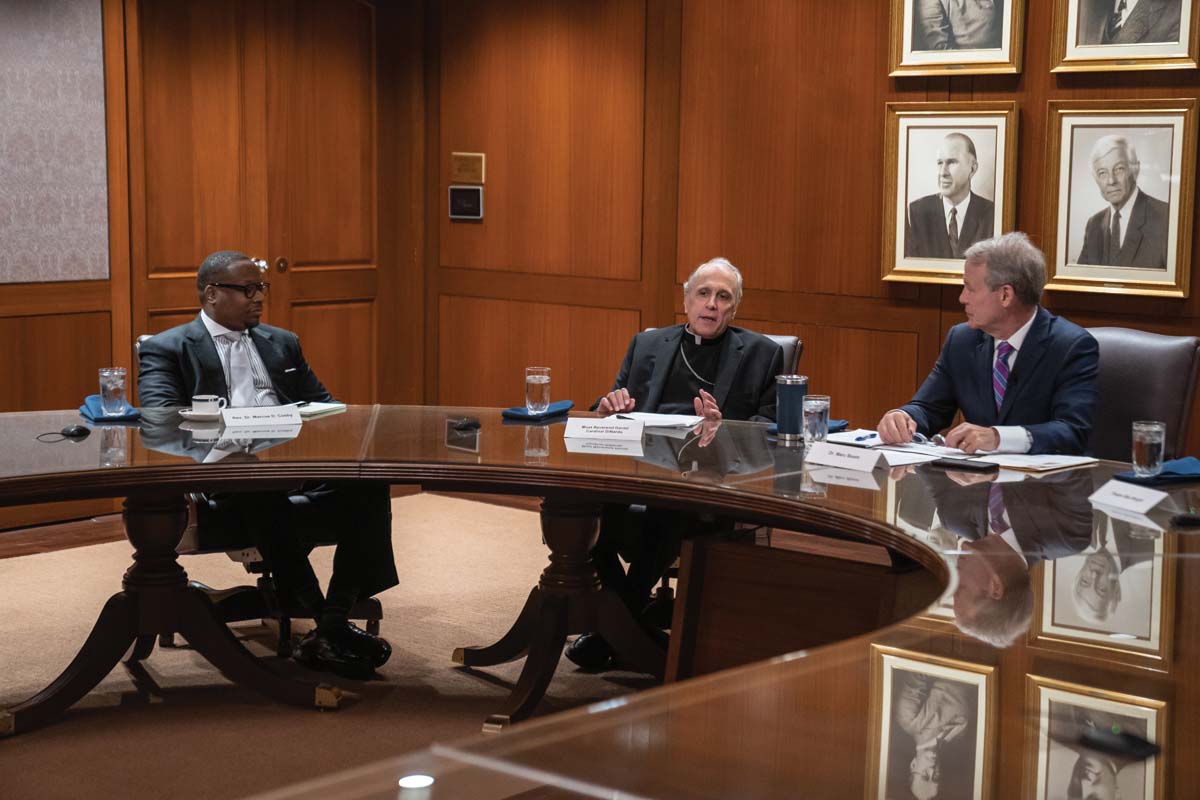 
HOUSTON — Christian, Jewish and Muslim leaders met for an in-person interfaith roundtable discussion on June 2 about how faith supports people in the pandemic and plays an important role in building vaccine trust.

Daniel Cardinal DiNardo, among those meeting with Marc Boom, MD, president and CEO at Houston Methodist Hospital, said more than 150 local Catholic churches over 10 counties had to shut down within five days of the public health crisis announcement 15 months ago.

“We were trying to be inventive in the midst of chaos,” Cardinal DiNardo said of efforts to livestream Masses in English, Spanish, Vietnamese and other languages, as well as create virtual events for more than one million Catholics locally.

Churches are also hosting COVID-19 vaccine clinics partnering with nonprofit medical entities for parishioners and surrounding communities while the majority of priests have been vaccinated as role models, he said.

Bishop Scott Jones of the Texas Annual Conference of the United Methodist Church said some pastors “felt endangered” because of “rebellious congregants refusing to wear masks.” But their online ministering was so successful that some churches tripled in membership with Florida residents joining a Texas congregation and Aggies living in Michigan connecting back to their old home churches, Bishop Jones said.

Churches, synagogues, mosques and other houses of worship are opening up again with in-person services now that more than 50% of Texans older than 16 have received at least one dose of a COVID-19 vaccine, according to state statistics.

Imam Tauqeer Shah, director of outreach and interfaith with the Islamic Society of Greater Houston, said after receiving word last year in March that all public gatherings in person had to shut down, their traditional prayers while standing shoulder to shoulder in mosques had to stop.

“We had some orthodox question, ‘Do you not think God would take care of you?’” he said.

But after consulting with Muslim leaders in the medical field, the mosques shut down completely and tried to switch as quickly as possible to virtual events online.

“Now that they are used to it, the problem is trying to get them to come back,” Shah said of members. “Now the question is, ‘Are you having that event virtual too?’”

Pastor Mia Wright, co-pastor and executive director of ministry for The Fountain of Praise, and Senior Pastor Marcus Cosby of Wheeler Avenue Baptist Church — both with majority African-American congregations — said they also had the challenge of convincing members that they needed the vaccines in light of historical negative medical experiments on black patients.

“Many thought the pandemic restrictions would be short-term. But then fear turned into fatigue — ‘we’re tired of this, let’s go back to normal.’ Then fatigue turned into folly, and we had the surge,” Reverend Cosby said.

Pastor Wright added, “We really had to teach people how to log on and how to find our services. While some seniors caught on very quickly, it was challenging for those with no Facebook or YouTube access. Everyone had to pivot. If people wanted fellowship, they had to adapt.”

“Many were not able to work from home. We had families literally starving, and we helped with food, especially baby food, disposable diapers and other needs,” Pastor Cadar said.

Reverend Greg Han, a Presbyterian minister and director of Interfaith Ministries for Greater Houston, said, in delivering and serving food to those in need, “We had to reposition our ‘Meals on Wheels’ program, keeping it safe and socially distant.”

Reverend Han said diverse religious communities have come to realize “the spiritual reality that we are all connected, and we all share a common bond. We have all shared struggles, loss and grief — burdens that we share together even as we were physically distant, but still socially connected.”

Rabbi David Lyon, senior rabbi of Congregation Beth Israel, said they already had been livestreaming their services for years before the pandemic, “but I have not been able to go to hospitals” to visit the sick and dying.

“Our clergy team members have had to dig deep to keep faith strong,” Rabbi Lyon said.

Sharing a pandemic tragedy replayed too many times, Rabbi Lyon told of a family standing outside a glass window looking into the hospital room where their father lay dying. He said, “There is no question that there was love in the absence of touch.”