‘In the light of truth’: Texas dioceses join Galveston-Houston in naming clergy with credible allegations of sex abuse 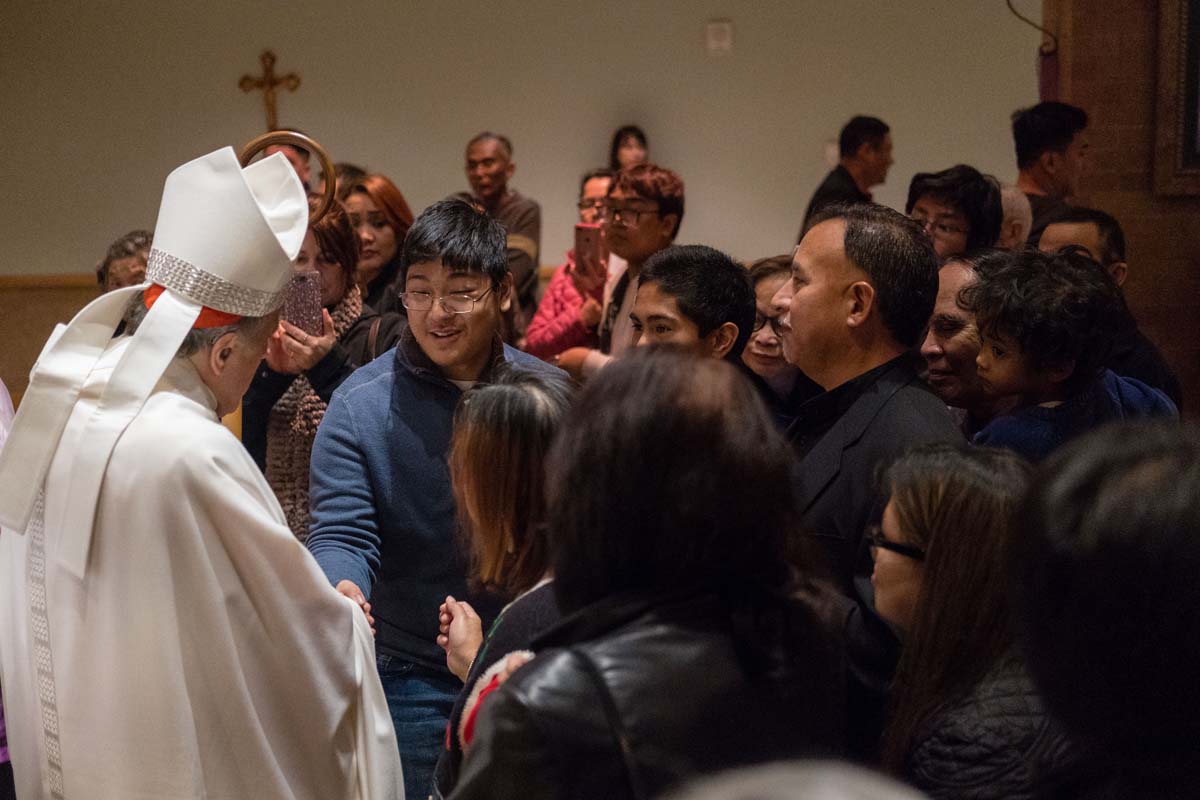 Daniel Cardinal DiNardo greets a young man after a recent Mass at St. Ignatius Catholic Church in Spring. On Jan. 31, the Texas bishops of the 14 other diocese in Texas joined Cardinal DiNardo in a state-wide disclosure of the names of clergy credibly accused of sexual abuse of minors. Photo by James Ramos/Herald.

HOUSTON — In a step to restore trust in the Catholic Church, with the 14 other Catholic dioceses in Texas, the Archdiocese of Galveston-Houston released its lists of priests against whom credible allegations of sexual abuse of a minor have been determined.

The 15 dioceses disclosed Jan. 31 the names of 278 individual clerics who have such credible allegations in Texas. The statewide disclosure removed duplication of clerics who appear on multiple diocesan lists. The list is also available online at www.archgh.org.

Daniel Cardinal DiNardo, archbishop of Galveston-Houston and president of the U.S. Conference of Catholic Bishops (USCCB), extended his “deepest regret for the harm that has been done,” a sentiment echoed by bishops interviewed.

“In multiple incidents over the years, the Church and her ministers failed to protect the most vulnerable souls entrusted to our care,” Cardinal DiNardo said in his letter to the Catholic faithful of the Archdiocese.

“There is no excuse for the actions of those credibly accused of such sins against the human person,” he continued. “Even in darkness, our hope is in the Lord. We pray that God will remake us evermore in His image so that in the light of truth we may make Him known through our actions, words and deeds.”

Archbishop Gustavo Garcia-Siller of San Antonio repeatedly called the release “the just and right thing to do,” and that it is a “move forward in building a healthier community, a healthier society.”

The lists were compiled separately by each individual diocese. Many dioceses worked in cooperation with diocesan lay review boards, with some also working with independent consultants.

The oldest diocese is Galveston-Houston, established in 1847, with San Antonio founded next in 1874. Since 1950 nine additional dioceses have been established, resulting in a total of 15 dioceses. Laredo is the most recent to be established, that being in 2000. The Diocese of Fort Worth, which made public its list in 2007, has continued to update its disclosure on its website.

Each diocese worked with the general understanding that a “credible allegation” is one that, after reviewing reasonably available and relevant information, and in consultation with diocesan lay review boards and/or other professionals, the diocese has reason to believe is true.

While each diocese prepared its list independently, Archbishop Garcia-Siller said the goal of releasing the lists on the same day was significant and was done in consideration of all those affected by the abuse including abuse survivors, family members, friends and parishioners.

"When survivors see these names, it hurts them," Archbishop Garcia-Siller said.

He emphasized how each diocese remains committed to supporting and working with survivors and others affected by clergy abuse through a victim assistance coordinator. The Church offers psychological and pastoral services through the coordinators to aid in the healing process, he said.

The archbishop recognized Pope Francis' call for accompaniment, or walking with those within and outside of the Church, especially clergy abuse survivors.

“We need to let other voices help us, and that is accompaniment. It needs to be something alive, it is not just a check mark. We need to hear the voices and see how we can better serve the people,” Archbishop Garcia-Siller said.

“Accompaniment doesn't end with listening. We must embrace the recommendations ... and always be open about the relationship with victims and survivors. We must be vigilant and work toward a change in the culture and in the dominant culture,” he said.

Cardinal DiNardo agreed, writing in his letter that it was his “sincere hope” that the list would be “a step forward to healing for those who have suffered in the wake of such actions.”

“We humbly pledge to accompany them on that journey to wholeness and pray that God may bring them an awareness of his loving compassion,” he continued.

There are more than 8.5 million Catholics in Texas, and more than 1,320 parishes in the 15 dioceses.
The list includes religious order and diocesan priests. All dioceses will separately list deacons who have been named in credible allegations of sexual abuse against a minor, with some disclosed Jan. 31 and others pledging to do so later this year.

The dioceses used 1950 as the starting point for its lists to be consistent with the 2004 study by the John Jay College of Criminal Justice of the City University of New York that surveyed the nature and scope of the sexual abuse of minors by Catholic priests and deacons. The study covered the period of 1950 to 2002.

The Personal Ordinariate of the Chair of St. Peter, which was founded in 2012 and has its chancery in Houston, joined the 15 dioceses in the release of credibly accused clergy. While it had not received any allegations of clergy abuse of a minor, the ordinariate said in a statement it would publicly disclose names should any credible allegations be received.

Several dioceses were participating in spiritual events to pray and act toward the healing of clergy abuse survivors.

In San Antonio, priests and deacons led a special prayer at every Mass in its 139 parishes the weekend of Feb. 2 to 3 for the “healing of the wounds of sexual abuse.” Priests and deacons renewed their commitments to God and the Church during the prayer.

Bishop Mark J. Seitz of El Paso prepared to celebrate a Mass of Atonement Jan. 31 in St. Patrick Cathedral. In Austin, Bishop Joe S. Vasquez earlier called for a Year of Reparation that began All Saints' Day, Nov. 1. As a prelude, every parish in the diocese celebrated a Mass of Reparation Oct. 8.

An Archdiocesan-wide praying of the Rosary occurred Jan. 31 in Galveston-Houston for healing in the Church and victims of clergy abuse. Father Richard McNeillie, director of vocations, led the Rosary as it was livestreamed online.

Father McNeillie prayed “That God the Merciful Father will bring comfort and healing to victims and survivors of sexual abuse within the Church. May those who have been abused experience Christ’s profound love for them and God’s healing grace.”

In addition, numerous parishes have held prayer services, town hall meetings and other gatherings throughout Texas and across the nation in an effort to confront the abuse crisis with prayer and action.

The Jan. 31 release comes weeks before Pope Francis convenes a gathering of leaders of the world's bishops' conferences Feb. 21 to 24 at the Vatican, which Cardinal DiNardo, as USCCB president, will attend.