‘In Spirit and Truth’: Nearly 500 confirmed on the Feast of the Baptism of the Lord 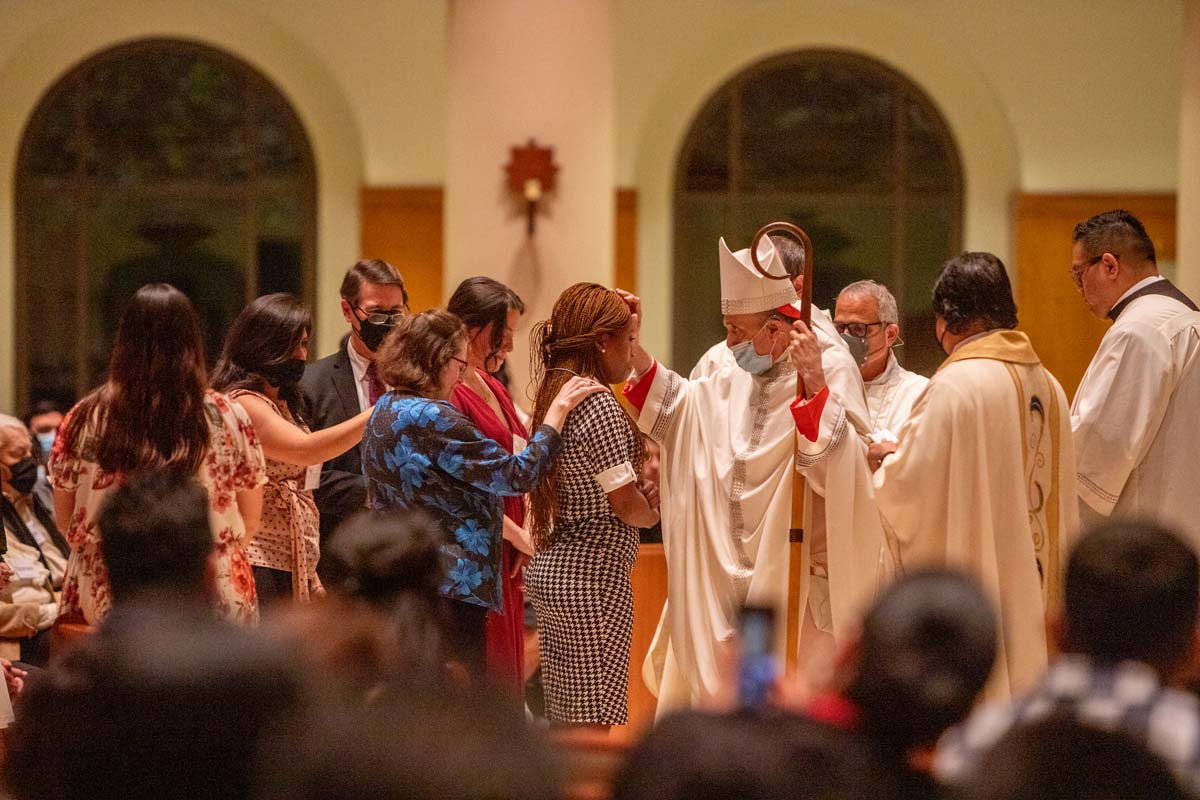 Daniel Cardinal DiNardo anoints the head of a confirmation candidate during a celebration of the Sacrament of Confirmation at a Mass at St. Martha Catholic Church in Kingwood on Jan. 9, the Feast of the Baptism of the Lord. Cardinal DiNardo, with Auxiliary Bishop Italo Dell’Oro, confirmed nearly 500 Catholics on Jan. 9 at four Masses around the Archdiocese. (Photos by James Ramos/Herald)

KINGWOOD — “Be sealed with the Gift of the Holy Spirit,” Daniel Cardinal DiNardo said, leaning forward to greet a bespectacled man in a green long sleeve while anointing him with chrism on his forehead.
A few moments later, he repeated but in Spanish: “Recibe por esta señal el Don del Espíritu Santo,” again lifting his thumb to anoint a smiling woman dressed in white.

Since it was the Feast of the Baptism of the Lord, Christmas trees still sparkled behind him in the sanctuary of St. Martha Catholic Church in Kingwood.

Nearly 500 Catholics from 59 parishes across the Archdiocese received the Sacrament of Confirmation when Cardinal DiNardo and Auxiliary Bishop Italo Dell’Oro celebrated four separate Masses on Jan. 9.

These four Masses, where Cardinal DiNardo and Bishop Dell’Oro anointed the foreheads of the candidates with holy chrism in an intimate one-on-one moment with a Catholic and his or her bishop, signaled the culmination of months of catechesis and effort, alongside their sponsors who helped guide them in the process, at their parishes and lives. 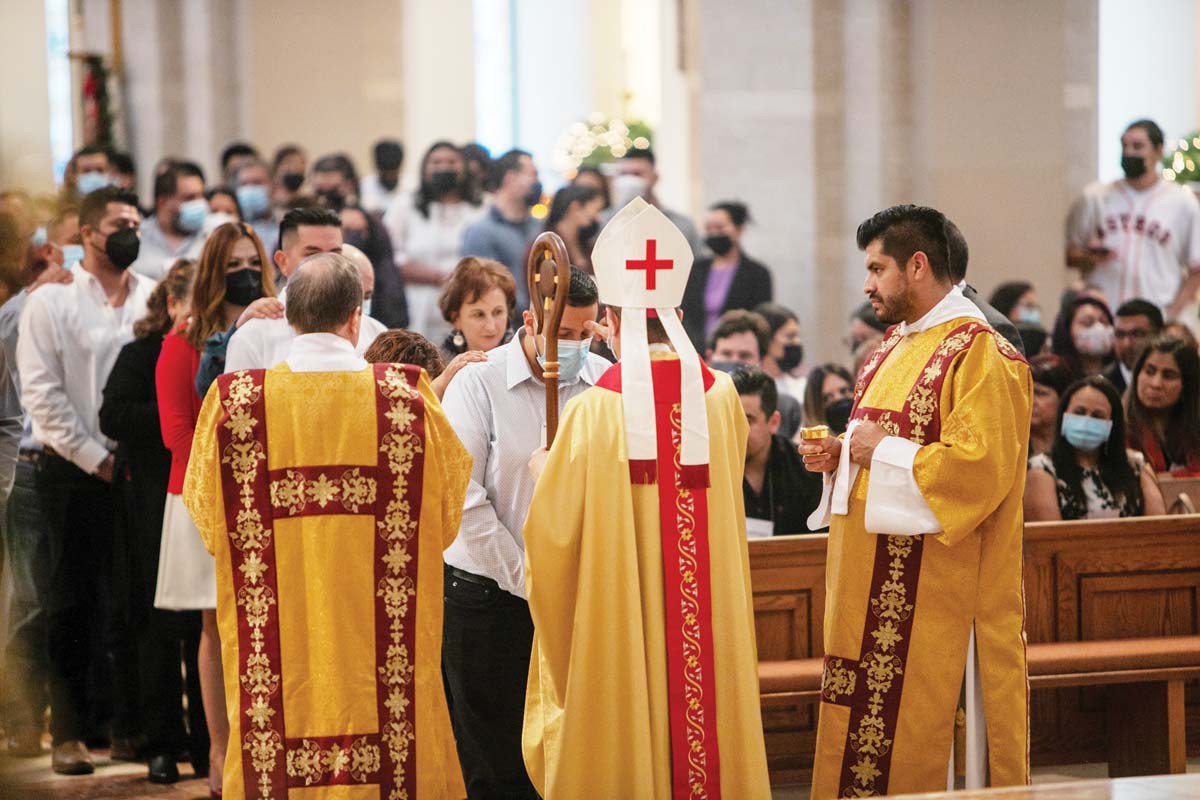 Each of the candidates confirmed had a sponsor standing behind them, with their right hand on the candidate’s shoulder, in support of presence and prayer.

At the Mass, the bishop recites a prayer that invokes God the Father for an “outpouring of the Holy Spirit,” according to the U.S. Catholic Catechism for Adults by the U.S. Conference of Catholic Bishops.
The bishop extends his two hands over all those to be confirmed, a sign of continuity of the New Testament custom of laying hands on those who would receive the gift of the Spirit.

The Mass also included a renewal of baptismal promises, showing the connection between Confirmation and Baptism. Confirmation, like Baptism, is only given once since it also “imprints on the soul an indelible spiritual mark.”

In a May 2018 general audience, Pope Francis continued his series of catechetical messages on the Sacrament of Confirmation.

“Just as Jesus received the outpouring of the Spirit at His Baptism in order to carry out His messianic mission, the Church prays that we too may receive the gifts and fruits of the Spirit that enable us to help the Body of Christ grow in unity and missionary zeal,” he said. “The gift of the Spirit is communicated through the laying on of hands and anointing with sacred chrism.”

He prayed for those who received the Sacrament of Confirmation and said that “sealed with the Holy Spirit, we are configured more closely to Christ and strengthened to bear witness to Him in our world. May each of us grow in gratitude for the gift received at our Confirmation and open our hearts ever more fully to the creativity of the Spirit who makes all things new.”

What exactly is the Rite of Confirmation?
The prophets of the Old Testament foretold that God’s Spirit would rest upon the Messiah to sustain His mission. Their prophecy was fulfilled when Jesus the Messiah was conceived by the Spirit and born of the Virgin Mary. The Holy Spirit descended on Jesus on the occasion of His baptism by John. Jesus’ entire mission occurred in communion with the Spirit. Before He died, Jesus promised that the Spirit would be given to the Apostles and to the entire Church. After His death, He was raised by the Father in the power of the Spirit.

The Rite of Confirmation deepens our baptismal life that calls us to be missionary witnesses of Jesus Christ in our families, neighborhoods, society, and the world. We receive the message of faith in a deeper and more intensive manner with great emphasis given to the person of Jesus Christ, who asked the Father to give the Holy Spirit to the Church for building up the community in loving service.†
— U.S. Catholic Catechism for Adults