In Dickinson, back to school and back to normal 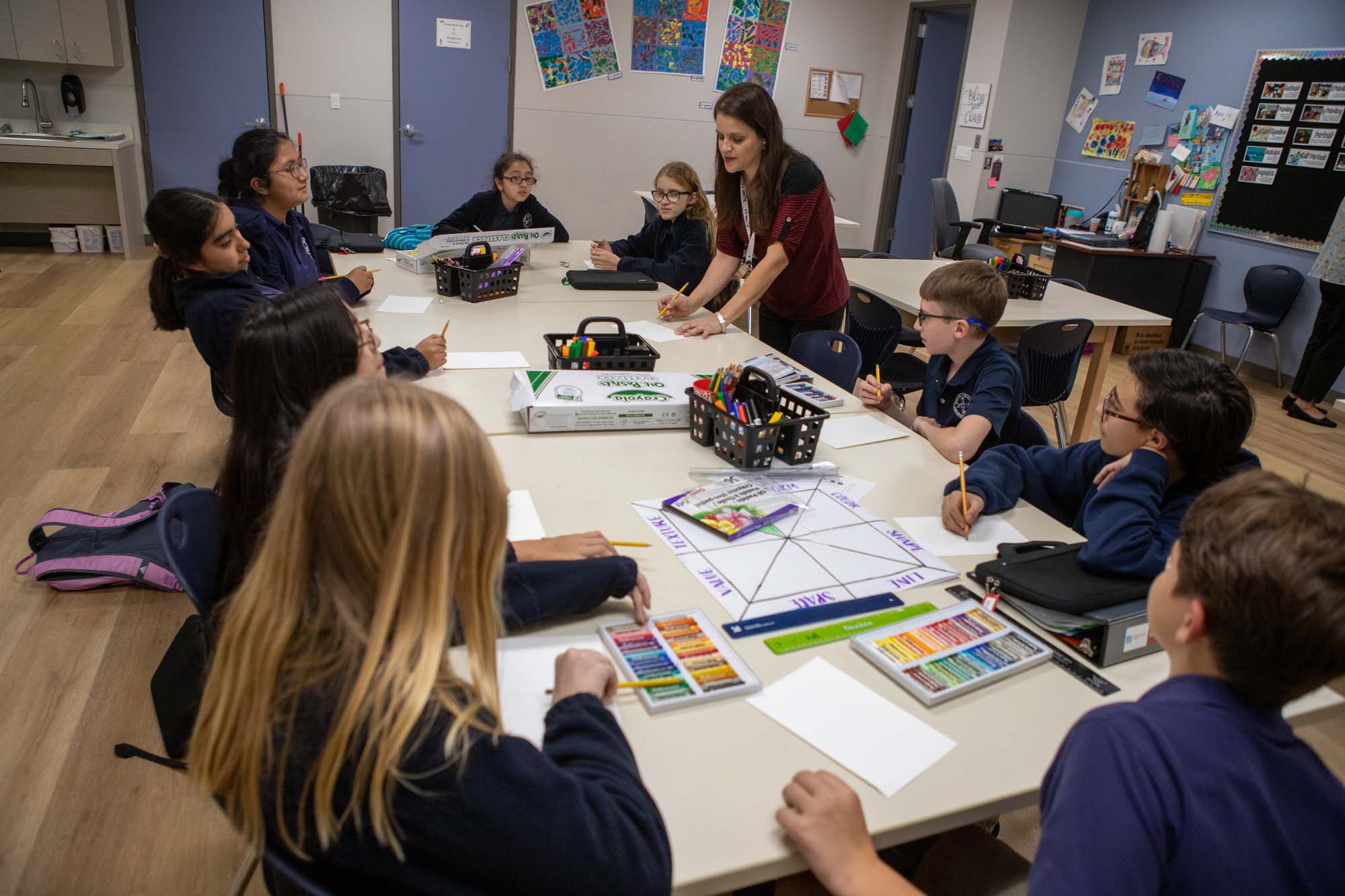 The school bell rang, and quickly students at True Cross Catholic School in Dickinson took a seat at tables in the school cafeteria. Or at least several of them tried to. The students hung every surprisingly way possible on their chairs, with water bottles clattering on tabletops and backpacks swinging around chairbacks.

One by one, their names were called by a teacher running the end-of-school show, with several more inside helping keep the students in line and on time.

“You’re heading to practice? Alright, take a seat there. We’ll get you there soon,” one teacher tells a buzzing group of junior high students with duffle bags in tow.

With each crackle of the wireless loudspeaker, name by name, the students shuffled towards the back of the school campus, out the door and into the refuge of a parent’s or guardian’s vehicle. It’s hard to imagine that just five years ago, the school campus and the Shrine of the True Cross parish became a water-logged highway for boats flying by on FM 517 and neighboring Dickinson Bayou that borders the school and parish grounds.

Five years ago, Hurricane Harvey brought its historic rains to the Texas Gulf Coast and caused an estimated $125 billion in damage, second only to Hurricane Katrina. The storm also claimed at least 68 lives in Texas.

Dickinson flashed across headlines around the world when a photo of a flooded retirement home, one that’s just down the road from True Cross, went viral on social media, showing elderly residents floating in deep floodwater. The photo prompted boat and airlift rescues, many of which whizzed by the True Cross campus for days as the water receded over the next several days. Dickinson saw at least 50 inches of rain during the storm, which flooded nearly 80% of the city, according to reports.

The historic storm began a pattern of change and adaptation for True Cross School Principal Yolanda Agrella and her staff, as well as their students and families. The storm forced the school to temporarily meet at Our Lady of Fatima School in League City, some 15 minutes away from the Dickinson campus.

Weekly renovation meetings pulled Agrella in every direction as she tried to shepherd her students, faculty and staff during a time of recovery. Many of her students’ families were also doing the same exact thing: rebuilding their homes and trying to start over.

Then eight months later, another unthinkable tragedy shook the Dickinson community to its core. Ten people died, and 14 people were injured in a terrible shooting at Santa Fe High School in Santa Fe. While True Cross isn’t the closest parish to Santa Fe — that would be Our Lady of Lourdes in Hitchcock — many at True Cross have families close to Santa Fe, often making the trek between the tight-knit communities of Santa Fe, Hitchcock, La Marque and Texas City.

A number of students at True Cross school and parish had either family or children at the high school, so when that terrible day in May arrived, very few lives were untouched. Agrella’s own sister had been principal at nearby Kubacak Elementary School.

Then, after a year marked by flux and change, True Cross students made a homecoming and returned to the Dickinson campus in August of 2018, a year after the flood made them leave. Throughout the ordeal, the school offered their students and families clear and consistent access to mental health resources, including having counselors and therapists available to the youngsters, many of whom still winced and cried at the sound of thunder and rain.

With the passing of the fifth anniversary of Harvey, Agrella also recognized that there are now five years of students who were born after the storm and never knew the fear of the flood. But even to this day, the principal still sees a difference in the students who were rescued during Harvey. She had estimated that a quarter of her students were displaced by Harvey.

Students who were in the first grade when Harvey came were now entering junior high. Many of these students were young and very impressionable when they were rescued by boat, by helicopter and by trucks.

“There’s a sadness about them,” Agrella said. “They’re cautious. They’re always suspect of something happening to them, and [Harvey] really did affect them. They remember everything,” she said. The students had to realize and perhaps relearn that the school was a safe space, a place where they could feel welcome and secure, even in the wake of the Santa Fe shooting.

And even now, Agrella said, with a hint of sadness marked by a resolute commitment to school safety, the school’s next project was to shore up its security across the campus, especially another school shooting tragedy in Uvalde.

And then, when the True Cross community appeared to catch its breath, the world flipped upside down with the COVID-19 pandemic. Not even two full years back on the school campus, the community experienced another exodus, like the rest of the world, during the pandemic shutdown.

Joining other schools around the world that turned on a dime to remote teaching and virtual learning, Agrella saw it as just another challenge.

“It was one thing after another, and we’ve accepted it. It’s just how it is, and we’re problem solvers,” she said. “We never ask for what’s next, we just take what is in front of us, and we did. And we just take care of it.”

When students returned after the school shuttered for the rest of the 2020 school year, and in the years since, Agrella said she noticed the students had unexpected struggles. Some had never been in school and were missing some of the academic experiences and socialization skills learned when in school with other very young students. In other cases, it was students who received semesters of patchwork homeschooling from families who weren’t equipped to teach at home.

She said her teachers were working harder to break the learning curve the students were struggling with and remained focused on improving their learning skills in nearly every aspect. But still, even with the occasional COVID-19 hiccup, school was back in session, and their students couldn’t be happier to be back together in the classroom. At least most of them.

On a recent late August school day, with nearly a month of school under their belts, True Cross junior high school students rotated between their rooms during the final class exchange of the day. One grade went to art, another to music and another would close the day with physical education in the school gym.

In art, the teacher guided them in a complex drawing of an apple. In music, students learned pitches from a pitch pipe. And in the gym, pretty much any sport was played: volleyball, basketball, soccer and even ping pong.

In between each class, the school principal quietly inspected the school’s large floor-to-ceiling trophy case, filled with generations of schools’ successes, all recorded and celebrated by nearly every plaque, ribbon and multi-tiered column trophy imaginable. Once hidden away after Harvey, now spruced and sparkling from the storm’s floodwaters, photos of beaming students at various championships and academic events once mingled with sparkling medallions and permanent recognitions.

A screech of tennis shoes hitting the gym floor turned Agrella’s gaze back down the hallway to the group of students, just a portion of the students that she and her faculty now led, ones that just might soon add another record to the books or another trophy to the case.

Another day at True Cross Catholic School had come and gone.