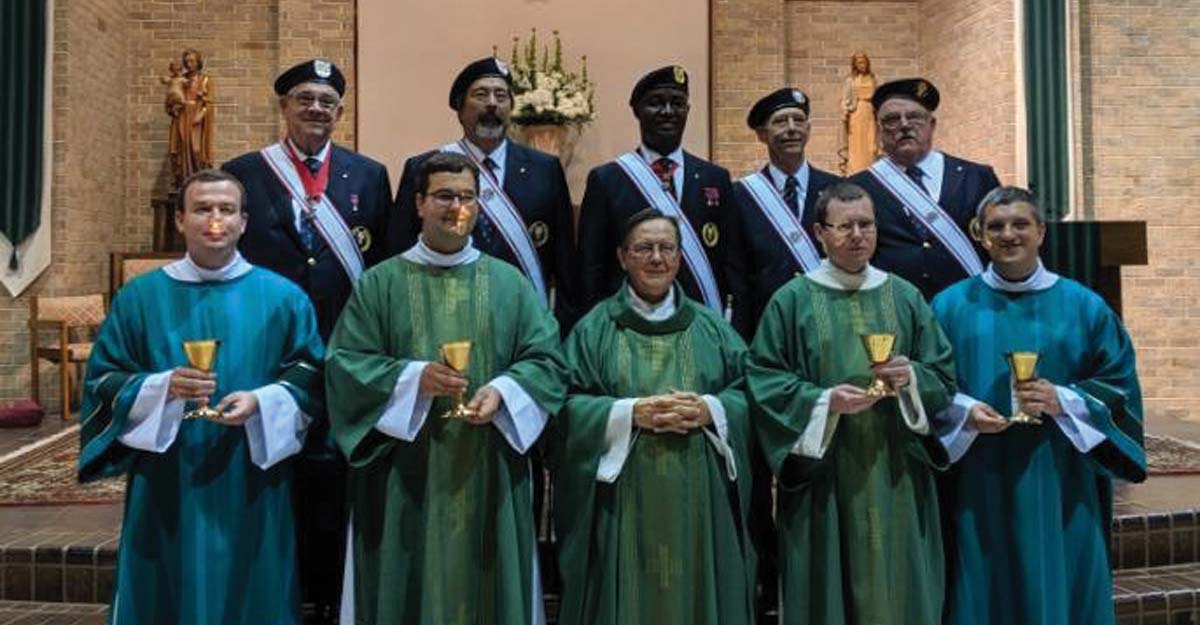 Four transitional deacons including Jakub Lasak of the Diocese of Ostrava-Opava, Milan Mastera and Vojtech Radoch of the Archdiocese of Olomouc, and Miroslav Strunc of the Diocese of Ceske Budejovic, visited Texas on a formation trip this past summer. They received an experience of Texas culture and the Catholic Church in Texas. (Photo courtesy of Nan DeGhelder)

HOUSTON — Four transitional deacons from the Czech Republic visited Texas, including Houston and the Texas Hill Country, this past summer.

Jakub Lasak of the Diocese of Ostrava-Opava, Milan Mastera and Vojtech Radoch of the Archdiocese of Olomouc, and Miroslav Strunc of the Diocese of Ceske Budejovice received memorial chalices from the Fourth Degree Knights of Columbus during their visit.

Also during their visit, they went to St. Justin Martyr Catholic Churc and attended a Czech Mass at St. Bartholomew Catholic Church in Katy. They also visited NASA’s Johnson Space Center and Space Center Houston, the Czech Center Museum and had barbecue at Pappas after a visit at the Co-Cathedral of the Sacred Heart in downtown Houston.

While in Houston, the four deacons encountered an almost identical experience of the Holy Mass, trip coordinators said. They also took notice that, in the Czech Republic, some churches are heated, while in Texas almost all have air conditioning.

They also said that a special feature of the local churches is also the separate baptistery with a font and community centers where people gather for various activities or meetings.

NABCA prays in solidarity with Imelda victims at annual meeting 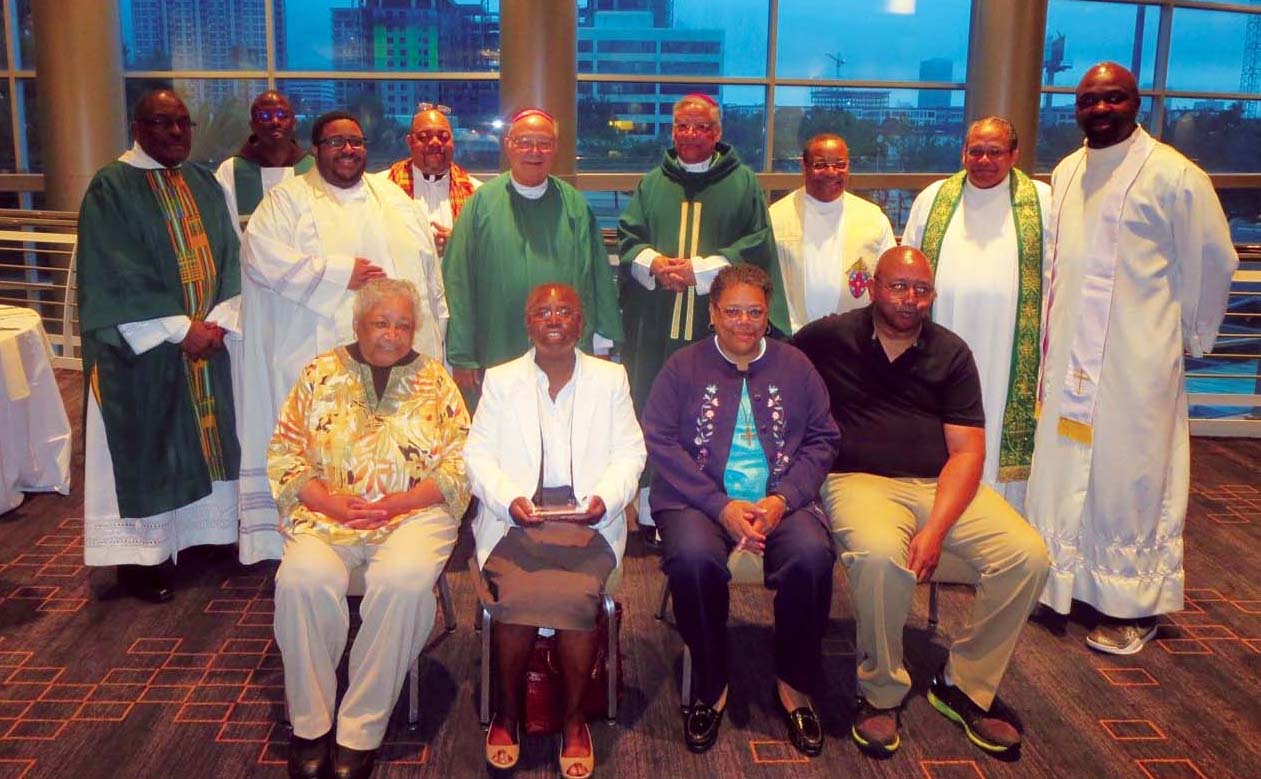 HOUSTON — The Archdiocese recently hosted the annual meeting of the National Association of Black Catholic Administrators (NABCA) Sept. 18 to 21.

Bishop Curtis Guillory of the Diocese of Beaumont, who is the Episcopal Moderator for Region X; Bishop Joseph Perry, auxiliary bishop of Chicago who is Episcopal Moderator for NABCA; Father Reginald Samuels, vicar for Catholics of African Descent for the Archdiocese and others met with 29 dioceses and six affiliate Catholic organizations from across the U.S.

NABCA is a Catholic organization dedicated to providing a forum for Black Catholic administrators to share collective resources to address needs effectively, issues and concerns facing Black communities; develop and mentor Black Catholic leadership; and be a change agent for an inclusive Church.

During the three days of deliberations, the group conducted the business of the organization, elected new officers and responded to Tropical Storm Imelda.

In response to the catastrophic flooding and record-breaking rainfall, NABCA offered prayers for those negatively impacted by the storm. Its members also pledged financial support to the Diocese of Beaumont, which is one of its members. 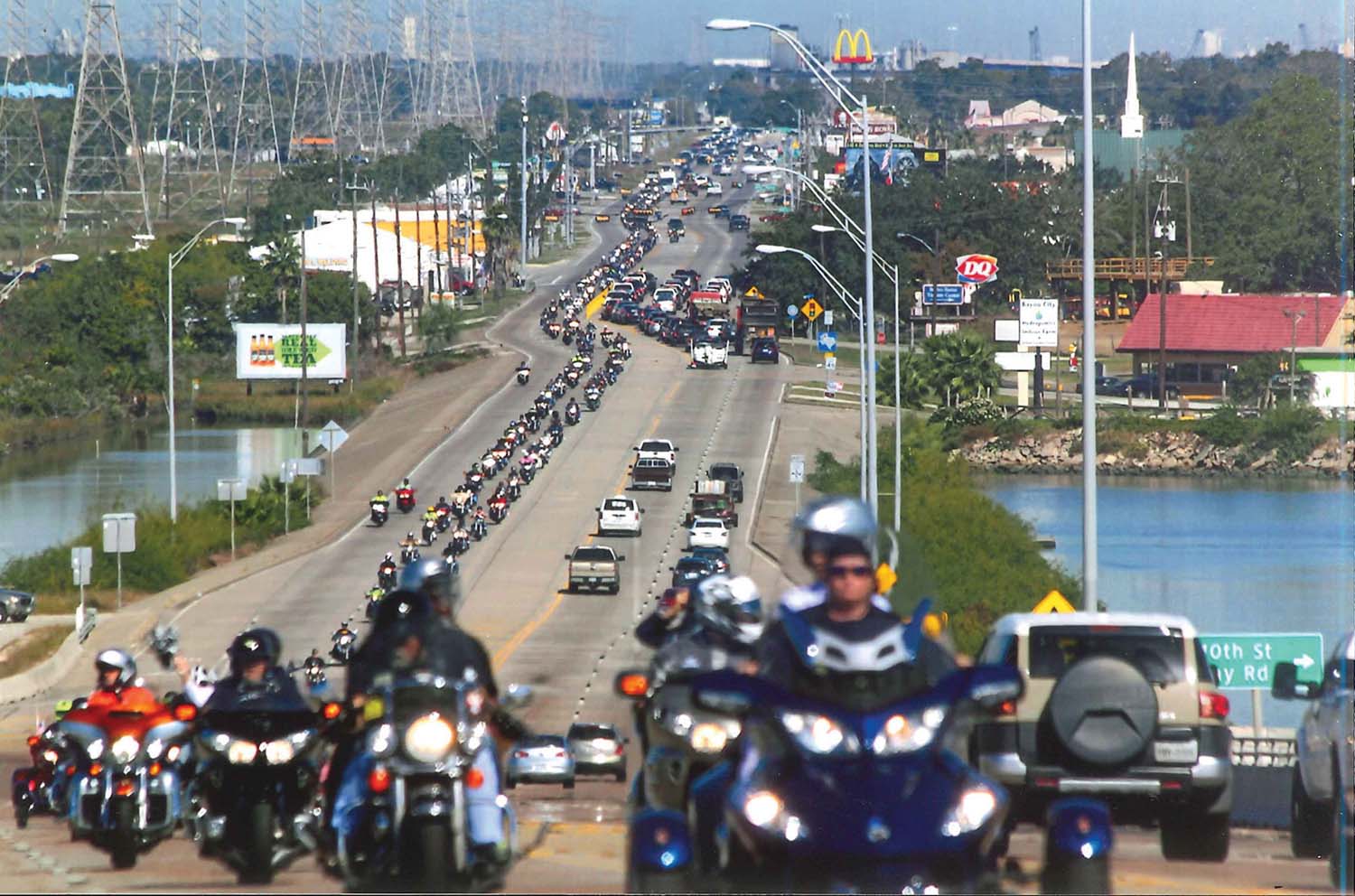 HOUSTON — The 15th annual CHRISTUS Foundation for HealthCare’s Nun Run is set for Oct. 26 at 7:30 a.m. Presented by USFHP, the 40-mile motorcycle bike ride starts at the Villa de Matel, located at 6510 Lawndale St. in Houston.

The annual ride, which features the Sisters of Charity of the Incarnate Word and other consecrated religious orders riding motorcycles, benefits the CHRISTUS school clinics. Blue Knights police will escort the ride which will conclude at Topwater Grill in San Leon, where participants end with a finishing-line party.

The Nun Run brings the best of motorcycles and community together to support keeping children healthy. Riders who register for the“VIP Experience” have the opportunity to “ride double” and escort a sister to San Leon.

“The event is so incredibly fun, but most importantly, it raises much-needed funding for so many families who are living in economically underprivileged situations and have difficulty securing the medical care they need to get well and stay healthy,” Yvonne Mills, long-time event participant and committee member, said.

Funds raised through this event provide vital healthcare services to children in 16 schools in the Greater Houston area. Through CHRISTUS School Clinics, students in some of Houston’s most underserved communities receive access to healthcare, immunizations and mental health counseling during the school day, keeping children healthy and productive in the classroom.

Registration fee for individual riders is $35. To register or learn more about additional support levels and benefits, visit christusfoundation.org or call 713-803-1808.