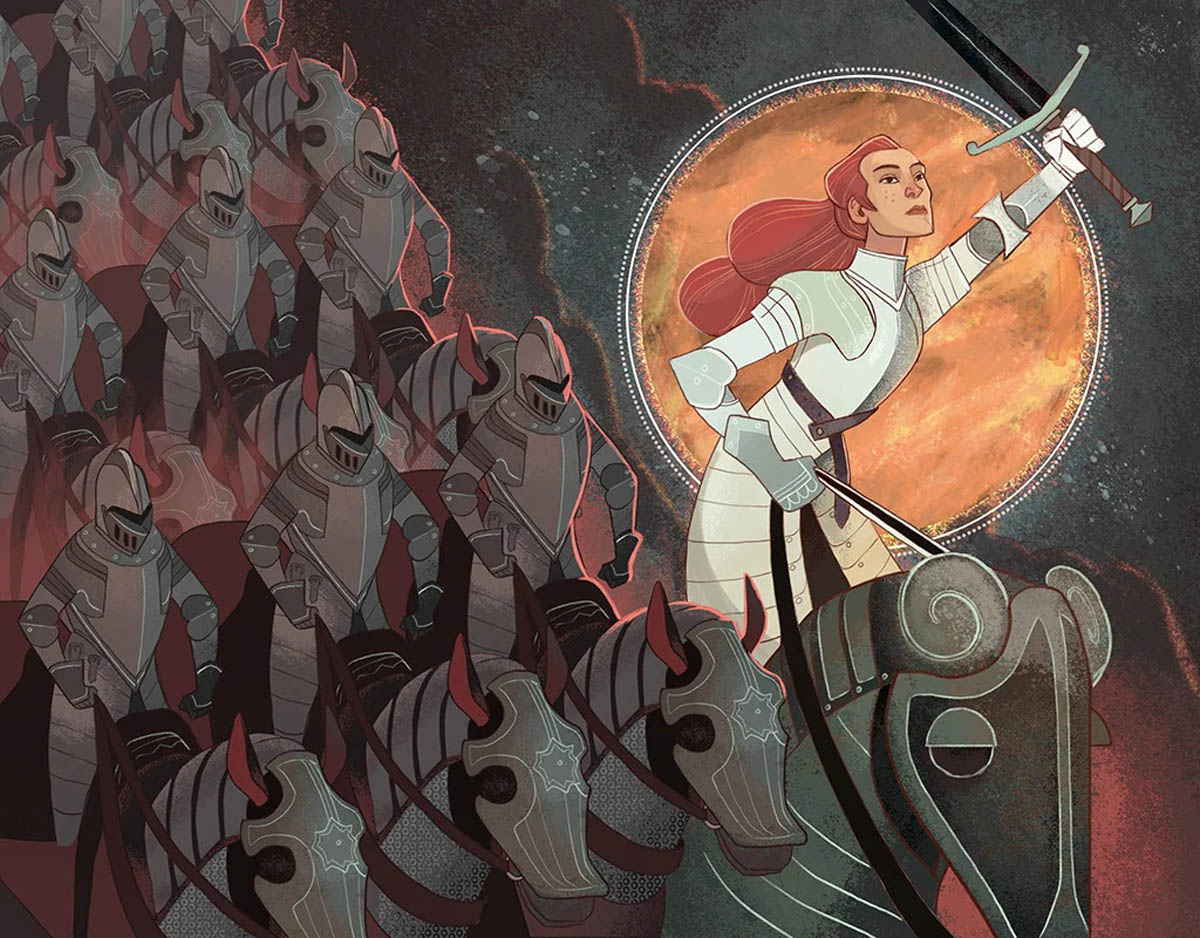 Striking illustrations, such as this depiction of St. Joan of Arc, are a hallmark of “Stories of the Saints: Bold and Inspiring Tales of Adventure, Grace and Courage” by Carey Wallace. (Photos courtesy of Workman Publishing)

BALTIMORE (CNS) — Serenely peering out from stained-glass or standing atop pedestals while piously presenting the instruments of their martyrdom, the saints can often appear otherworldly in church art.

Carey Wallace’s new children’s book, “Stories of the Saints: Bold and Inspiring Tales of Adventure, Grace and Courage,” shows that holy men and women — whose miraculous deeds, charitable works and battles with armies, beasts and demons she chronicles with gusto — also were what Wallace calls “relentlessly human.”

Wallace pointed out that some popes, including St. Gregory the Great, fled when they were elected to the papacy. Other saints, such as St. Jean Vianney, failed in academic work. St. Teresa of Kolkata, the great 20th-century missionary who founded the Missionaries of Charity, often felt alone and sometimes wondered if God loved her.

Yet, the saints refused to let their shortcomings stop them from doing God’s work in a great diversity of ways.

The author found that despite their different approaches, saints over two millennia tended to share two qualities: a profound love for the poor and a true love for God that is different from a love for the Bible or for Church “rules.”

“That’s what animates all of these stories in my reading and telling of them,” Wallace told the Catholic Review, the news outlet of the Archdiocese of Baltimore.

Produced by Workman Publishing, “Stories of the Saints” is geared to children between 8 and 12 but is also appropriate for teens and adults. Nick Thornborrow, a video game artist, dramatically illustrates the book with contemporary images of the saints that sometimes take up two full pages.

Unlike other children’s books about the saints that can be heavy-handed in imparting spiritual lessons, Wallace’s work relies on the stories themselves to leave their own impressions. They incorporate both legend and historical facts.

“We wanted to sort of let children and adults who come to this book find whatever is there for them at that moment without trying to tell them what that should be,” Wallace said, adding that she also wanted the book to be accessible to those who were just looking for fantastic adventure tales.

In researching and writing the book, Wallace said the saints gave her hope she could be like them.

“I could no longer tell myself these people were so much better than me,” she said. “It lays some of the responsibility on your shoulders that you might otherwise want to squirm out of — that you, too, might be capable of doing some of these things that really change the world if you follow God and love Him.” †