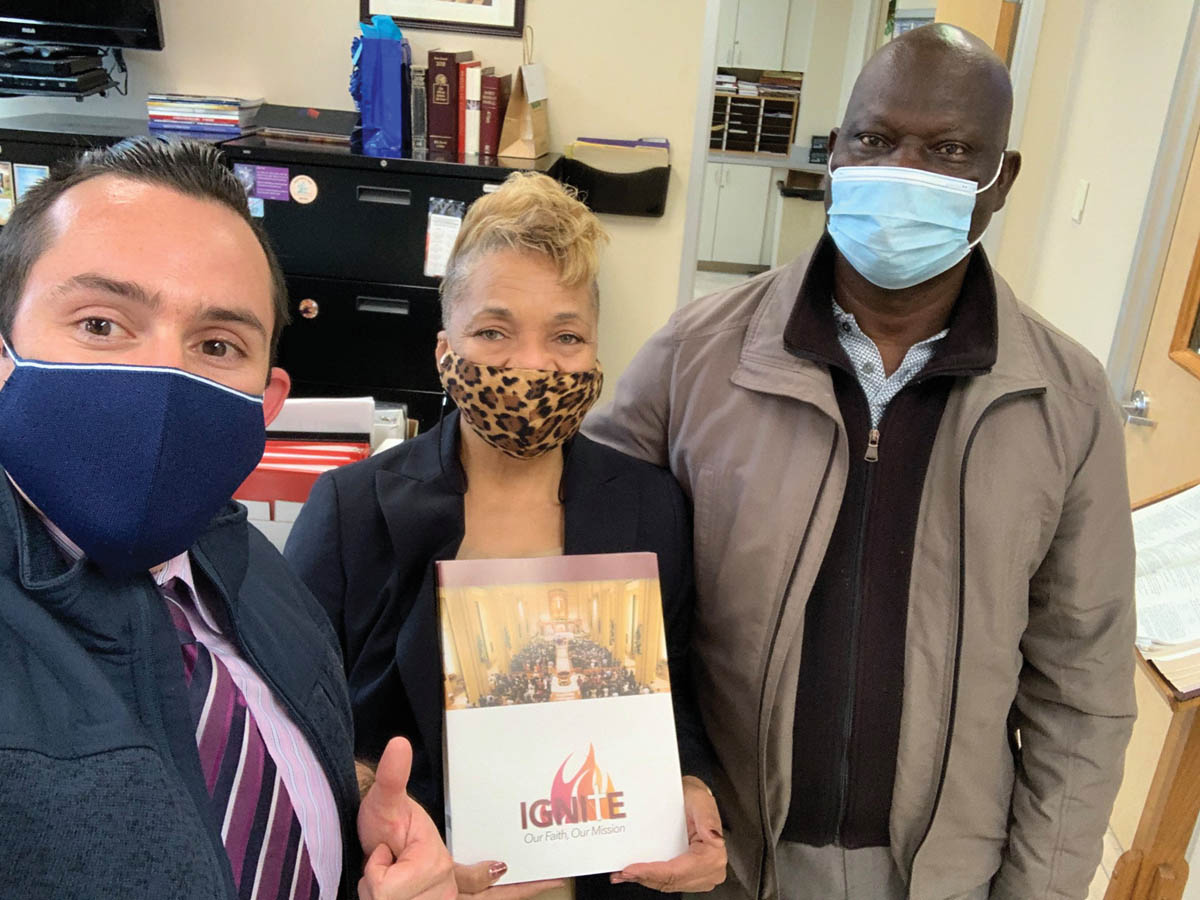 The IGNITE campaign has begun at St. Francis Xavier Catholic Church. Father Michael Saah-Buckman, S.S.J. (Right), said the parish will use the parish portion of the funds to refurbish the pews and replace the sound system in the church and prayer garden. Also in the photo are Guidance in Giving’s Bryan Bedoya and St. Francis Xavier Catholic Church’s business administrator Shirley Foreman. (Photo courtesy of Guidance in Giving)

HOUSTON — The IGNITE: “Our Faith, Our Mission” Capital Campaign has relaunched, continuing its efforts to address the vital needs of our local Church.

“Amid the challenges of the last 12 months, the clergy and lay faithful of the Archdiocese of Galveston-Houston have shown themselves to be resilient,” Daniel Cardinal DiNardo said. “The relaunch of the IGNITE Campaign is an encouraging sign of the vitality of this local Church, and of our commitment to spreading the Good News of Jesus Christ.”

The major capital campaign was launched in 2015 to address the campus infrastructure and housing needs of St. Mary’s Seminary, as well as tuition assistance at Catholic schools, faith formation and individual parish needs. The campaign also added a future disaster recovery fund and a fund to address rebuilding parishes and schools in light of Hurricane Harvey. With assistance from Guidance in Giving, a Catholic fundraising firm, the IGNITE campaign aims to raise $150 million.

The current COVID-19 pandemic, as well as Hurricane Harvey, put unplanned pauses in the campaign. With vaccines on the way and a “return to normal” on the horizon, the vital needs supported by the campaign are back in the forefront.

“The landscape has changed, our worlds have changed, but what hasn’t changed are the needs of our Archdiocese,” Aad de Lange, chief finance officer and business manager for the Archdiocese. “If anything, they are even more pressing.”

De Lange said the Archdiocese is committed to the IGNITE campaign, “more than ever.”

“We ask those parishioners participating in 2021 to join their brothers and sisters across the Archdiocese who have given so generously and make a gift,” he said. “Together, we succeed, as one Archdiocese, one faith, one holy, Catholic Church.”

As part of the campaign, 33% of the funds collected from a parish are returned to that parish on a quarterly basis to be used toward specific church needs, including technology upgrades, beautification and repairs. As of April 20, $6,858,094 has been given back to the parishes.

St. Justin Martyr Catholic Church conducted the IGNITE campaign in the Fall of 2018. Father Paul Chovanec stated that with the help of Guidance in Giving, the campaign progressed smoothly.

“Parishioners are completing their pledges steadily, and we’re in our final phase of the project,” he said.

Father Chovanec said that, so far, the parish has used the money received from the campaign to replace failing air conditioning units in the church.

Father Larry Wilson, pastor at Shrine of the True Cross in Dickinson, was slated to conduct the IGNITE campaign in the Fall of 2020, but due to the COVID pandemic, began this year in January of 2021.

“At present, we have shown the (IGNITE informational) video in the church during Sunday Masses and have proceeded to have the smaller meetings to explain the campaign,” he said.

Earlier this month, the parish also conducted weekend gatherings, following Masses, available to everyone who had not already attended the explanatory sessions.

Father Wilson, who has been meeting with Guidance in Giving regularly, said that the parish will also be handing out IGNITE brochures after weekend Masses to those unable to attend a reception.

“The parish community seems interested in the campaign and we are optimistic about the outcome.”

Father Chovanec said IGNITE is important “because it is a well-paced and steady way to raise funds for large ongoing needs in our Archdiocesan family, and it benefits parishes above and beyond the possibilities of the offertory collection and periodic fundraising events.”