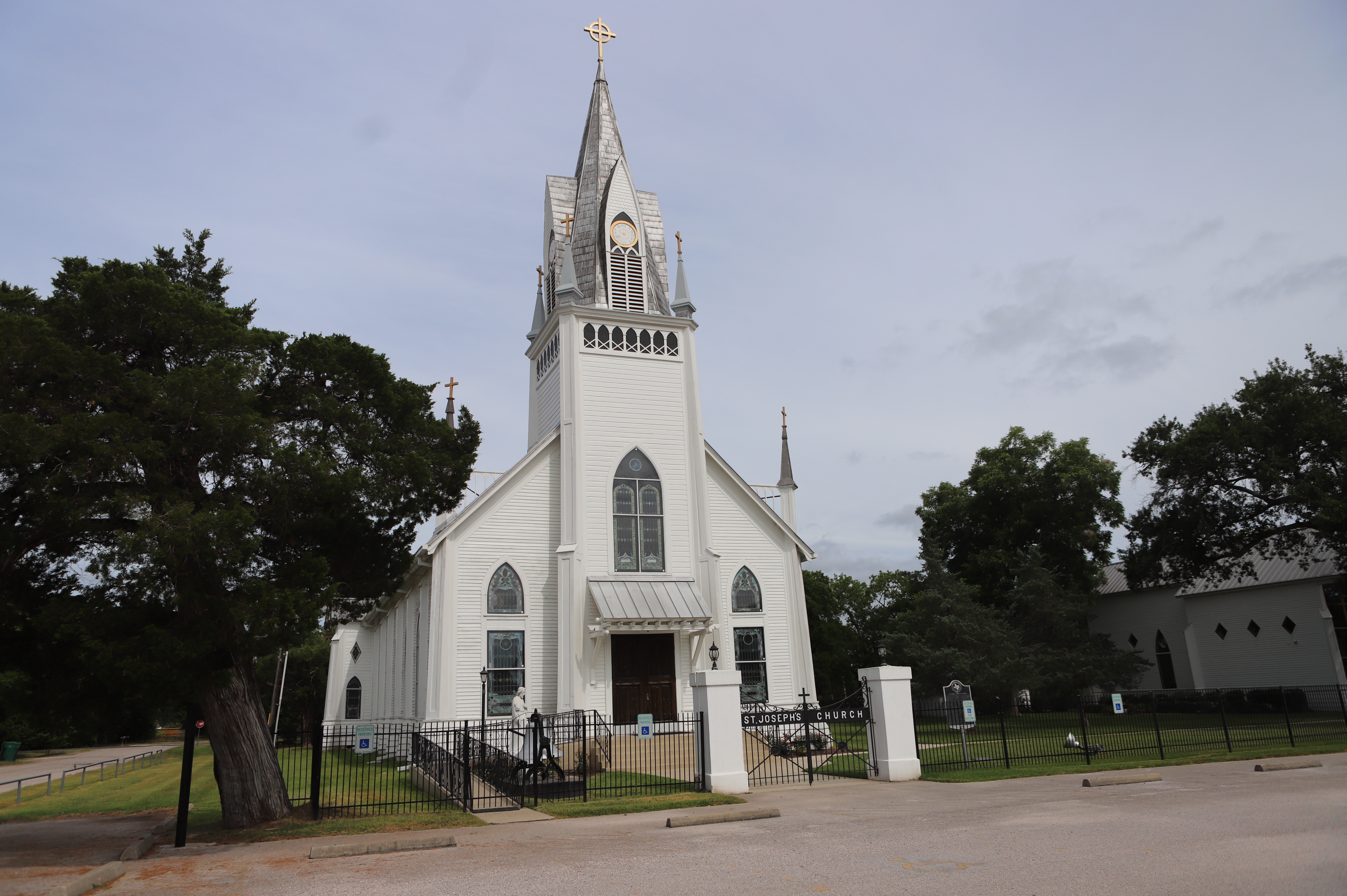 St. Joseph Catholic Church in New Waverly was established in 1869.

BRAZORIA — Consider this an invitation to visit some of the oldest parishes in the Archdiocese.

Since its founding 175 years ago, the faithful, led by unwavering clergy and other religious leaders, have carried the Catholic faith forward through Texas and U.S. history and into legend.

These brave Catholics, many far-flung immigrants to the Texas frontier from countries continents away, staked their lives on their faith, planting seedling church communities that blossomed decades later into the first parishes of the region. And though the Diocese of Galveston once stretched far to Oklahoma, Colorado and down to Mexico, today it encompasses 10 counties, each with Catholic parishes sustaining the local faithful, many of which are historic. In this ‘Icons of Faith’ series, we’ll briefly explore the oldest parish in each county.

St. Joseph on the Brazos

Perhaps it’s best to start from the beginning: St. Joseph on the Brazos Catholic Church is the oldest Catholic community in the Archdiocese today. Brazoria County, the quiet town’s namesake, lays a humble claim to this title with its “newer” brick and wood church built in the 1960s. The parish, founded in 1840 by a group of German Catholic immigrants along with their pastor Father Jacob Weiser, has seen its church demolished twice by storms, including the Great Storm of 1900.

After generous parishioners donated land to the parish, its newer construction was built to welcome more parishioners.

Today the interior of the church includes a lofty choir space and illuminated beams that stretch upward. Fourteen rows of pews line the sanctuary, each in an attractive dark wood, drawing the eyes towards the Blessed Sacrament in the tabernacle.

The wooden beams bring a sense of a quiet forest, as large pothos planters sit at the feet of St. Joseph and the Blessed Mother, as well as near the ambo. Each day, bright morning and afternoon sunlight easily fills the church through two long rows of square windows. Behind the altar, an intricate floor-to-ceiling tapestry offers a delicate backdrop to a suspended crucifix hung over the limestone altar. Another limestone table supports the tabernacle, a Texas element that evokes a rustic sensibility.

Led by Father Tin Pham, who recently marked his 25th ordination anniversary, the parish is home to nearly 500 families, many of whom have been citizens of the historic city of Brazoria for generations. According to Archdiocesan records, St. Joseph is older than the Diocese of Galveston, the founding diocese of Catholicism in Texas.

The church’s red roof is hard to miss among the tall leafy green trees that surround the parish’s six acres. The church and its parish hall hum with activities during the week, with ministry meetings and social gatherings like the annual church bazaar.

The church remains open for visitors every day as an oasis of faith for all those seeking refuge with God.

Just up the coast from Brazoria, nestled near the heart of Galveston Island’s downtown in Galveston County, sits St. Mary’s Cathedral Basilica. Considered the mother church of the Catholic Church in Texas, she too has weathered many storms. Now the community is part of Holy Family Parish.

The church was one of the few Galveston landmarks to survive the Great Storm of 1900 that devastated the island, claiming thousands of lives, including several nuns and a priest.

The cathedral, located at 21st and Church Street, survived fires and a terrible 1844 yellow fever epidemic, which killed Father J.M. Paquin, a newly arrived missionary priest. The cathedral, which still stands today and was home to the 175th-anniversary opening Mass celebrated by Daniel Cardinal DiNardo last month, was completed and dedicated in 1848. The Basilica also survived the Civil War, which brought violence to its doorstep: the cathedral was riddled with bullets.

On May 4, 1847, Pope Pius IX named St. Mary’s Cathedral as “The Mother Church” of the newly established Catholic Diocese of Galveston, then the only diocese in the state of Texas.

As the population shifted towards Houston, the Diocese of Galveston was redesignated as the Diocese of Galveston-Houston in 1959, prompting a Co-Cathedral for Houston.
St. Mary’s was recognized as a Texas state landmark in 1968 and was added to the National Register of Historic Places in 1973. It was named a minor basilica by St. John Paul II in 1979.

In 2008, the historic church took on eight feet of storm surge during Hurricane Ike. A nearly six-year renovation effort was completed in 2014 when the church reopened to the public on Easter Sunday. More recently, the basilica underwent another renovation. The two spires were restored, along with the church’s stained glass windows, waterproofing and other preventative work. The iconic St. Mary Star of the Sea cast-iron statue, which weighs 2,500 pounds, was also restored. At 11 feet tall, she received a $50,000 restoration.

Led today by Father Ekenedilichkwu “Jude” Ezuma, who took the reins from the Franciscan Friars of the Province of St. John the Baptist, who long helmed the basilica, the church is part of Holy Family Parish, a network of churches on the island. Several, historic in their own right, were founded by the island’s different ethnic communities.

If you take Broadway from Galveston to I-45 North and drive all the way into Walker County, you’ll trade palm for pines and pass the famous Sam Houston statue along the way.

But don’t drive to Dallas: Take Exit 102 and pay a visit to St. Joseph Catholic Church, a community with a history deeply connected to the Polish immigrants who came to Texas more than 150 years ago.

Established in 1869 by those Polish immigrants and their equally hardy priest, Father Felix Orzechowski, the members later brought construction materials from Poland to build a Gothic-inspired church with Father Thomas Bily, a a Bohemian immigrant, in 1906. The parish welcomes many visitors willing to pull over from I-45 and visit the parish’s restored church and newer chapel.

Perhaps not as colorful as the Painted Churches in the Texas Hill Country, St. Joseph’s simple gold and white trim is reminiscent of a hand-painted Polish “pisanka” egg. Mind-blowingly ornate stained glass windows line the walls. The community’s Polish origin culminated in a state visit by Poland’s President Lech Walesa in 1996.

A little over 10 years later, Father Daokim Nguyen arrived to help shepherd the community. He was also perhaps the first Asian priest in Walker County to lead a Catholic parish. Soon parishioners recognized the loving care Father Nguyen carried in his heart to draw the parishioners closer to the love of Christ and the community continued to grow in faith and in numbers.

In 2019, ahead of the parish’s 150th anniversary, an $800,000 restoration campaign completely restored the aging wood buildings’ exterior. More than a century old, the wood had severely deteriorated. Restoration also included the two spires, iconic clocktower and steeple that’s visible all across New Waverly.