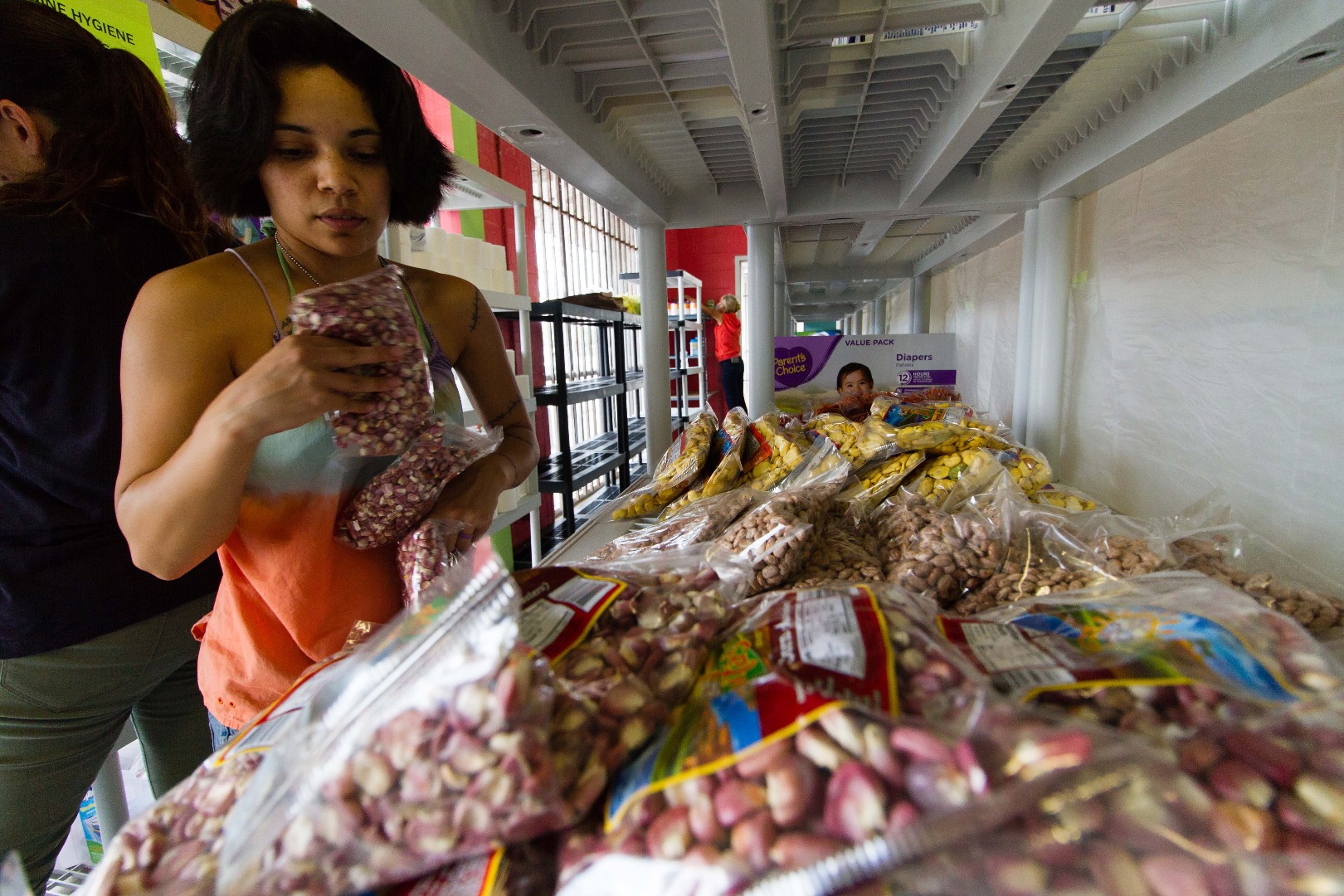 Volunteers from the Catholic Charismatic Center sort dry goods at a Hurricane Harvey donation center last year during the aftermath of the devastating storm. In July, parishes across the Archdiocese gathered to learn about Harvey's recovery efforts and how to prepare for the next storm. File photo by James Ramos/Herald.

HOUSTON — With year-old memories of Hurricane Harvey floods as fresh as some repairs at local churches and homes, the Archdiocese hosted three regional hurricane preparation training workshops for church employees and volunteers July 10, 11 and 12.

Deacon Turner told participants at the July 10 training in Galveston County at Queen of Peace Catholic Church in LaMarque that the parish contacted the call center, which notified the Archdiocese and the next day a representative was out at the parish assessing the damage. A water remediation team turned out the very next day to begin repairs, he said.

The call center, which is located outside the storm area, is contracted by the Archdiocese to connect authorized church staff members such as the pastor or disaster coordinator with the Archdiocese to relay damages or the need for resources, said Kirk Jenings, the director of Risk Management and Emergency Operations.

“We at the Archdiocese receive the information from the call center almost immediately as you hang up the phone,” Jenings said.

The workshop, facilitated by the Texas A&M Engineering Extension, had more than 50 participants from both Harris and Galveston counties, including churches on Galveston and Bolivar and as far away as St. Laurence Catholic Church in Sugar Land.

“It seems like we just get them all repaired and back up to par when we get another storm coming down,” said Renee Sims of the Holy Family Parish of six churches serving Galveston Island and Bolivar Peninsula.

Pre-landfall preparation, important at all parishes, is especially needed at the Galveston churches to wrap and safely store antiquities off the island, she said.

Dan Buchanan, Texas A&M facilitator, reminded participants to also use the offseason, December through May, to plan where to store or dispatch hazardous materials such as paints, solvents, pesticides and fertilizers.

When the storm is actually approaching, get statues, potted plants and other possible fly-away debris out of harm’s way. This type of work needs to be done before winds increase to 39 miles per hour, the cut-off for most ambulances and other emergency vehicles such as fire trucks, Buchanan said.

“We are known for our food at the church. We became a feeding station making meals for a thousand-plus people for 20 straight days of cooking,” Starr said.

“We had an average of 150 people at every meal,” she said. “I was in the kitchen cooking most of those days. But it was worth it to help our community.”

Knights of Columbus at Shrine of the True Cross in Dickinson, which only recently reopened its church this past Easter season after being flooded, also organized a similar community feeding program for several months.

“Before the storm, we communicated with our staff and parishioners through various methods using IRIS, Flocknotes, e-blasts and a phone tree,” Alvarado said.

Gulledge said, “Then afterward we used social media to ask for donations of cleaning supplies and received more than we needed for the church so we opened it up to become a supply center for the community.”

Another regional training workshop was held July 12 at St. Ignatius of Loyola Catholic Church in Spring, one of the hardest hit churches with flooding in its sanctuary that had its pastor Father Norbert Maduzia wading in thigh-deep water to rescue its processional crucifix as Jesus floated face down.

Nine months later, the church reopened after extensive renovations with Daniel Cardinal DiNardo rededicating the sanctuary and altar. During the repairs, the church spent $25,000 a month out of its budget to rent a large air-conditioned event tent to hold its Masses and other programs.

The July 11 regional workshop at St. Maximilian Kolbe Catholic Church in northwest Houston received the lowest attendance with only about 20 braving a thunderstorm that evening.