‘Humbled by the calling’: Meet the three men set to be ordained as priests June 4 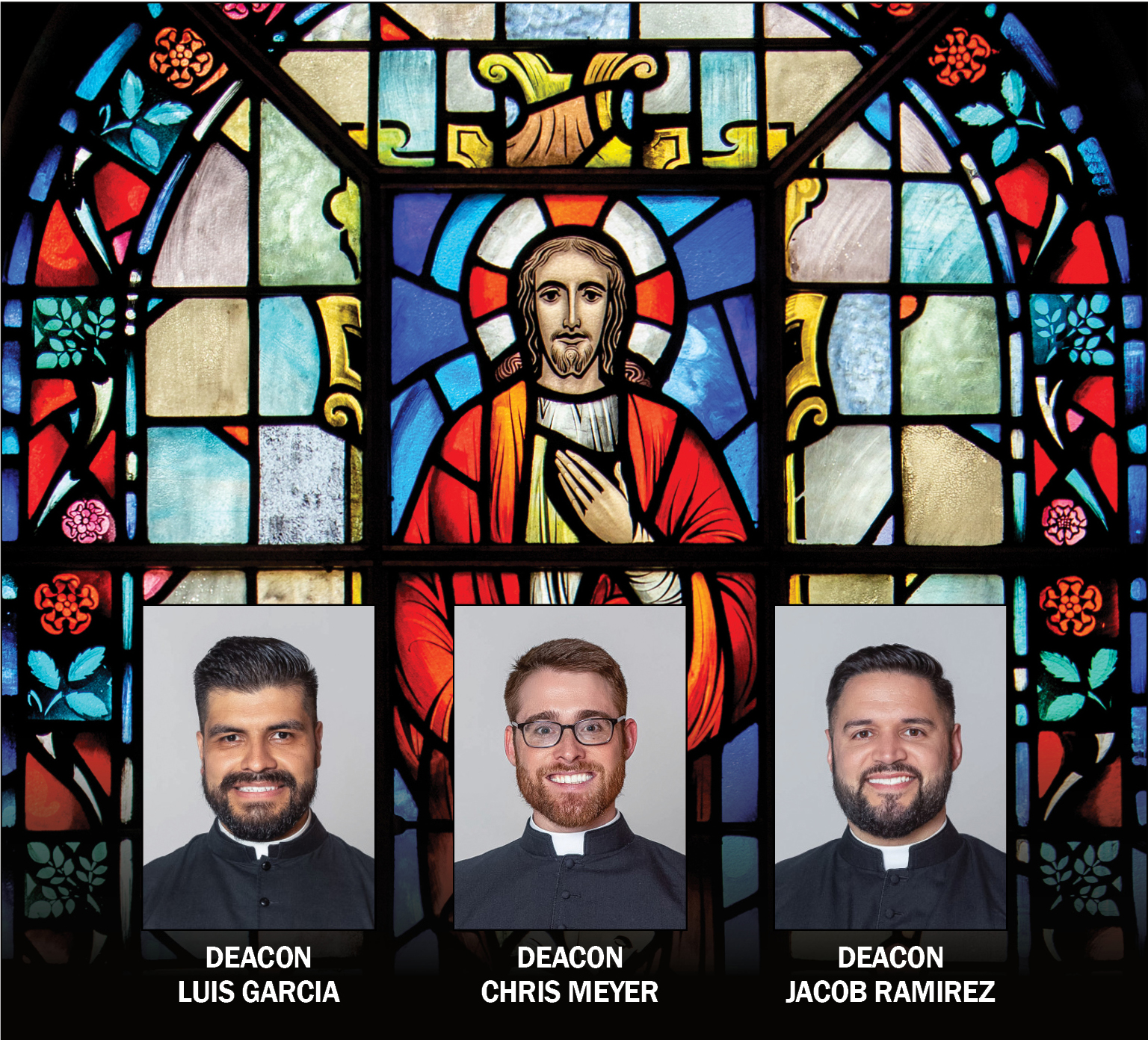 HOUSTON — Deacons Christopher Meyer, Luis Garcia and Jacob Ramirez — after years of academic and spiritual challenges — are set to be ordained as priests by Daniel Cardinal DiNardo on June 4 for the Archdiocese.

“The first was during my freshman year in Scripture class at Strake Jesuit with Father Mark Thibodeaux. I remember being convinced I was learning about the Truth and moved by a priest who had dedicated his life to that Truth - to Christ and his Church,” Deacon Meyer said.

“At the end of that school year, I told Fr. Thibodeaux I was considering the priesthood. He will be vesting me at my ordination,” the 32-year-old said.

“I was in a very good relationship,” the 32-year-old said. “But I kept experiencing God calling me back to those first thoughts of the priesthood. That tugging stopped the moment I was formally accepted to the Archdiocese. It was replaced by peace and consolation.”

For Deacon Garcia, who grew up in northwest Houston near Spring, his route was not as direct, although he was very active in his home parish of Prince of Peace.

“I was involved in various ministries from serving at Mass, teaching as a catechist and co-leading mission trips,” he said.

Although he was born in Mexico as the middle child of Lorenzo and Maria Garcia, he was raised in Houston since he was five years old. But a church mission trip to Guatemala opened his eyes to his blessings.

“I felt a real intimate experience of God in the poor while on (that) mission in Guatemala which has led me on this road to discerning my vocation,” Deacon Garcia said.

The 33-year-old acknowledged, “The idea of priesthood was never in my mind and was never something that I ever thought of doing. Having received so many graces from (that) mission trip really opened my eyes and heart to the gift God had given me.”

But that discernment also took a few turns. Deacon Garcia said he earlier attended the seminary before this time around and needed to take a break. He then worked at St. Ignatius of Loyola Catholic Church in Spring for two years helping with Liturgy and Sacraments.

“I worked at the parish during the break and realized there that God’s call was irrevocable,” Deacon Garcia said. He returned to the seminary.

A family of vocations

“I remember praying the Rosary as a family in Spanish when I was a child with my grandmother, who didn’t speak English,” Deacon Ramirez said.

Although inspired by his family and growing up in a home where prayer and faith played important roles, it was his senior year of college at Texas Tech University that Deacon Ramirez opened to the idea of priesthood.

“In 2009, at Texas Tech University, I was at a Sacrament of Reconciliation when I heard a call from God, actually the priest confessor, who planted the seed by saying ‘consider the priesthood,’” Deacon Ramirez

The 34-year-old said he was surprised about his personal calling and began teaching at Catholic schools, including two years of Spanish classes at St. Rose of Lima Catholic School in Houston.

He continued his discernment, through prayer, clergy counsel and a spiritual director, eventually applying to the seminary in 2015.

“I realized how blessed I am because I’ve grown closer to God and have come to a better understanding of myself,” Deacon Ramirez said.

Keeping up with their seminary studies, prayers, individual and spiritual development while still balancing their personal life has not been easy.

Deacon Meyer said, “It’s always a struggle. But it is important not to view any of these things as competing with one another. I am so thankful for every person that God has put into my life.”

A positive improvement for this group was being among the first seminarians to live in the new residence halls at St. Mary’s Seminary on Memorial Drive. Donations replaced decades-old facilities that were cold in the winter and steamy in the summer.

Deacon Meyer called it an upgrade.

“We enjoyed having all the seminarians in one dorm. Because of the size of the rooms, there is also more room for fellowship. We can fit multiple chairs and even a small table in our rooms. We have space for the small conversations that lead to great conversations.” Meyer said.

Growing up Catholic and raised in Sugar Land, Deacon Meyer, along with his identical twin brother Kevin and younger sister Kate, attended Mass every Sunday with their parents, Dave and Eilis Meyer.

“I am very thankful that my parents raised us to understand our commitment. They made great sacrifices to send us to Catholic school, and they have always been incredibly supportive of my vocation,” he said.

As part of their ministries, the transitional deacons served at parishes prior to their ordination to the priesthood.

Deacon Ramirez served at Blessed Sacrament Catholic Church in the Second Ward, where he preached and served at Masses.

Deacon Meyer served at Sacred Heart in Conroe, which was a “great opportunity to serve Mass, to preach, to baptize, and to minister to the people of God.”

Starting on the day of their ordination to their priesthood beyond, the three young men are excited but also realistic.

They are scheduled to celebrate their first Mass as priests the day after ordination. Deacon Meyer will celebrate an 11 a.m. English Mass on June 5 at St. Laurence in Sugar Land, while both Deacon Garcia at 3 p.m. and Deacon Ramirez at 11 a.m. will celebrate Spanish Masses at Prince of Peace.

“A priestly ordination is always a beautiful gift for the Church,” Deacon Meyer said, recalling how moved he was when he first attended one in college. “It is going to be surreal to be one of the men being ordained, I am humbled by the calling and moved by the support that I constantly receive from priests and the entire faithful.”

After June 4, the three will celebrate Masses, hear confessions and minister in a whole new way, something Deacon Meyer said.

“I have been waiting so long for this. As many priests have told me, it will be the most memorable day of my life. But the real gift is the new ways I will be able to participate in the life of Christ,” he said.

Deacon Garcia served as a transitional deacon at the Co-Cathedral of the Sacred Heart in Houston.

Deacon Garcia said, “A desire for service was born from this encounter, and with the help of the Blessed Mother and Holy Mother Church, I hope to be of service to the people by sharing in the ministerial priesthood of Jesus Christ. I commend myself to your prayers, and please be assured of mine for you all.”

And Deacon Ramirez, along with his family of many vocations, hopes to continue helping countless souls.

“Confession is very dear to me considering I received my call during that Sacrament itself,” Deacon Ramirez said. “Our society needs reminding of how good, how loving, and how merciful our God is.”