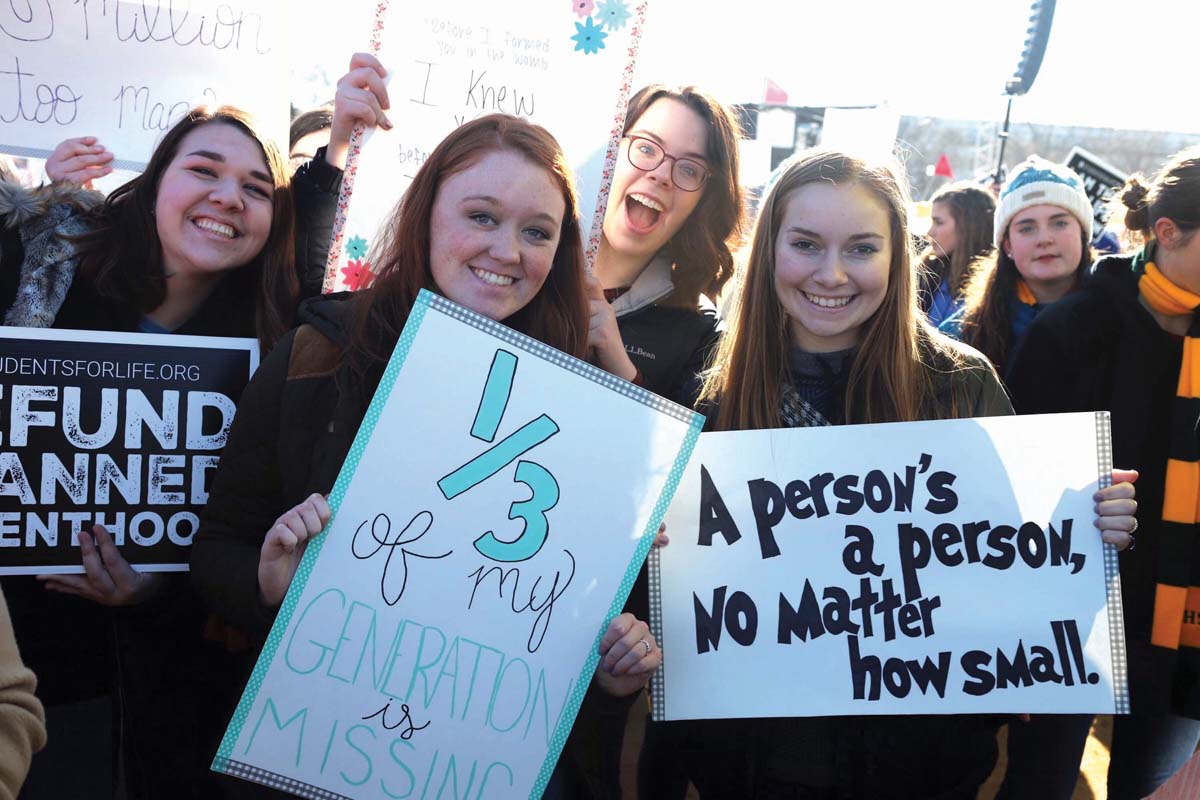 Young pro-life advocates and leaders march during the annual March for Life rally Jan. 19 in Washington. Photo by James Ramos/Herald.

WASHINGTON, D.C. — A tall figure, Billy Olson looked small inside the Basilica of the National Shrine of the Immaculate Conception in Washington, D.C. The Basilica’s new Trinity Dome towered over the director of pastoral ministry at Strake Jesuit College Preparatory and his students as they waited for the Jan. 18 Opening Mass for the Vigil for Life, surrounded by crowds of others squeezing to find any available space to attend the Mass. Daniel Cardinal DiNardo was joined by several other con-celebrants, including one apostolic nuncio, three other cardinals, 262 priests, and assisted by 62 deacons and 456 seminarians from across the U.S.

The next day, the group would join 100,000-plus for the annual March for Life, where President Donald J. Trump and House Speaker Paul Ryan, would address the March. President Trump said that “unborn every child is a precious gift from God,” while Speaker Ryan encouraged attendees to speak and dialog with compassion with others.

For Olson, seeing his students stand up for life, to see abortion as not a woman’s issue, but a human rights issue, is a “beautiful witness,” the 26-year-old said.

For Carlos Cerda, president of the student pro-life group Crusaders for Life at Strake Jesuit, making that witness is an obligation.

“I just feel that my generation has become the generation of waste,” the high school senior said. “It just seems to think that everything is disposable, and it’s even moved on to human life. I think that battling against that, showing the truth of the dignity of the unborn, it’s especially tough to communicate to younger people who have been fed perspectives on the issue that’s kind of twisted and not really accurate. I think that just moving past those and really having a good discussion about the issue, it’s probably most tough about being a young pro-lifer.”

Showing the truth and dignity of the unborn is “just doing what Christians are called to do,” Jenna Salazar, president of the Celts for Life student pro-life club at the University of St. Thomas in Houston, said.

“If anyone came that just didn’t believe that young people cared about being pro-life, they would be astounded to see the number of young people,” she said. “Middle school, high school, college, young adult life. It’s really, really great, and a lot of people don’t see that and they want to tell Millennials to just stop talking cause they think that we don’t know what we’re talking about. And it’s unfortunate.”

She encouraged young people to know, especially college students, to understand life issues like abortion, because situations will arise, she said. In her own circles, on separate occasions friends reached out to her because they knew she was pro-life and sought her help.

Salazar said the Opening Mass was an inspiring start to the March for Life.

“This one was all the more special because they were just numerous, like countless, thousands of young people and even like older people. And it was just really, really great,” she said. “Everyone coming together to pray for one single solitary goal, which is an end to abortion, the sanctity of all human life. And I just thought that it was really beautiful and really powerful. I know God appreciates what we’re doing.”

Andrew Schaeperkoetter, a 31-year-old theology teacher at Houston’s Strake Jesuit, said the hardest thing about being young and pro-life are “the caricatures that are thrown around, that the pro-life movement doesn’t care about women, the pro-life movement doesn’t want to help,” which he said distraction from the message that “we love these women, we want to help these women.”

Schaeperkoetter, who lost his family home during Hurricane Harvey and still lives out of suitcases, said he’s excited by seeing his students’ eager participation.

“It’s warmed my heart as a married man as we try to grow our family,” he said. “The pro-life movement, it takes a different air when you’re an adult than as a child, or a college student.”

Schaeperkoetter said it’s not a vacation either, and a trip that has a cost and sacrifice, “but it’s important enough for them to make this witness” and understand the need for a “more consistent and more rich life ethic.”

Olson sees a pro-life future: “Not only that but that young people are going to create a culture that is truly pro-life, not only in our laws but in our culture as well.”

Olson said he encourages his students to get involved “because their voice does matter, and their opinion does matter,” he said. “They’re not the future of the Church, but they are the Church right now. And I believe that because of that it’s important that they get involved, that they march, that they stand up for life and make their stance known.”

In his message at the start of the Opening Mass, Donald Cardinal Wuerl of Washington welcomed the “many, many, many” young people, like Schaeperkoetter, Olson, Salazar and Cerda.

“Your presence here bears great testimony to the importance of the Gospel of life,” he said. “Tonight, let all of us here in this great Basilica and all of us who are joining us in so many different ways, let us renew our own gratitude to God for his love and mercy in our own personal commitment to share hope as a pledge of our powerful defense of all human life.”