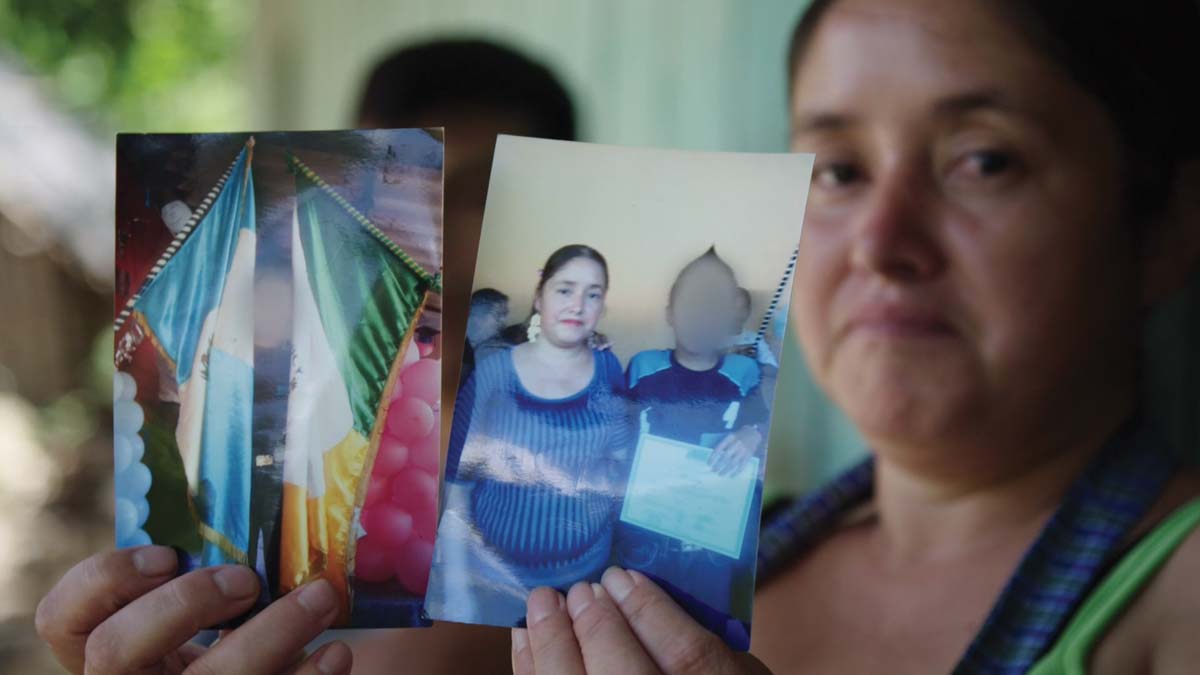 PBS’s FRONTLINE documentary “Trafficked in America” explores the story of trafficked Guatemalan youth, like Francisca Castillo’s son whose face is blurred to protect his identity. The documentary will be screened on Jan. 10 at the Co-Cathedral Centre in Houston. Photo courtesy of PBS.

HOUSTON — Victoria, a human trafficking survivor whose name has been changed to protect her identity, came to Houston undocumented from Honduras at only two years old with her older sister.

Growing up, she lived with her grandparents in Houston when she was lured in at 14 years old by an older 19-year-old boyfriend.

At first, he did all the right things, telling her that he loved her, buying her clothes and other gifts. But then he started taking her to parties where he gathered money from other men and told her to perform sex acts on them.

When she refused and started crying at one of the parties, he pulled a gun on her, threatening her and her family. She was too afraid to tell her grandparents and the “boyfriend” would always return her to their home at the end of the night to avoid suspicion.

This exploitation continued for more than a year, instigating her dropping out of school. Finally, 16-year-old Victoria was saved by a Harris County Sheriff’s Department and FBI task force investigating human trafficking. She was taken to a YMCA GED program where she studied and received her diploma, also receiving counseling from Catholic Charities certified therapists to help sort her life.

Griesmyer became Victoria’s attorney and they were able to process a visa and eventually a green card to make her a legal resident. But at 22 years old, Victoria still has issues to deal with, including keeping steady employment as the main breadwinner for her older sister, who is ill, and the sister’s children.

Most human trafficking victims are children, whether citizens or immigrants, who come from broken homes or are already homeless living on the streets facing stress beyond their years, said Griesmyer.

“Especially with young trauma victims, their developing brain is impacted and they use self-medication of alcohol or drugs,” she said.

Focusing on treating such trauma is one of the main events sponsored by CHI St. Luke’s Health as part of January being Human Trafficking Awareness Month.

“The Brain on Trauma: Using Physiological Cues to Guide Assessment and Relationship Building with Survivors of Human Trafficking,” a presentation by Naomi Azar, Ph.D., is scheduled Jan. 16 at the Texas Medical Center.

Kimberly Williams, project coordinator in the spiritual care department at Baylor St. Luke’s Medical Center, is organizing the events and said hospitals have become the frontlines of watching for patients who may be victims of human trafficking.

The training comes as the numbers continue to grow. There are now almost 50 million people trapped in modern-day slavery, according to the International Labor Organization. The issue is critical in Houston and Texas, which experts attribute to its closeness to Mexico, major interstate highways and the port.

The state ranks second only to California in the number of victims and Houston has more than any other city, according to a University of Texas study. The study estimated some 313,000 Texans are victims of labor and sex trafficking.

Health care providers of all kinds — in emergency rooms, health care clinics and private practices — are seeing abused trafficking victims, but at times fail to identify them, contributing to criminal activity and exacerbating physical and mental health problems for the population, according to research.

Williams said hospitals now benefit from new diagnosis codes — Catholic Health Initiatives, which owns Baylor St. Luke’s — led the campaign. The codes, rolled out in October, help track the number of victims, differentiating them from other type of abuse, and provide appropriate treatment.

“It is important for us to provide a safe environment for victims to come and receive care,” Williams told the Herald. “Our goal is to gently encourage healing and hope — a hope for a better life without fear of repeated trauma.”

Williams first learned of the modern trend to human trafficking nearly 10 years ago while living in North Carolina and attending a conference on the subject through her church.

“I thought, ‘I can’t believe this is happening.’ As an African American, and given the history of slavery in our country, it alarmed me,” Williams said in an article in the American Hospital Association.

She began to raise funds to help while she and her husband opened their home to victims in the Charlotte area and she now continues her passion for the work at Baylor St. Luke’s.

CHI St. Luke’s Health and Catholic Charities are also working together on events in January that will highlight Human Trafficking Awareness Month, including a screening of “Trafficked in America.” The Frontline investigation tells the inside story of Guatemalan teens forced to work against their will in 2014 on an Ohio egg farm. The screening is Jan. 10 from 6:30 to 8:30 p.m. at the Cathedral Centre, located at 1701 San Jacinto in downtown Houston.

For more information on this free showing, the brain trauma seminar and other related events that request registration, visit https://www.eventbrite.com/e/movie-screening-in-honor-of-human-trafficking-awareness-month-tickets-53570677338.