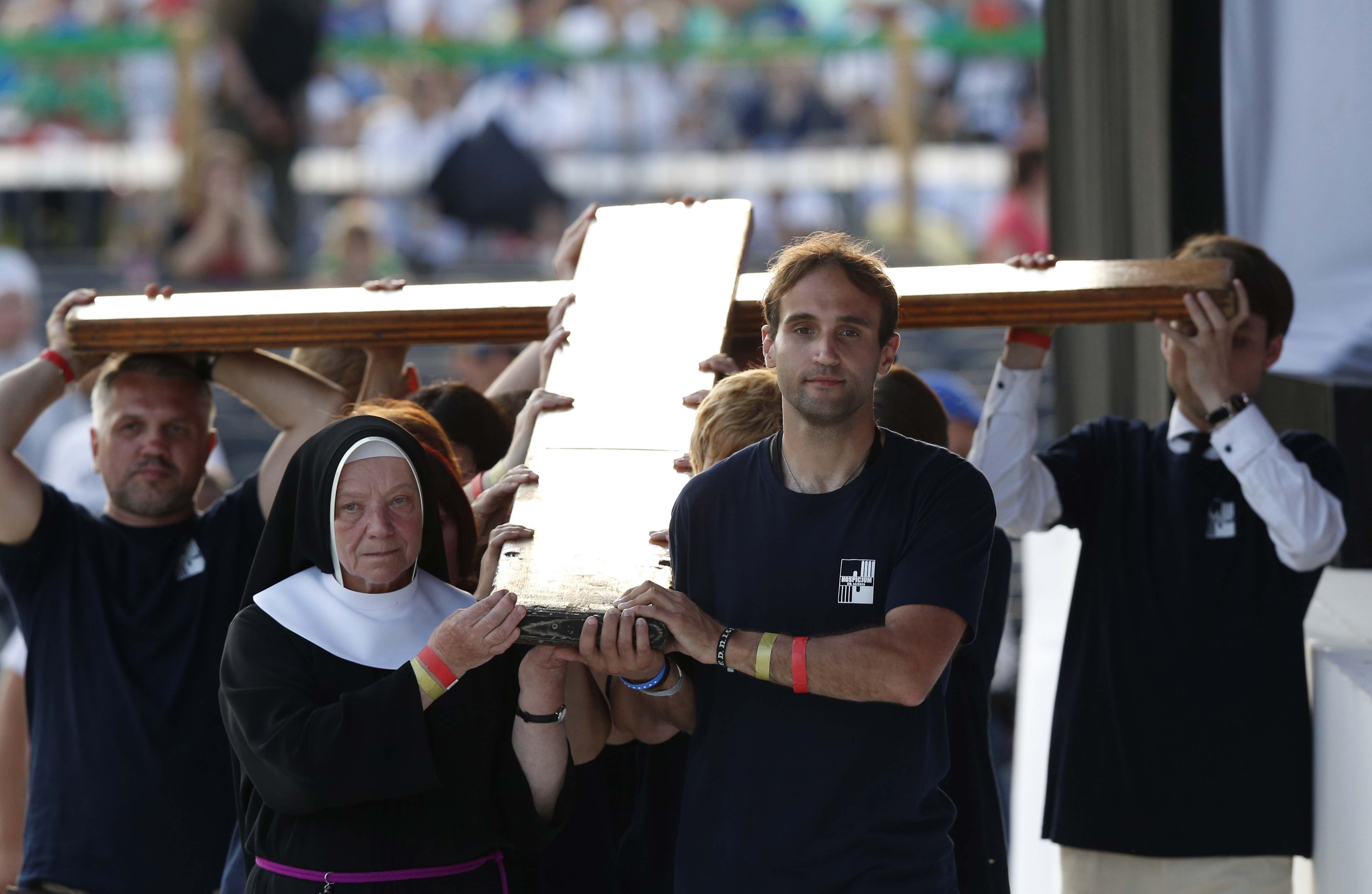 The World Youth Day cross is carried in procession during the Way of the Cross at World Youth Day in Blonia Park in Krakow, Poland, July 29. The cross and the Marian Icon will tour the U.S., including stops in Houston, Chicago, Miami, Washington and Los Angeles. Local faithful will welcome the cross with a celebration at the Co-Cathedral of the Sacred Heart on Aug. 23. CNS photo.

HOUSTON — The Archdiocese of Galveston-Houston will host the official World Youth Day (WYD) Cross and Marian Icon during a tour of the U.S. with a special Liturgy and celebration on Thursday, Aug. 23 from 6 p.m. to 9:30 p.m. at the Co-Cathedral of the Sacred Heart.

The free multicultural event will include veneration and procession of the WYD Cross and Icon, with music by the English, Spanish, Vietnamese, African Descent, Filipino and Chinese community choirs. Auxiliary Bishop George A. Sheltz will preside over a Liturgy of the Word. Highlights of the event include the Sacrament of Reconciliation, guided prayers, powerful witnesses and reflection.

“This will be a beautiful multicultural event and it is not just for the youth and young adults,” said Gabriela Karaszewski, director of the Office of Young Adult & Campus Ministry (YACM), “it is for people of all ages.”

This event is a result of a collaborative effort between the Office of Young Adult & Campus Ministry, Office of Vocations and Office of Adolescent Catechesis and Evangelization, she said.

The tour, which is being organized by the USCCB Secretariat of Laity, Marriage, Family Life and Youth, will travel across the country from Sunday, Aug. 19 to Monday, Aug. 27. The five stops along its U.S. journey will include, in order: Chicago, Miami, Houston, Washington, D.C., and Los Angeles.

Archbishop José Domingo Ulloa Mendieta, O.S.A., Metropolitan Archbishop of Panama and host of the next international WYD gathering in January 2019, extended the Latin American tour of the WYD symbols to include the U.S.

Panama will host the 16th World Youth Day Jan. 22 to 27. It will be the first Central American nation to host the massive event, which will include a music festival, dozens of seminars for youth and an expected four-day visit by Pope Francis.

Bishop Frank Caggiano of Bridgeport and WYD Episcopal Liaison for the USCCB, said, “We are grateful for this opportunity to host these incredible and unifying symbols in our country. I hope that young people and young adults will have an encounter with Christ and his mother Mary through the Cross and Icon, just as many have during World Youth Day. This summer tour is also very timely because August 2018 marks the 25th anniversary of the last time the pilgrim cross made a journey across the United States in advance of WYD 1993 in Denver.”

The cross has traveled around the globe since 1984, when St. John Paul II gave it to young people. It has been part of every WYD celebration beginning with the first official WYD event in Rome in 1986.

In 2002, the cross came to Ground Zero in New York City for a brief visit to bring comfort to the nation’s young people in the aftermath of the 9/11 terrorist attacks. In 2003, St. John Paul II presented the world’s youth and young adults with a Marian Icon, under the title of Salus Populi Romani, which has accompanied the WYD Cross for the past 15 years.

The icon of Our Lady of Salus Populi Romani is the most venerated image of the Virgin Mary in Italy. The title “Protectress of the Roman People” dates back to the events at the end of the sixth century, when the inhabitants of Rome suffered from a plague.