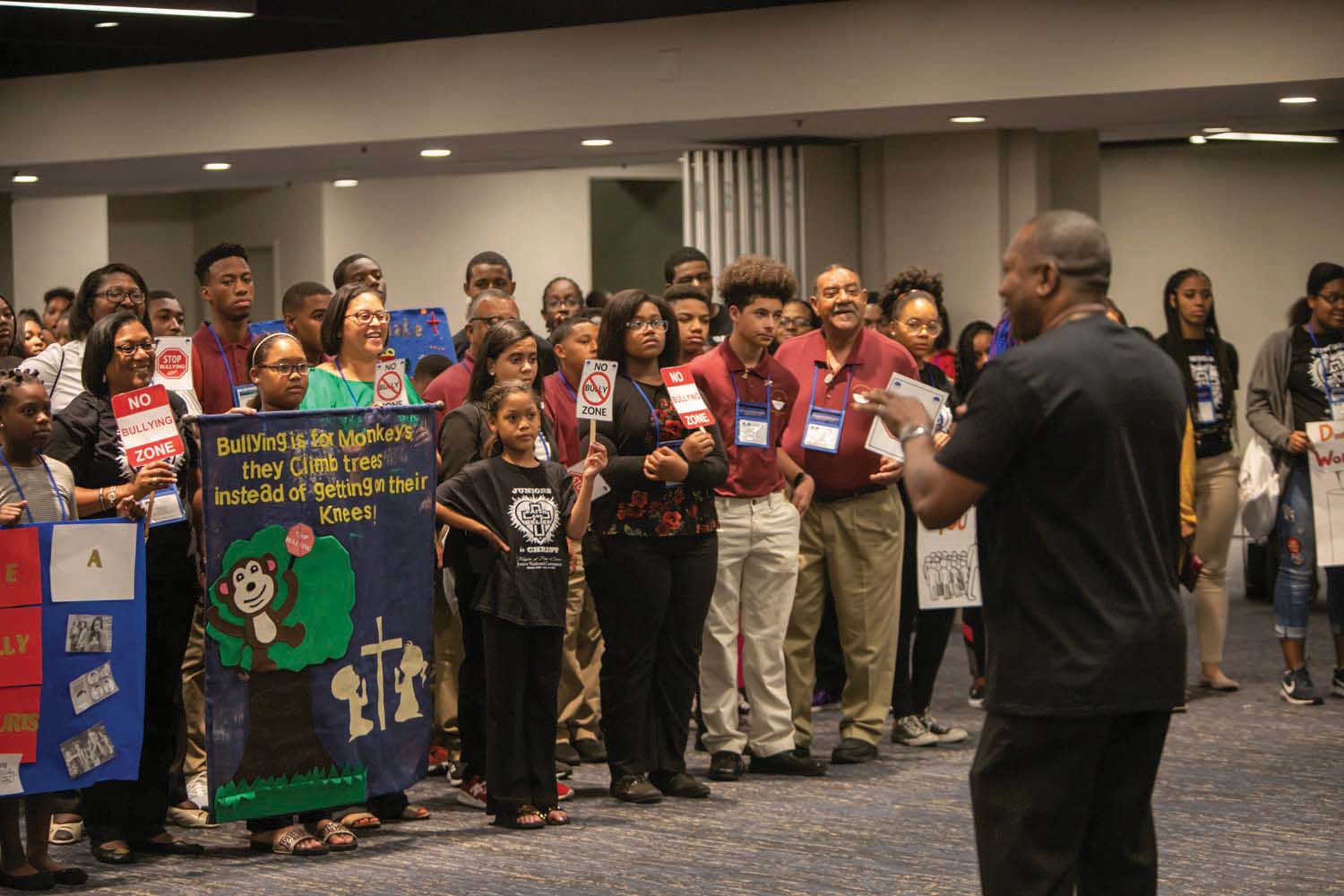 HOUSTON — Focused on tackling social justice issues such as bullying, at least 600 youth from the Junior Knights and Ladies of Peter Claver gathered at The Westin Oaks Hotel in the Galleria for their 23rd biennial convention July 11 to 14.

An effort spearheaded by Kennedy Wiltz, a 16-year-old Our Lady Star of the Sea parishioner in Houston, and 17-year-old Carrington Guillory of Sacred Heart of Jesus parish in Lake Charles, Louisiana, the event marked a turning point for youth division of the Knights of Peter Claver (KPC), and for the two themselves.

Wiltz, the Junior Supreme Lady who leads the female youth division of the Ladies Auxiliary, and Guillory, her Supreme Knight counterpart, chose the issue due to their own personal experiences in school and peer community.

The National Education Agency said that racism, hate and bullying can be prevented by building a culture that can intervene before incidents happen and handle them appropriately if they do.

The rally opened with a march of all the attendees, who carried a variety of banners with anti-bullying messages. Two special guest speakers followed: Shonnie Murrell, a multi-instrumentalist and BET reality star, and Alex Gotay, director of campus ministry at St. Thomas High School.

Murrell shared her experiences of being bullied while she drummed her way to being the highest leader for Grambling State’s marching band. The experience helped her to grow as a person and achieve her dreams of working with major hip hop stars. Gotay shared his own testimony and encouraged the youth to find their identity in Christ.

KPC Supreme Knight James K. Ellis said the social justice rally was an effort to instill Catholic values in the youth so they can appropriately and safely call out bullying in their own communities.

He also saw the convention as an opportunity to rally young people at a time when many youths are leaving the Church.
“This is so enriching to see that we can capture the attention of young Catholics,” Ellis said. “And to teach them some values about things that they’ll go on to use in life” like democratic procedures, and other civic skills. Ellis said priests, and men and women religious also attended to raise awareness for vocations, especially in African American youth.

Both Wiltz and Guillory said they found the effort to produce the convention both challenging and convicting.
Being a young Black Catholic, Guillory said, “means a lot.” “You see the social justice issues... each and every day, and maybe sometimes we see it, but we don’t speak out on it.”

As the youth division’s eminent leaders, he said they see their roles as the opportunity to be the megaphone and voice the concerns of Black Catholics like themselves.

“It’s important that we’re black, and we’re all black together, but that we are all youth as well,” Wiltz said.

She said they experience the same challenges that other young people face, but as Junior Knights and Ladies, they have the richness of the Catholic Church’s teachings and leaders to help them “discover it at their own time.”

To other young people, especially after co-hosting the convention with Guillory, Wiltz said, “don’t doubt yourself, because that’s what I do a lot. Don’t be hard on yourself when you make mistakes, because things happen. You’re human, you’re entitled to mistakes.”

Guillory agreed and said, “Just because you have a title doesn’t mean you have to be perfect 24/7. No... You’re going to make mistakes... But use that to motivate you, to get deeper in your belief.”

When Guillory encountered challenges, he soon realized “God’s got me” and to “sit down... pray... and talk. Let’s do this first.”

Kennedy’s pastor, Father Stephen Sohe, SSJ, of Our Lady Star of the Sea, said seeing the youth gather was “everything” to him.

He saw the convention as a way for the youth to be part of the Church “and be proud of it.” The youth “are a gift,” he said. “They celebrate their own gifts to the Church... While they still may have a long way to go, I see hope for tomorrow among these youth.”

Founded in 1909, the Knights of Peter Claver was created to offer African-American men a venue to practice the Catholic religion. The organization has flourished with more than 17,000 members across the country and the creation of a Ladies Auxiliary and junior divisions. In Galveston-Houston, there are at least 1,875 members.