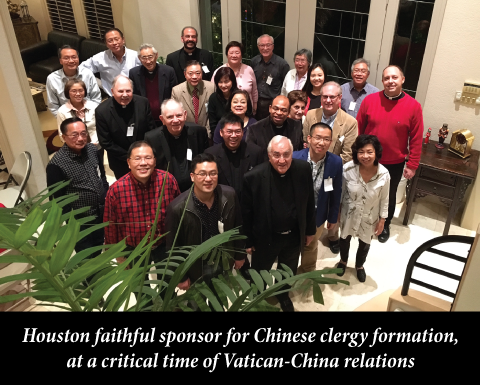 Father Yifu Lyu (front, center) completed his year-long English intensive program. He is the first and only priest from China at present who is pursuing his formation in Houston. Photo courtesy of Luke Liu.

HOUSTON — Days before Christmas, a group of Church leaders from the Archdiocese of Galveston-Houston gathered together to celebrate the first steppingstone of Father Yifu Lyu: The successful completion of his nearly a year-long English intensive program.

Father Yifu is expected to begin his Master of Arts in Faith and Culture this month at University of St. Thomas. Father Donald Nesti, CSSp, retiring director of The Donald S. Nesti, CSSp Center for Faith & Culture at the University of St. Thomas, and Father Trung Nguyen, rector of St. Mary’s Seminary, as well as some faculty members from the Seminary and parishioners from Chinese communities assisted in making the milestone possible.

“Father Yifu Lyu is undoubtedly the first and only priest from China at present who is pursuing his formation in Houston,” said Father Nesti, who chairs the Board of the Spiritan China Education Fund for Advanced Formation (SCEFA). “We feel morally obligated and proud to support the hopeful Church in China through what we can do locally.”

SCEFA presents its educational mission to bring Chinese priests and religious to Houston for advanced study so they can return to better minister, according to the group’s Facebook page. The degree Father Yifu pursues is designed to form people in their professional lives, community leaders and Church personnel capable of assisting others in the integration of personal and communal faith and the American way of life, as faithful citizens.

“I want to study again because I see the spiritual hunger and thirst of my people... My five years of intensive pastoral care experience in China before coming to the USA made me realize that I need to increase my ability to help them face today’s social and cultural challenges,” said Father Yifu, 35, who was born into a six-generation rural Catholic family in the east coast of China. Because of initial budget constraints, home-visit flight tickets during the course of his three-year program were not planned.

“Though I miss my family and my parishioners, I will conquer it because God’s bigger plan awaits me,” said Father Yifu. “Besides, I am warmly supported by the Fund, The Ascension Chinese Mission, and St. Mary Seminary (which provided room and board during his stay in Houston). They treat me as their brother, son and grandson.”

SCEFA was initiated early last year by Father Nesti, Peter Tan, Sir Knight and Master, and Luke Liu, a teacher at St. Theresa Catholic School in Sugar Land who is believed to the only first-generation Chinese immigrant across the Archdiocesan school system. Father Nesti was one of a group of 21 educators who made a pioneering trip to China in 1982, the year China reopened its door.

Currently, board members who love and understand China are volunteering hard to raise funds to support their first student and more to come. With the goal set to be $100,000 this year, the first major fundraiser is Father Matteo Ricci China Education Dinner, which is scheduled to be on Wednesday, April 19, and features the presence of Daniel Cardinal DiNardo.

An Italian Jesuit priest, Matteo Ricci was the first European to enter the Forbidden City of Beijing in 1601 when invited by the Wanli Emperor, and one of the founding figures of the Jesuit China missions. His 1602 map of the world in Chinese characters introduced the findings of European exploration to East Asia.

He converted several prominent Chinese officials to Catholicism, such as his colleague Xu Guangqi, who aided in translating Euclid’s Elements into Chinese as well as the Confucian classics into Latin for the first time.

“Father Ricci is not only a breakthrough missionary, but also a spearhead of West-East exchange,” said Tan. “Today we draw on him to inspire our zeal and strategies when evangelizing the great Chinese nation.”
Another component of SCEFA’s mission is to educate the public about the Church in China. The Second China Church Forum is scheduled to take place around the April Dinner. This one-day event will bring together those concerned about the Church in China to talk about the historical facts that relate to cross-cultural dialogue and foreign missions, and contemporary issues that affect US-China, Vatican-China relations.

“This and next generation American Catholics should transcend their parochial life and benchmark against their predecessors who took their initiative to reach out to those in the Far East,” said Liu, who directed the 2015 Forum and serve on the Boards of both SCEFA and the U.S. Catholic China Bureau. “A better China is critical to American democracy, world peace and human dignity.

For more information regarding SCEFA operation and events, contact Luke Liu at lukeliuhang@gmail.com.