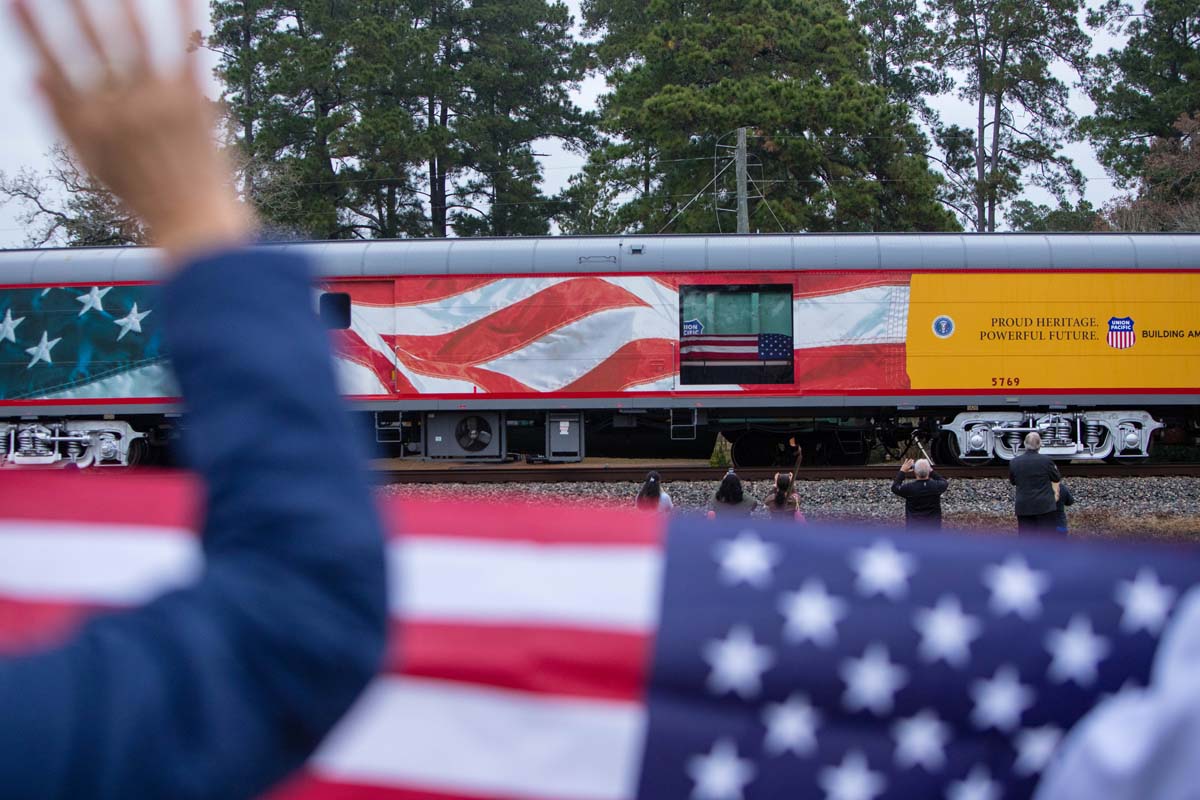 HOUSTON — For Sister Mary Brendan O’Donnell, C.V.I., it was a baby afghan she made for the newborn child of George H.W. Bush and his wife, Barbara Pierce Bush.

Like many around the world, and especially in Houston, the lives of a consecrated woman religious and a Catholic priest were changed because of the nation’s 41st president.

Sister O’Donnell beamed as she remembered the soft colorful blanket. She had crocheted it herself and hand-delivered it to the Bushes for one of their newborn children at a Houston Astros baseball game.

Decades later, she found herself in line with thousands to pay her respects to the late president at his own parish church, St. Martin’s Episcopal Church in Houston, the night before his Dec. 6 funeral. Daniel Cardinal DiNardo and Archbishop Emeritus Joseph A. Fiorenza would both sit in the front row for the late president’s funeral services.

Sister O’Donnell said she was there to represent her convent, the Congregation of the Incarnate Word and Blessed Sacrament, and the sisters’ prayers for the repose of his soul.

“The sisters are praying for him every day,” she said. “For him and the consolation for his family, which is even harder for them right now.”

“I loved President Bush. Truthfully, he had been very special to me,” said Sister O’Donnell, who is Irish by birth and nearly 90 years old. She has lived in Houston for 70 years with her congregation.
She had missed Barbara’s funeral arrangements after the first lady’s April 18 death, and made sure to attend Bush’s public viewing in Houston.

Inside St. Martin’s, Sister O’Donnell made the Sign of the Cross and clasped her hands in prayer when she walked by Bush’s casket, draped with the American flag.

Sister O’Donnell and Bush had several things in common: their love for their faith, a strong heart to serve and a passion for the game of baseball.

When George and Barbara made Houston their home nearly 60 years ago, the couple made St. Martin’s their parish church; they prayed together there for more than 50 years. During those decades, many say Bush served with the common and public good with a quiet, confident leadership.

It was in the ballpark, where Bush and Barbara had front row seats, where Sister O’Donnell and her fellow sisters grew close with the Bush family attending many games over the years. Bush, himself a former player and then ardent fan, had led Yale to the two College World Series as captain.

He threw left-handed. Sister O’Donnell was a longtime history teacher at Incarnate Word Academy, which is across the street from Minute Maid Park where the Astros play.

“He was a great, grand man,” Sister O’Donnell said. “Honest and humble.”

The next day, standing outside his parish of St. Matthias Catholic Church in Magnolia, where he is pastor, Father Nguyen stood watch for the Bush’s funeral train to pass Dec. 6 as it headed towards the George H.W. Bush Presidential Library and Museum at Texas A&M University in College Station.

Wearing a cowboy hat and red, white and blue socks, he said he was grateful to Bush and his administration for allowing him to enter the U.S. as a refugee escaping Communist Vietnam in 1989.

He remembered hearing his name over his Malaysia refugee camp’s speakers, a summoning that would begin his refugee process to the U.S.

He’d be sent to Texas, the United Nations worker told him. He didn’t know much about Texas, but he knew there were cowboys and horses from the one cowboy Hollywood film he saw.

Now, a priest of the Archdiocese of Galveston-Houston, he leads a growing northwest Houston parish, one whose patriotic parishioners turned out in force to honor Bush as his funeral train would pass directly in front of the church.The rail procession had already passed Frassati Catholic High School.

The Union Pacific Railroad passes through the heart of Magnolia, a small city surrounded by farm land and Texas trees.

Father Nguyen said he focused that morning’s homily on being thankful to God for His many blessings.

“To come here (to the U.S.) is a miracle,” he said. “I never thought I would live in America. I owe this country and President Bush a big thanks for being so generous to immigrants.”

Despite a busy parish — a Christmas party was cut short and a funeral delayed so guests could view Bush’s train — Father Nguyen joined many of his parishioners and moved closer to street’s edge that ran parallel to the train’s tracks.

“I see everyone here. You see all different cultures,” he said. “We love to honor him and respect him.”

“And I love my priesthood. It’s a small family, here in Magnolia,” he continued. “Everybody loves each other. We’re a very friendly people here — I love this little town.”

Deacon Bush Prewitt, a two-time graduate of Texas A&M, said he was there to honor a president that “carried himself with a dignity” not as easily found in leaders today.

“We’re united together and join and say [to Bush], ‘Well done, good and faithful servant,’” he said.
Deacon Prewitt hoped all would be inspired by Bush’s legacy of service and prayed that God would bless the nation’s current leaders and that “they work together for the good of America.”

When Bush’s blue and white train emerged from behind the tree line, the little city of Magnolia grew silent. American flags held high, thousands quietly honored their late president in his casket, clearly seen through glass windows. Then under the gaze of the parish’s Sacred Heart of Jesus statue facing the passing train, Bush’s casket moved forward to College Station, to finally join his wife and daughter Robin in their family resting place.