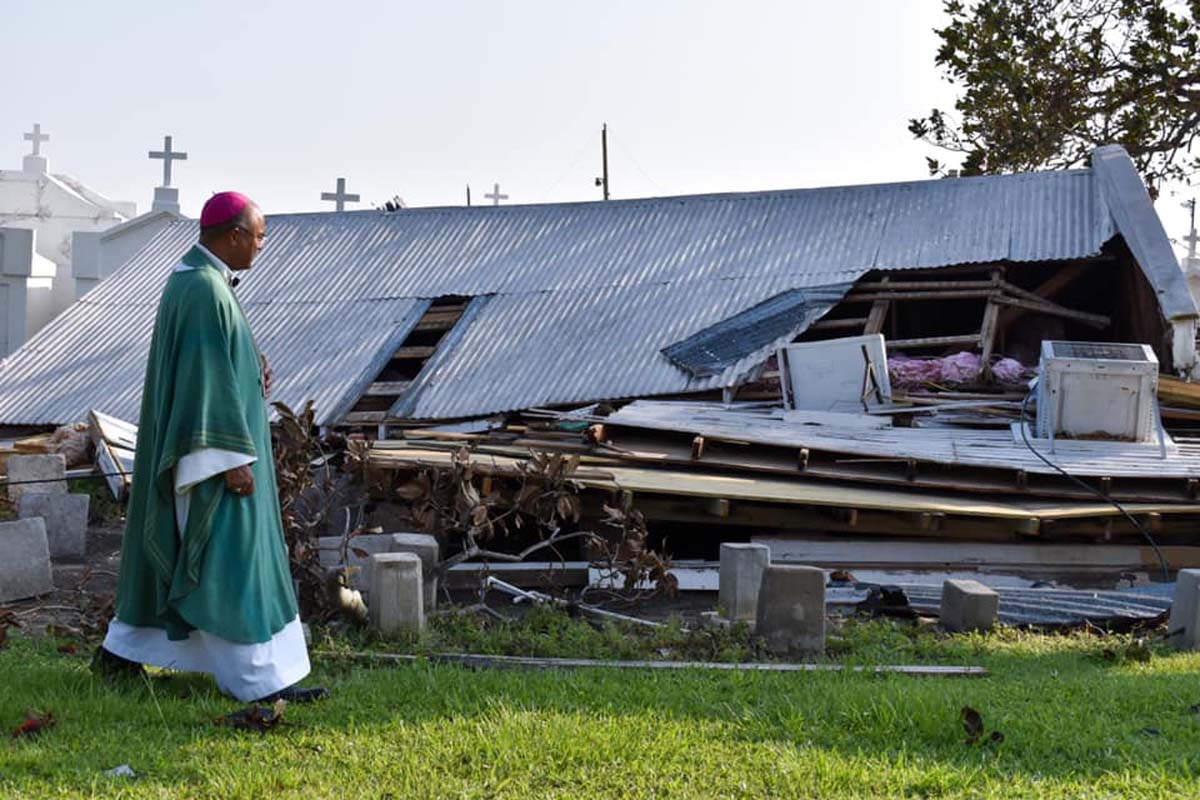 HOUSTON — As soon as the wreckage from Hurricane Ida cleared, Houston parishioners rushed to the aid of struggling neighbors across the Sabine River.

They went individually and in groups, sharing relief aid with Louisiana evacuees who fled to Houston when the Category 4 storm pushed into the Cajun Gulf Coast.

It was often by chance, a meeting at a gas station, bumping carts at the grocery store or just even noticing the Louisiana license plates in a McDonald’s parking lot. Houstonians opened their hearts and led with faith, just as many Louisiana natives did for Texans when Hurricane Harvey flooded Texas in 2017.

A Rosharon family who attends St. Angela Merici Catholic Church raised more than $3,000 to fill up their livestock trailer with relief items.

With the goal to reach the hardest-hit communities, they made their way past Houma and arrived in LaPlace, where they saw hundreds of snapped power poles, downed trees and shattered buildings.

Catholic parishes mobilized to support Louisiana evacuees, welcoming many at weekend Masses, offering goods and resources for those families homebound after the storm left.

Catholic Charities of the Archdiocese of Galveston-Houston quickly opened a fund to support Louisiana evacuees, which offered $50 payments to Louisiana residents who were affected by Hurricane Ida. 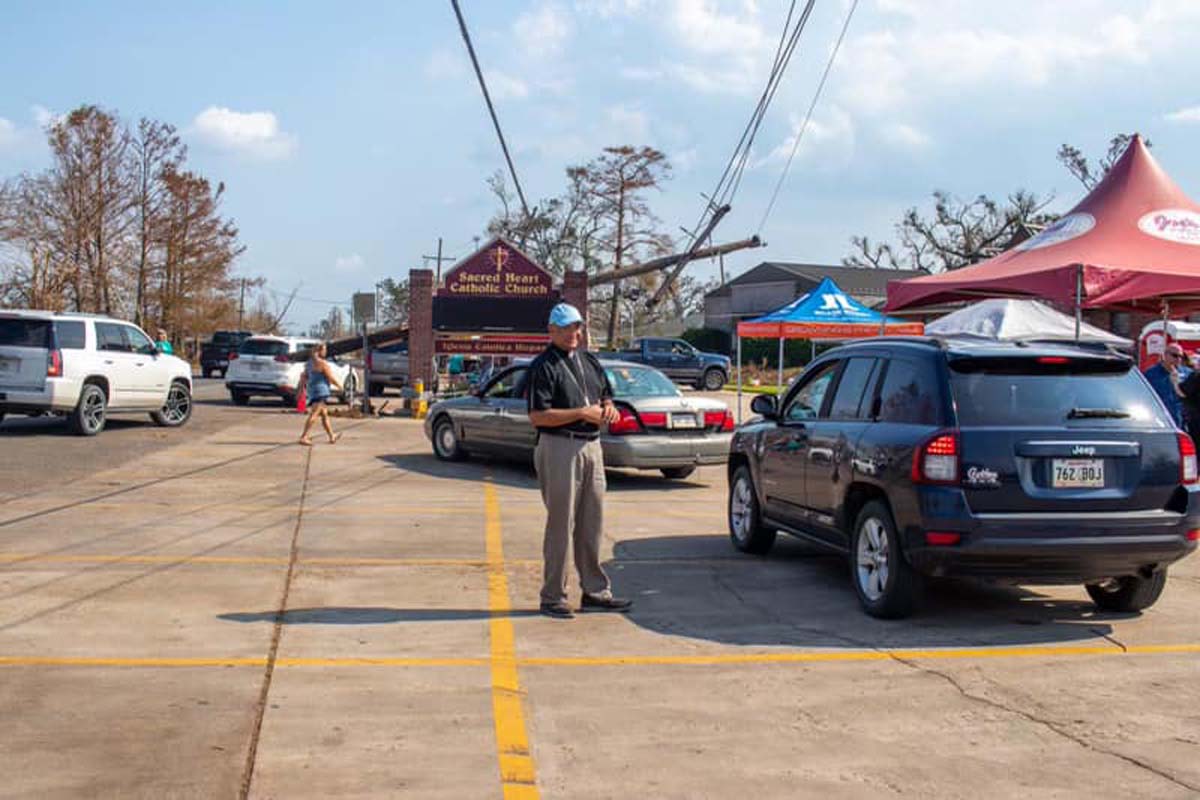 In the Diocese of Houma-Thibodaux, Bishop Shelton Fabre celebrated an outdoor Mass for communities along the furthest bayous.

In Larose, he surveyed damaged church structures, many that housed hundreds of parish prayer vigils, gatherings and events for years. Now those buildings were reduced to piles of brick, concrete and metal.

Still, even without a physical roof, the Catholic faithful gathered for worship and Liturgy.

At the height of the power outages, government officials said an estimated 1 to 2 million were without electricity in the region. Many remained without cellphone service, and at least 26 deaths had been confirmed by Sept. 8.

Though the hurricane had torn through much of Louisiana as a Category 4 storm on Aug. 29, the remnants of Hurricane Ida later struck the northeastern United States, causing an estimated 50 deaths and flooding roads in New York, New Jersey, Pennsylvania, Maryland and Connecticut.

As levees in Louisiana seemed to have stood up to Ida’s wrath, many on social media urged the public to keep in mind that help would be needed in small agricultural towns, not just for damage to New Orleans.

Catholic dioceses and organizations soon were mobilizing to help.

Catholic Charities of Southwest Louisiana in Lake Charles offered thousands of hot meals for Hurricane Ida evacuees, remembering how they, too, had been helped by neighboring states during last year’s hurricane season.

Bishop David L. Toups, bishop of the Diocese of Beaumont, which suffered damage from Hurricane Laura in late August 2020, said, “[The diocese] has invited all of our priests and faithful ... to pray and intercede for our brothers and sisters in Louisiana. We stand with them in prayer during the storm and will stay by them to assist in recovery.”

Power utility linemen were a welcome sight for millions who were without power. An estimated 290,000 were still without power on Sept. 8, nearly two weeks after Ida made landfall near Port Fouchon, Louisiana.

Across the many bayous, at St. Eloi Catholic Church in Theriot, Lousiana, the winds pushed through the church’s large stained glass window, knocking down the brick wall that held up a statue of the Resurrected Christ. Just the head of the statue was visible among the brick rubble.

At several parishes, Bishop Fabre joined ministers and parishioners in distributing relief goods, like hot meals, toiletries, water, gas and tarps. Many in the community depend on the Gulf for income, in fishing and oil and gas industries.

Many Masses had been suspended in the region as residents prepared to ride out the storm or had evacuated. Eventually with the assistance of Bishop Fabre and local clergy, daily Masses resumed outdoors and wherever appropriate on church grounds.

The day after the hurricane, Lady of the Sea General Hospital in Galliano, Louisiana, reported that part of its roof had been ripped off by Ida’s winds. A highway collapsed in Mississippi as the storm made its way north.

“As the storm moves inland, it continues to hit communities in several states and causing damage” affecting multiple dioceses, said Archbishop José H. Gomez of Los Angeles, president of the U.S. Conference of Catholic Bishops, in an Aug. 31 statement.

“We entrust all our brothers and sisters in harm’s way to our Blessed Mother, and we ask for her continued protection and for her intercession in comforting those who are suffering,” he added.

Pope prays for those affected by Ida
Pope Francis offered prayers for the victims and families affected by Hurricane Ida.

“I assure my prayers for the people of the United States of America who have been hit by a strong hurricane in recent days,” the pope told pilgrims gathered in St. Peter’s Square Sept. 5 during his Sunday Angelus address.

“May the Lord receive the souls of the deceased and sustain those suffering from this calamity,” the pope said.

Many agencies are leading the way in providing Hurricane Ida relief. Several have Amazon wishlists and are accepting financial donations.