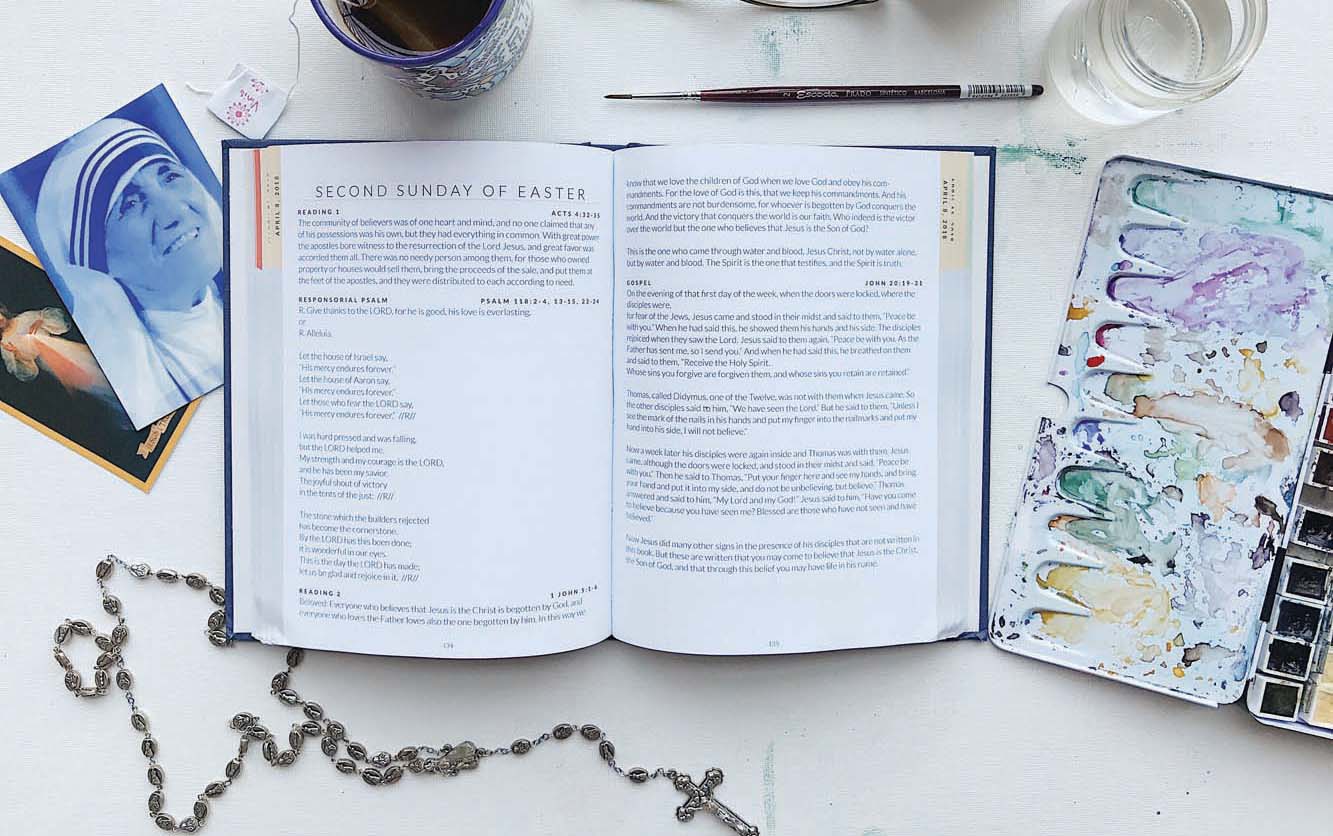 HOUSTON — When Kassie Manning and Christie Peters launched their Mass journal “Every Sacred Sunday” a little over two years ago, they had no idea what was in store. They also had no idea what they were doing.

“We had no business making a book,” said Manning, laughing. Manning is one of two co-founders of Every Sacred Sunday. She readily admits that she and Peters only had an idea, not a pathway to get there, “But we both felt God was calling us to this.”

The two met in a Bible study at Trinity University. As their friendship and study of Scripture deepened, they realized they needed a better way to connect with the Mass and sacred Scripture. They talked about Scripture in their study group and they prayed on their own, but they knew something was missing.

That’s when they latched onto the idea of a journal.

Peters, an art teacher and Every Sacred Sunday’s creative director, said they went and looked at journals in bookstores but they didn’t find what they were looking for. So, they made it.

After a year of planning, the pair dreamed up a journal designed especially for Catholics. Every Sacred Sunday includes the readings for each Mass of the year, following the liturgical calendar.

With space for Scripture and homily reflections, notes and prayer intentions, the hardbound journal is meant to allow users to not only use it during Mass, but also before and after to reflect on the Word of God. The book is the only one of its kind authorized by the U.S. Conference of Catholic Bishops, which provided and approved the language for the Scriptures that are in the journal.

When Every Sacred Sunday launched with a Kickstarter campaign to fund their initial production, Manning wondered if they’d even sell 500.

Even after the campaign went viral online and became the most successful Catholic-focused Kickstarter effort to date, the pair remained focused on helping others deepen their faith and their relationship with God.

“It’s about encouraging that habit to spend time with God and develop a more personal relationship,” said Manning.
“I hear from moms who tell me they use our journal to study the readings before Mass,” Peters said. “During Mass, they might be looking after their kids, so they can’t fully concentrate, but they’ve had some time beforehand to sit with Scripture. I love hearing that.”

Each journal includes artwork by Peters that mirrors the themes of the liturgical seasons. Peters, in her creative role, oversees the artwork and increasing social media presence Every Sacred Sunday has generated. Manning handles design — she taught herself how to format their raw materials into design software — and operational details like warehousing and shipping.

Today, the team is working on their third edition of the book. Preorders are expected to be available in the fall, with delivery right before Advent. The duo’s journey has been one that’s not only deepened their faith and prayer lives, but it’s also enriched the way they look at the world and their abilities.

“It’s helped me see that the Church is really alive,” said Manning. “And that we are part of this rich tradition. God has been so generous with us.”

“As a cradle Catholic, I had the gist of it,” said Peters of her faith background. “But as we put this together, I began to see the wisdom and the beauty in the liturgical year. It’s always there. God is always there. And that’s so important. I could not do this without God, without prayer, in my life.”

Peters grew up in Sugar Land and graduated from St. Agnes Academy. Like Manning, she graduated from Trinity University in 2012 and would go on to earn her master of arts in teaching from the university. She taught art in schools around Houston before leaving last year to concentrate on Every Sacred Sunday.

Manning was born in Houston before moving to Idaho during her high school years, eventually moving back to the Bayou City and marrying her husband. She also has a Ph.D. in molecular and biomedical sciences from Baylor.

The two run Every Sacred Sunday as a team, sharing the workload and playing to their own creative and organizational and artistic strengths. From the outset, they wanted a modern look for their journal, they wanted it to be printed in the U.S., and they wanted it to be an accessible way for people to approach Scripture. In addition to the hardcover book, Every Sacred Sunday has a thriving Instagram, and the duo recently launched an email Sunday Series with further reflections and commentary on Scripture readings.

“We’re still evolving,” said Peters. “We have a lot of ideas that we’re praying on and discussing.”

“People had no reason to think two 20-somethings could make this happen,” added Manning. “But we did, and we want others to be able to see that with God, you really can take that leap.”