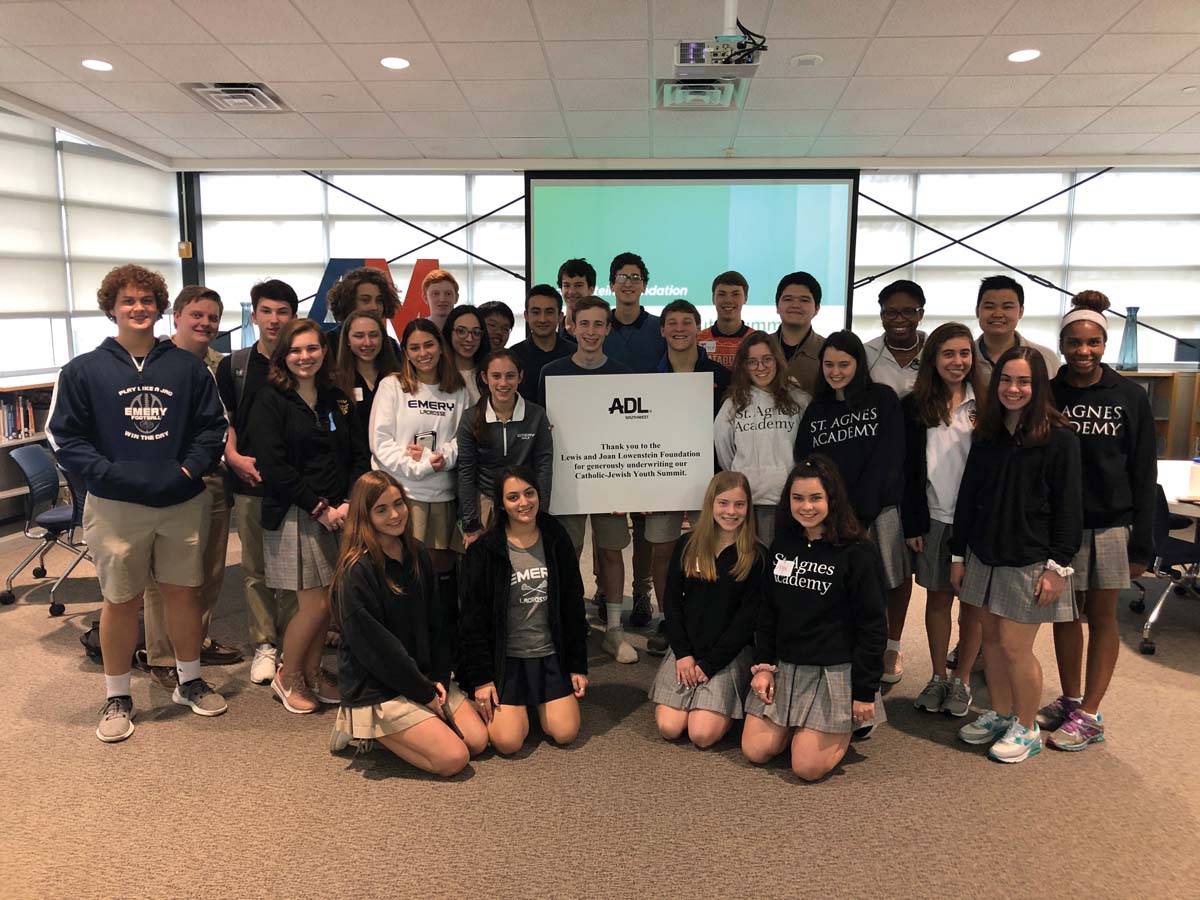 HOUSTON — Forty high school students from St. Agnes Academy, Strake Jesuit College Preparatory and the Emery/Weiner School spent two days learning about Catholicism, Judaism and how to put their religious values into action together at the Lowenstein Foundation Catholic-Jewish Youth Summit Feb. 20 and 21.

The youth summit, created by the Anti-Defamation League (ADL) in 2017, is now in its second year and is a collaborative effort between ADL’s education Director Susan Shaw, St. Agnes Academy’s theology department chair Christine Hernandez, and Emery/Weiner’s Director of Jewish Life Joe Weinstein-Sears, with help from theology and engineering teacher Andrew Schaeperkoetter of Strake Jesuit.

This year’s summit followed the theme “Sacred Spaces, Sacred World,” and began with a field trip to St. Anne Catholic Church in Houston and Congregation Emanu El, where student leaders explained their faith traditions as they led the group through parts of the facilities. The students ended the first day at the Rothko Chapel, where they spoke about the idea of a sacred space and shared time for reflection.

In the second day, students met at the Emery/Weiner School. The students shared about their own sacred spaces — not just the physical spaces in which they worshipped — but the spaces in their heart where they found and practiced their faiths.

Emma Stein of St. Agnes told the group she was happiest serving others, and connecting with other humans was “her favorite way to connect with God.” Stein found that connection most often at an elementary school where she volunteers.

Johnny Ly of Strake Jesuit said one of the places he connects with his faith is in his living room, when he looks at the photos of relatives who have died.

Throughout the second day, the themes of sacred spaces, individual’s faith traditions and connecting with the community resounded.

Students said they loved the youth summit, according to organizers.

Katelyn Needler, a junior at St. Agnes, said, “I think it’s a great opportunity to ask each other questions in a safe space and open the door to new conversations.”

Schaeperkoetter said “going to Catholic school can sometimes be insular. This is a tremendous opportunity to learn about faith and their forefathers in faith.”

In January, Pope Francis encouraged unity between the Jewish and Catholic faiths, according to Catholic News Service. The Holy Father wrote the introduction to a new Italian book of Christian and Jewish commentaries on passages from the first five books of the Bible, which are known collectively as the Torah or Pentateuch.

Pope Francis said the volume of commentaries, “The Bible of Friendship,” is an important tool for helping Catholics recognize the Jewish roots of their faith and for promoting concrete Catholic-Jewish cooperation in helping others.

“It is of vital importance for Christians to discover and foster knowledge of the Jewish tradition in order to understand themselves more authentically,” the pope said, and studying the Bible is an essential part of that effort.

Reading the Hebrew Scriptures together, he said, helps people discover the richness of the word of God.

“The common objective will be to witness together to the love of the Father throughout the world,” the pope said.
The Catholic-Jewish Youth Summit is sponsored by the Lewis and Joan Lowenstein Foundation. Shaw said the foundation and its sponsorship of the Summit provides “a wonderful opportunity for students to build bridges of understanding amongst different religious communities.”