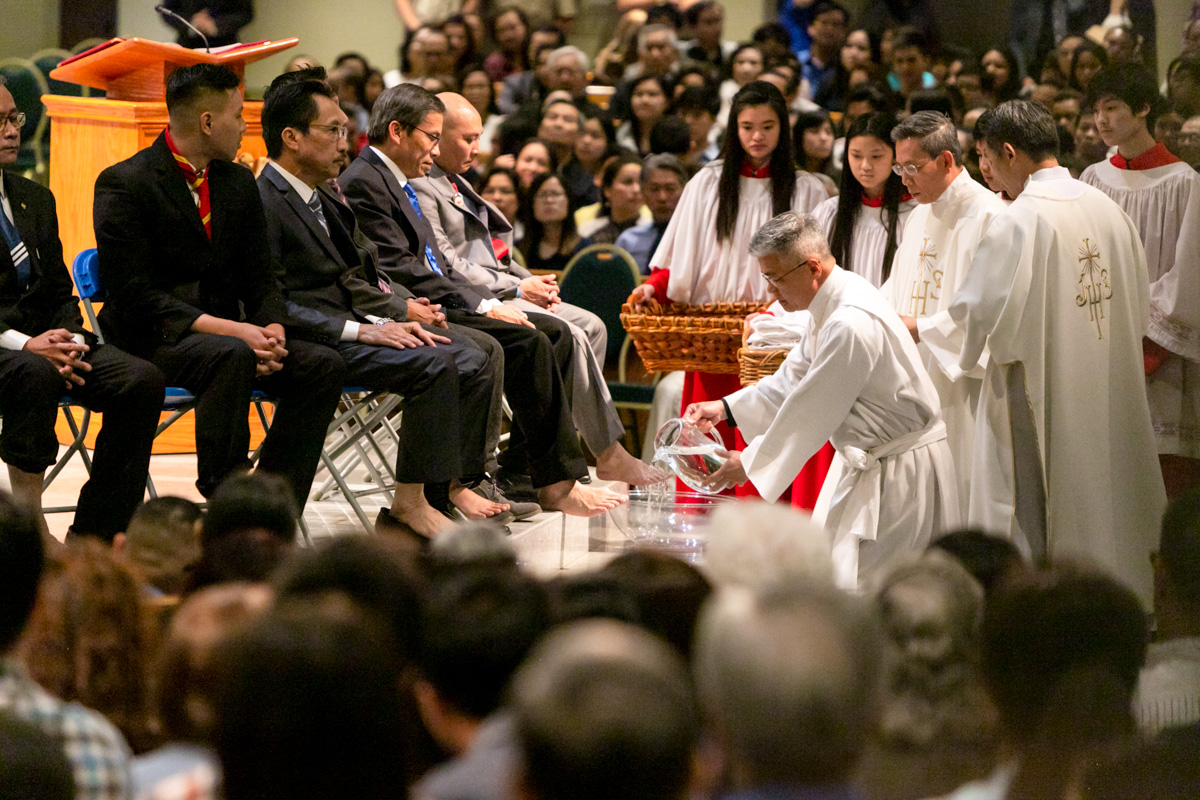 Father Thu Ngoc Nguyen, pastor of Christ the Incarnate Word Catholic Church in Houston, washes the feet of a parishioner during Mass of the Lord’s Supper on Holy Thursday, April 18. Father Nguyen is the vicar for Vietnamese Catholics in the Archdiocese of Galveston-Houston. Photo by James Ramos/Herald.

In the Archdiocese of Galveston-Houston, in preparation for the Paschal Triduum, the Chrism Mass was presided by Auxiliary Bishop George A. Sheltz on Tuesday, April 16.

At this Mass, where priests of the Archdiocese also gather to renew their promises, all of the oils used in sacramental ministry throughout the 10-county Galveston-Houston Archdiocese were blessed and the Sacred Chrism was consecrated by Bishop Sheltz. Daniel Cardinal DiNardo preached the homily for the Mass and attended the entirety of the hours-long Mass in choir.

On Holy Thursday, April 18, the Mass of the Lord’s Supper is held in the evening and begins the Paschal Triduum. This Mass commemorates the institution of the Eucharist and the priesthood, rooted in Christ’s commands to “love one another” (Jn 15:17) and to “do this in memory of me.” (Lk 22:19) To this end, many priests will perform the optional ritual of the washing of feet, which imitates the example of Christ who humbled himself to wash the feet of his disciples at the Last Supper.

On Good Friday, April 19 -- the only day of the year on which the Mass is not celebrated -- the faithful instead receive Holy Communion from sacred Hosts consecrated the previous night. The liturgical celebration focuses on the suffering and Death of the Lord as the Passion narrative from the Gospel of John is proclaimed and the Holy Cross is adored and presented before the people for veneration.

Calling to mind the time in which Christ was in the tomb, Mass is not celebrated again until the Easter Vigil, which takes place after nightfall on Saturday, April 20. The faithful gather after sundown to celebrate this lengthy Mass, consisting of four parts, which in ancient times would last throughout the night until sunrise as Christians kept “vigil” for the Easter dawn.

This year in the Archdiocese, 1,512 catechumens and 631 candidates will be brought into the Church through the Easter sacraments.

Throughout Easter Sunday, April 21, the Church celebrates the Resurrection of the Lord.