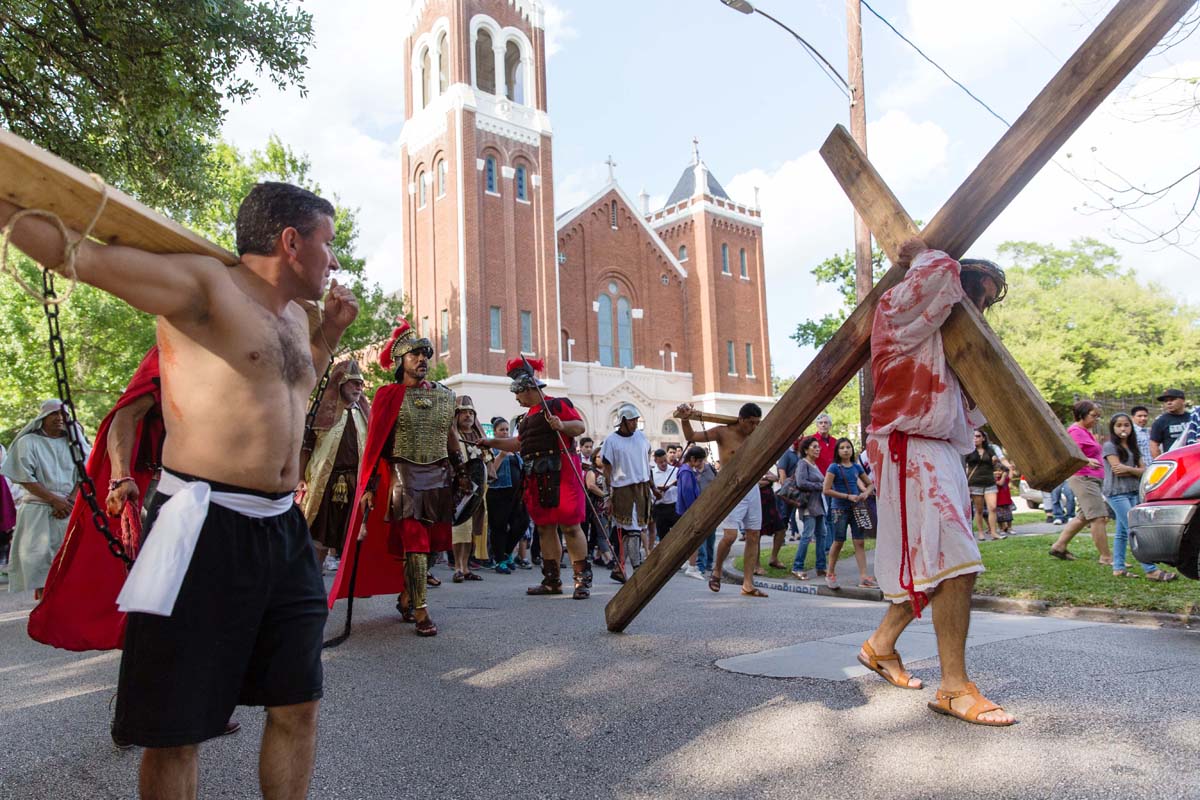 Actors depict the Passion of Jesus Christ as he is carrying his cross at All Saints Catholic Church on Good Friday in 2017. Many parishes across the Archdiocese host living Stations of the Cross, performed by parishioners of all ages. Photo by James Ramos/Herald.

In the Archdiocese of Galveston-Houston, in preparation for the Paschal Triduum, the Chrism Mass will be celebrated by Daniel Cardinal DiNardo on Tuesday, March 27.

At this Mass, in which the priests of the Archdiocese will also gather to renew their promises, Cardinal DiNardo will bless and consecrate the holy oils. These are subsequently sent to parishes and will be used in the upcoming year for the celebration of the sacraments of Baptism, Confirmation, Holy Orders and the Anointing of the Sick.

On Holy Thursday, March 29, the Mass of the Lord’s Supper is held in the evening and begins the Paschal Triduum. This Mass commemorates the institution of the Eucharist and the priesthood, rooted in Christ’s commands to “love one another” (Jn 15:17) and to “do this in memory of me.” (Lk 22:19) To this end, many priests will perform the optional ritual of the washing of feet, which imitates the example of Christ who humbled himself to wash the feet of his disciples at the Last Supper.

On Good Friday, March 30, the only day of the year on which the Mass is not celebrated, the faithful instead receive Holy Communion from sacred Hosts consecrated the previous night. The liturgical celebration focuses on the suffering and Death of the Lord as the Passion narrative from the Gospel of John is proclaimed and the Holy Cross is adored and presented before the people for veneration.

Calling to mind the time in which Christ was in the tomb, Mass is not celebrated again until the Easter Vigil, which takes place after nightfall on Saturday, March 31. The faithful gather after sundown to celebrate this lengthy Mass, consisting of four parts, which in ancient times would last throughout the night until sunrise as Christians kept “vigil” for the Easter dawn.

This year in the Archdiocese, over 2,160 catechumens and candidates will be brought into the Church through the Easter sacraments.

Throughout Easter Sunday, April 1, the Church celebrates the Resurrection of the Lord.