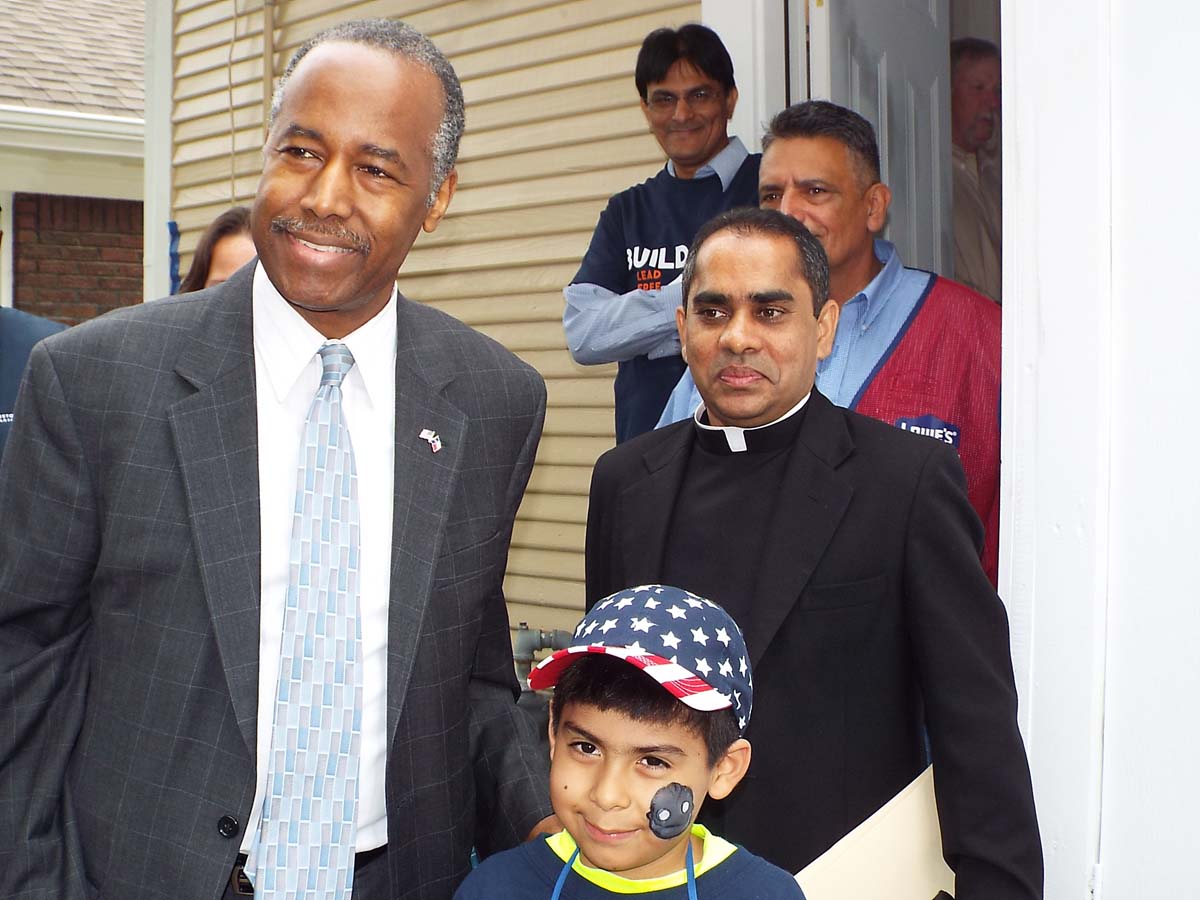 Although more insidious, lead in paint, outlawed after 1978, and other lead-containing materials can still be found around homes, contaminating residents and damaging brain and nerve cells, especially in children.

“We can’t afford to lose any of our people to lead, to mold, to violence,” Carson said after touring several nearby homes that had been renovated with lead abatement paid through HUD funding and coordinated through the Houston Health Department.

Holy Name pastor Father Anil Thomas, SVD, welcomed the U.S. Cabinet member along with Congresswoman Sheila Jackson Lee and city representatives on a stage set up outside the church. A festival atmosphere included games for children and health information booths for adults with music provided by the Northside High School band and 14-year-old singer Ashley Acosta.

Father Thomas said, “This is a true collaboration between faith and action.”

Six homes across the street from Holy Name at 1920 Marion were renovated with lead-free paint, new air conditioning, appliances and lead-free window glass.

Holy Name Church secretary Maria Rodriguez, who lived in a garage apartment also renovated behind one of the homes, recently gave birth to a baby before moving out for the remodeling.

“I worried when I heard about the lead. But I took my baby to a pediatrician and the blood test came out fine,” she said.

On average, $10,000 was spent per home and there have been a total of 3,072 homes remediated in the Houston area since 1995. But more than 90 percent of the homes in that neighborhood still contain lead, Houston Health Department officials said.

“We need to think holistically, upgrade these homes while keeping them as affordable housing for the community,” Carson said.

The current HUD grant amount is $2.9 million while the estimated amount of HUD grants since the 1995 inception of the HHD lead program is $32 million. The inspectors are paid through the grants so there is no additional city funding, according to Scott Packard of the Houston Health Department.

City Council member Karla Cisneros told the crowd, “We have the national spotlight on Houston and the near Northside with this lead-abatement program. There is no safe level of lead – contamination can happen with the amount of lead measuring a half-packet of Splenda (artificial sweetener) spread across the size of a football field.”

Stephen L. Williams, director of the Houston Health Department, and Loren Raun, bureau chief of Community and Children’s Environmental Health, and Dr. David Persse, physician director of emergency medical services with the city, said renovation of 3,000 homes that needed lead abatement is a good start, but much more is needed.

Williams said, “Housing is health. The communities need to learn of this and request their doctors do bloodwork to test for lead, especially in school-aged children whose intellectual achievements can be impacted.”

“We don’t want people evicted or living in the streets. But universal blood testing of lead is needed as a measure,” he said.

While city inspectors are working to test homes, residents have the option of checking their own homes with inexpensive lead tests found at home improvement stores. But most of those tests require sending samples to labs at additional costs.

There are several consumer home lead test kits people may choose to use for an initial assessment. Many of these kits give instant results and start at around $10. The Environmental Protection Agency provides additional information about kits and a list of agency recognized options are at https://www.epa.gov/lead/lead-test-kits.

Ben Hernandez, a principal at nearby Marshall Middle School attending the event, asked Williams how the students can be helped.

Williams said, “It goes back to primary care physicians. Kids need to be screened for lead. And this housing rehab needs to continue.”

But he said the 1,000 children a year who are found with high levels of lead are only a small percentage of those who need to be tested. For more information on a lead-safe home, call the Houston Heath Department at 832-393-5141.