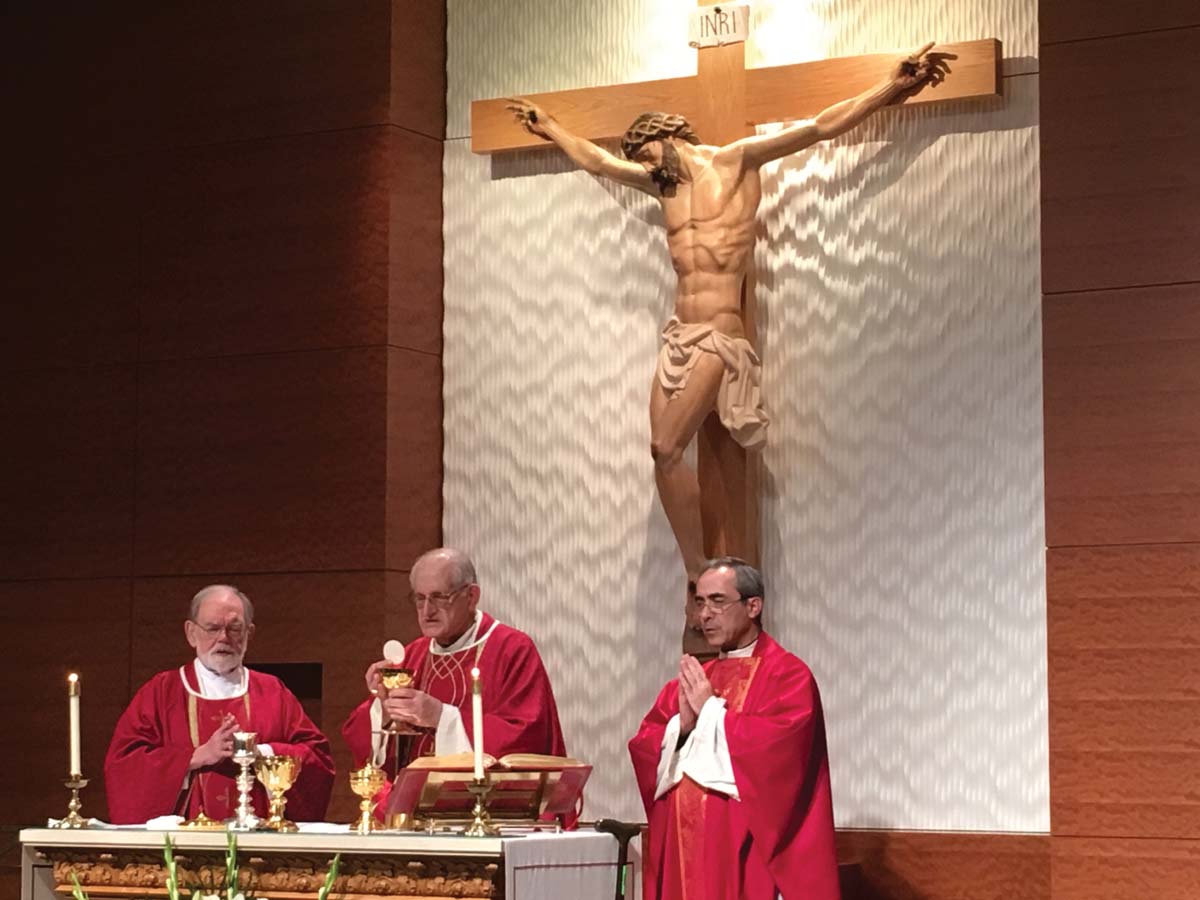 HOUSTON — Father Frank Vera joins the mission at Holy Cross Chapel and Resource Center, located at 905 Main St., as the new director. Formerly an engineer by trade, Father Vera has a Master of Science in Operations Research from Northeastern University in Boston and a doctorate in philosophy from the Pontifical University of the Holy Cross in Rome.

Ordained to the priesthood for the Prelature of Opus Dei in 2007, he began his pastoral ministry in Valencia, Spain, and then moved on to New York City and spent several years in Miami. Previously, Father Vera was the chaplain at Western Academy in Houston for six years before accepting the role as the new director of Holy Cross Chapel. Father Vera spoke to the Texas Catholic Herald about his new role.

What are some things that you are most looking forward to about your new position?
I look forward to get to know the many great people who work Downtown, and to find new and richer ways in which the Chapel can serve this important portion of our community.

What tasks do you do as the director of the chapel?
As a priest, my main mission Downtown is to celebrate Holy Mass and offer the Sacrament of Reconciliation. Another major part of my time is to offer spiritual guidance. Then, as director of the chapel, my mission is to make sure this great gift of our Archdiocese to the City of Houston continues to fulfill its mission well.

Will there be any changes of note for the community?
Not really. My intention is simply to continue implementing the original vision of the chapel as an instrument of the Church to serve the people who work and visit Downtown; the vision that Monsignor Albert Beck and Bishop John Morkovsky had back in 1982, which was greatly advanced by (former directors) Father Michael Barrett and Father Jerry Jung, and has now been entrusted to me.

Can you tell me some highlights for you personally from the 35th anniversary celebration?
On Sept. 14, the feast of the Exaltation of the Holy Cross, we celebrated 35 years of ministering to Downtown Houston. Archbishop Emeritus Joseph A. Fiorenza was the main celebrant, and the concelebrants were Auxiliary Bishop George A. Sheltz, Father Italo Dell’Oro, director for clergy formation and chaplaincy services, Father Jung, Father Barrett and myself. Many friends of the chapel joined us at Mass and at the reception on the second floor. It was a great joy to see so many people rejoice in the role that the chapel has played in their lives.

How do you see Holy Cross as both a chapel and resource center?
At times people have described Holy Cross Chapel as an oasis in the middle of downtown where people can find some peace to be with Jesus, away from the hustle and bustle. That peace is an essential resource that the Chapel provides and we want many to benefit from it. But we want the oasis to be not only a get-away refuge; we want it to also irrigate the land around it, to contribute to the life of this great, fertile field that is downtown. There are some professional associations that regularly meet at the Chapel. They were started by Catholics, but are not confessional in nature. They are open to all men and women of good will, to all who are open to dialogue with others in seeking a deeper understanding of human nature and God’s plan for creation.

Do you have any main goals for the chapel so far? Moving forward?
When we talk about goals we want a quantifiable measure of accomplishment, some numbers. While it makes sense to aim at increasing numbers, I don’t think that notion applies here, because the chapel is meant to be a resource for each individual person, an opportunity for a closer encounter with God. So, yes, we want many people to come to the chapel, and we are working on reaching more, but each person is, in a very real sense, a 100 percent accomplishment of the goal.

Would you like to share any sentiments of gratitude to your predecessor?
As I mentioned in my brief remarks at the 35th anniversary celebration, all the heavy lifting to make Holy Cross Chapel a reality has already been done by my predecessors. My gratitude should be expressed in my dedication to put all their work to good use.

Is there anything else you’d like to add about your new position, the anniversary or the chapel?
It is a great honor that Daniel Cardinal DiNardo was willing to entrust me with the pastoral care of “Main Street” and I ask for your prayers that I may serve as he hopes.