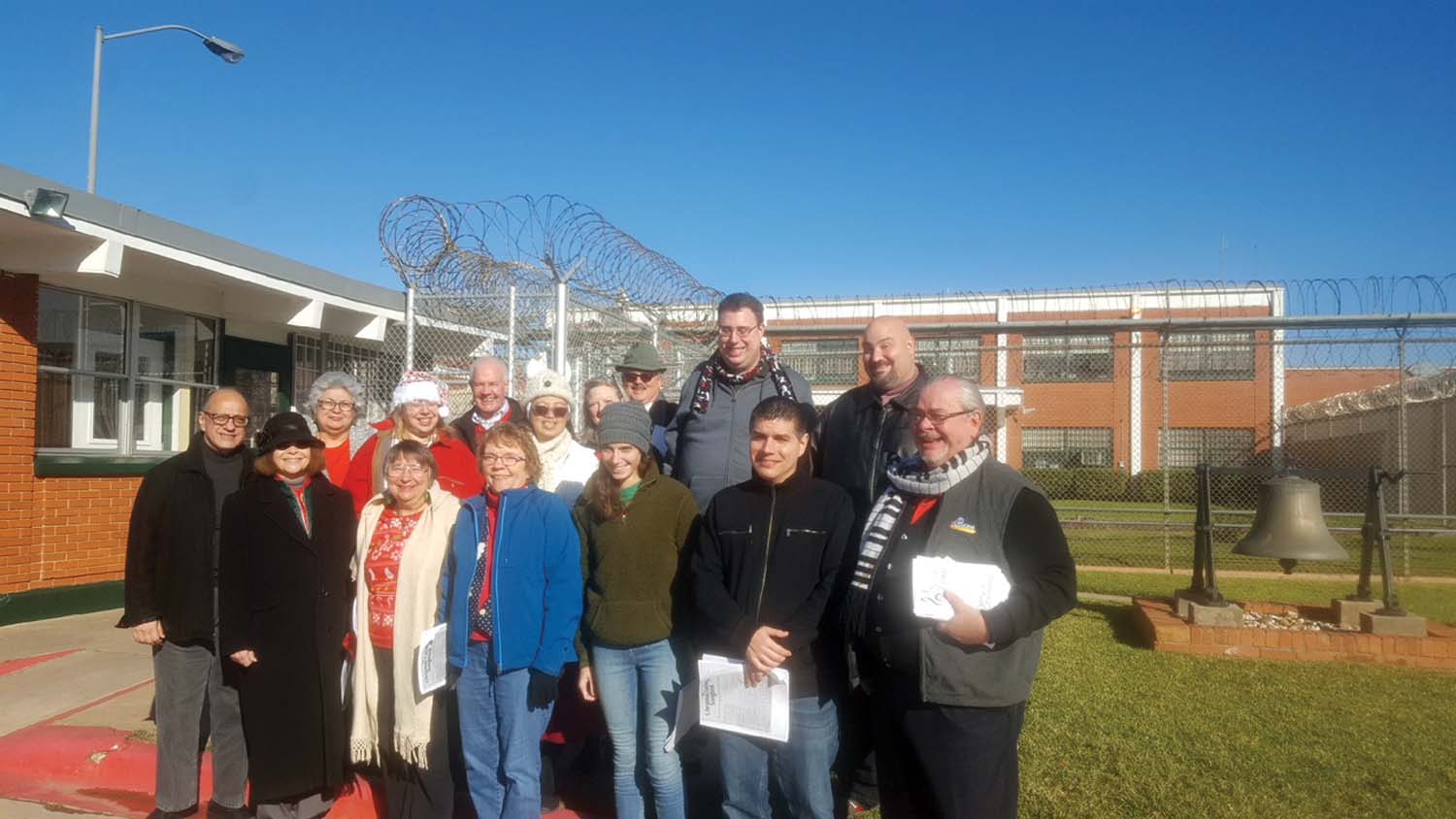 Dr. Rick Lopez, far left, of the Archdiocese of Galveston-Houston Office of Worship, leads members of the Archdiocesan choir to carol at several men and women prison units in Huntsville and Texas City in celebration of the Christmas season. They stand in front of the Stringfellow unit and also visited Ramsey, Terrell and Carole Young units. Photo by Deacon Alvin Lovelady/Office of Correctional Ministries.

HOUSTON — Maintaining the spirit of love and giving can be difficult in the frenzy of modern Christmas, but perhaps even more so for those trying to celebrate while being behind bars as inmates.

Yet the Archdiocese, through its ministers, volunteers and others dedicating their time and talents, share the true meaning of Christ’s birth with those in prison.

Lopez said, “We have people volunteering to share gifts God has given us with people who might not have the typical opportunities to celebrate.”

“But we are receiving just as much as we give with their gift of thanks,” he said of the event that has been organized annually since 2010.

The choir members travel in a bus together, beginning an early day of driving to men’s units in Huntsville and then moving on in the afternoon to the women’s Carole Young facility in Texas City. They carol to hundreds of inmates and prison staff.

“The high point of the day is when all the ladies in the women’s unit start applauding us as soon as we walk in. Our singers are both men and women and they are so touched by the warmth of the welcome,” Lopez said.

But it is a sad moment when some of the very same faces are seen again in prison as in the past years, he said.

Deacon Lovelady said, “It is our duty as Christians to make sure everyone has the opportunity to hear God’s word and that means wherever people are, no matter their circumstances.

“When we go inside the jails and prisons, we don’t force anyone to hear our message, or sit in on any lessons or Bible study we may make available to them. They are free to come to any service and hear the message we offer,” he said. “(Daniel) Cardinal DiNardo once told me ‘we must offer every one of God’s children the Sacraments the Church offers if they can receive them, even if they are in prison. We cannot deny them God’s healing words and our presence and that is why our ministry is so important.’”

Deacon Lovelady, who also belongs to Our Lady of Lourdes Catholic Church in Hitchcock, said volunteers and God’s word are the link to helping those incarcerated find the hope they need to change their lives. It is the driving force that keeps them from returning to prison after they are released.

“Living God’s word helps them find community. Isn’t that what we all want for our own lives?” he said.

Father Ron Cloutier, director for the past 30 years of Correctional Ministries for the Archdiocese, said, “When we talk to inmates during the holidays, many of them are lamenting that they are not with their families. So I ask them, ‘were you with your families when you were out?’ And they realize that they are fantasizing because most of the time, they were too high and not really with their families.

“It’s understandable that they are feeling their isolation and abandonment even more during the holidays, but I remind them that God is present to them always. We are here to represent Emmanuel for the inmates to focus on the presence of God. They may have the opportunity in prison to celebrate the true meaning of Christmas,” Father Cloutier said.

One of the Correctional Ministry’s dedicated volunteers, Jerry Trzeciak, a parishioner of St. Anthony of Padua in The Woodlands, has coordinated the Kolbe Prison Ministries — Houston North for the past year and a half. The volunteers participate in Christmas events and visit the inmates during the holidays, but they also are there throughout the year, he said.

Trzeciak organizes weekend spiritual retreats for the inmates at the various 13 units in Huntsville and Navasota, focusing on the six maximum security and two medium security prisons. Calling inmates “The Men in White” for the white uniforms they wear and our Brothers in Christ, the volunteers share their faith and give a listening ear.

Although earning a degree in criminology and serving an internship in an Indiana prison, Trzeciak said he did not pursue that career. But prison ministry “touched my heart.”

Conducting retreats starting Thursdays through Saturdays at a Texas Department of Criminal Justice (TDCJ) unit have major differences in prison. “We as a team cannot spend the night,” he said. “We are at times interrupted by guards, who need to do security checks or a head count.

“For a first-time retreat at a unit, we try to get at least 66 retreatants with 30 team members. Although we are open to all inmates and are ecumenical, we have a Catholic retreat, offering the precious Body and Blood and Reconciliation with our priests,” he said.

“After the retreat, we encourage our volunteers to reach out to the brothers, if not on a weekly basis, then semi-monthly,” the coordinator said.

He is excited about working with more parishes in an “Adopt a Unit” program where pastors and their parishioners can decide to conduct retreats or organize other projects for a particular unit.

“We are talking with St. Martha, Christ the Redeemer, Prince of Peace, St. Ignatius, Sacred Heart in Conroe and Sts. Simon and Jude. It’s about the effort from all who are called,” Trzeciak said.

All volunteers take a half-day of training offered by TDCJ unless it’s a performance group, who may just need clearance, which can take several weeks to gain permission.

“We’ll be taking a Life Teen band for a second time to play in February for the Ferguson Unit, which is called a ‘Gladiator Unit.’ Most of the offenders there are younger, have aggressive tendencies and tended to be gang members,” he said.

The three-hour program also includes Scripture readings and reflections by ministers. When the band played last year for the first time, 300 inmates attended, he said.

“The data shows when these programs happen, Baptisms and Rites of Catholic Initiation of Adults increase significantly,” Trzeciak said. “No one is beyond Christ’s love.”

In quoting Matthew 25: 25-40 that includes “I was in prison and you came to me,” Trzeciak said, “We feed them well, both with food for the retreat and with the Word of God. We clothe them with a suit of armor against the lies of Satan.”

“I felt Him calling me, but others tried to convince me not to go,” she said. “I went to an organizational meeting at my parish, filled out the application form and went to training class.”

Now Orton has been going to the women’s Carole Young unit in Texas City almost every Saturday morning for three years.

“I can feel God using me. And I get as good as I give,” she said. “I don’t memorize and quote Scripture, but I have love in my heart and sit and listen.”

“There is one inmate who just graduated with her Master’s degree in Theology that she studied while in prison. She’s brilliant,” Orton said. “There was another lady, in her 80s in a wheelchair, who said the first time anyone touched her with love was at our retreat.”

Deacon Sid Cammeresi, of Our Lady of the Miraculous Medal in Texas City, coordinates the volunteers at the Young unit and convinced Orton to volunteer.

As part of his dedication, the deacon received approval from prison officials and the Archdiocese to organize a Mass or Communion Service for the inmates on this Christmas Day.

“That is our whole point – to give unconditional love, as God gives to us, without strings attached,” Deacon Cammeresi said. “These are rough and tough women when they come to our retreats and they leave changed.”